Waking up to a Woodlark

I had planned a long lie in this morning, this never usually comes to fruition though (which I'm mostly glad of coz it's a bit of a waste of life really) I was woken first by a text from Steve who'd seen some Pintails, followed shortly by another about an Iceland Gull. Neither of these stirred me too much, the next one from Phil did the trick though, he'd seen a Woodlark near to Rousden Barns, after phoning him and learning that it was showing well, down to thirty yards and photographable! I was up, dressed and out in a flash!! I rushed out to the car only to find it encased in ice, so much so that the locks were frozen solid! When I eventually arrived I could see Phil and Steve packing away their scopes. Not good, not good at all! Yes, it had flown off, but as you are probably aware from Steve's blog Phil spotted a small flock of the little beauties in the next field, they were very mobile, giving us ample opportunity to count them but not take any photos. There were seventeen of them in the flock and the single 'Billy no mates' one was probably an eighteenth. I was keen to wait around for better views and a digiscoping opportunity but had rushed out in the wrong clothes and also without breakfast, so reluctantly headed off home ...

After breakfast and dressing up like a mountaineer I popped back up to Rousen to walk the dog. I had great views of a Peregrine having a crack at a flock of Skylarks and when I looked towards the fields where we had seen the Woodlarks earlier I could see a birder wandering around, I didn't recognise him from a distance but it turned out to be Nick. 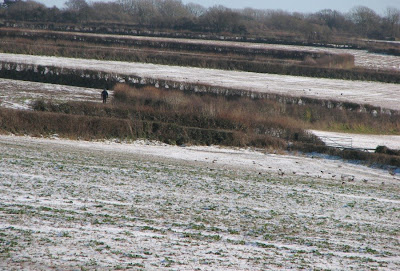 Fields below Rousden Barns, Skylarks visible just landing to the right and the figure just to left of the hedge is Nick.
Nick had been looking for the Woodlarks without success. I showed him where we'd seen them this morning but there was no sign of the flock. We eventually spotted 'Billy no mates' though, who stayed put long enough to give some great views. As soon as I got my camera out though he started a thirty second countdown, allowing me about five shots! I made the most of them and got three of the ground, one beautifully focused one of its rear end, and one of them blurry, just running off the edge of the frame type ones. We also saw a belated patch year tick. a Red-legged Partridge, which appear to be very thin on the ground this winter. We also flushed three Roe Deer from cover, they looked superb gamboling across the field in the snow, very 'Bambiesque'. Here they are along with the blurry Woodlark: 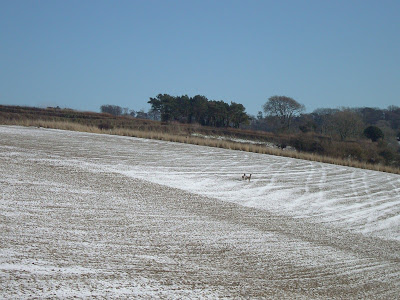 Specky Deer , but the snow and sky look nice. 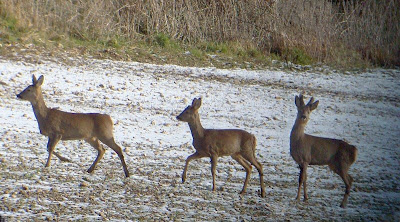 And in glorious close up 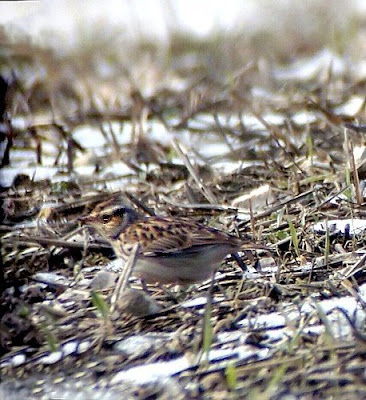 'Billy no mates'. Best viewed by standing (or sitting) several feet from your monitor and squinting a bit, or indeed removing reading glasses! (Don't waste any time opening this, it doesn't enlarge) If you want to know what Billy really looks like take a look at Steve's lovely photo instead.
While looking for the Woodlarks my scope blew over AGAIN. This time from the height of a fully extended tripod! I was very fortunate it wasn't ruined. It did sustain some damage, by landing on a rock or two! 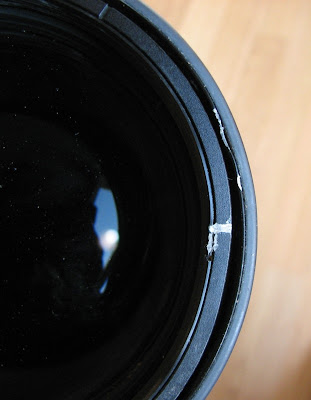 Phew! That was close! As you can see it's dented the rain guard/outer sleeve thingy and chipped a piece out of the metal around the objective. A millimetre further to the side and I'd have had a cracked lens!
Guinea Pig Update
The Guinea Pig I found last Sunday is doing well now. After a massive stoke of luck being found in the first place, ( because he'd surely have frozen to death that very night otherwise) his luck has been continuing all this week. He's being thoroughly pampered: 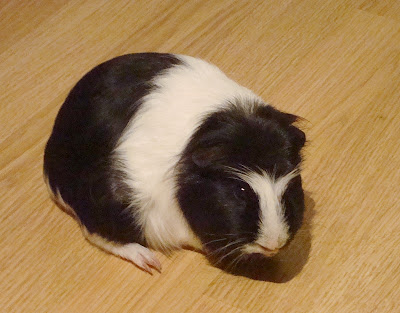 During the week I've provided Bramble with three wondrous gifts: 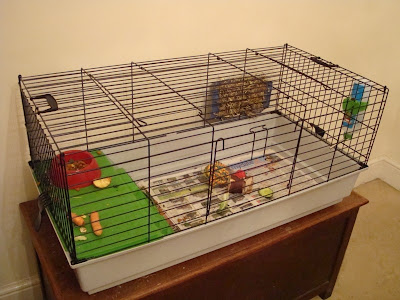 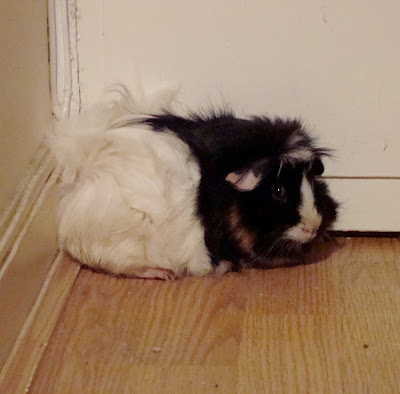 and a lovely lady friend.

He has to wait until Tuesday for his third 'gift' and what a treat it will be. I've booked him into the vets to get castrated! Hard luck Bramble, you can't win 'em all!
Posted by Karen Woolley at 9:37 pm