It Was All So Horribly Predictable

Yesterday the humble Axe Estuary saw numerous visitors all hoping to see the Caspian Gull which had shown on the three previous days, some spending many many hours waiting patiently and hopefully, scanning the hundreds and hundreds of gulls, but alas, it was a no show. So when I received a text from Gav this lunchtime it was a horribly predictable one " Caspian Gull opposite Coronation Corner again". I immediately felt pangs of sympathy for all yesterday's unfortunates. Didn't stop me popping over there to 'fill me boots' though. I'd been unwell when it was showing so well on Wednesday. If you dipped yesterday and are reading this, firstly why? And secondly, you may want to look away now! 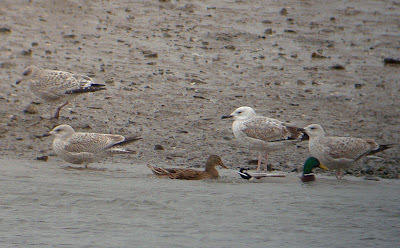 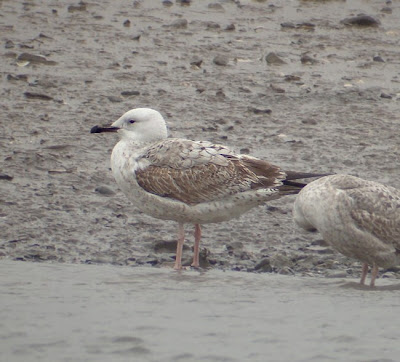 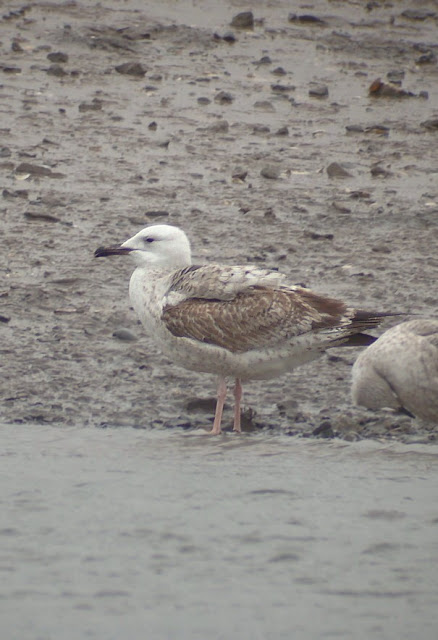 Firstly, just in case anyone cares, sorry for lack of blogging recently I've just been too busy because we are in the process of trying to move house. We have somewhere lined up now and are just waiting for the green light, hopefully all being well we'll be in by the second week of January. I really needed to have a break and get out in the field today and despite the persistent rain decided to pop down Seaton Marshes to try and see the December Wheatear. Leaving this until the nineteenth of December probably wasn't the best plan I've ever had. It wasn't there needless to say. I was just trudging back to the car when I got a text from Gav, which said "Caspian Gull at Coronation Corner now!" I took this as an order and dutifully drove round there straight away. It was a full scale local twitch and I think Gav was pretty surprised when I was the first to arrive. This was my second Caspian Gull on patch and it was much further away than the last one. Still, I was able to see all the salient features reasonably clearly (when Gav pointed them out that is!) including a very obvious 'ventral bulge' which I thought made it look a bit like it was 'wearing a nappy', a nappy requiring urgent attention! I took a few snaps but none of them came out particularly well. 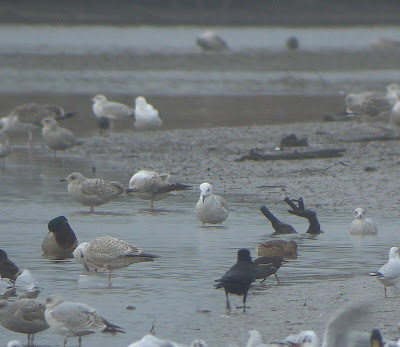 My clearest shots were always when it was head on which didn't show much
except perhaps the whiteness of the bird's head. 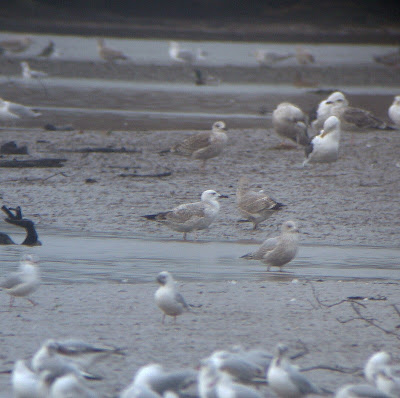 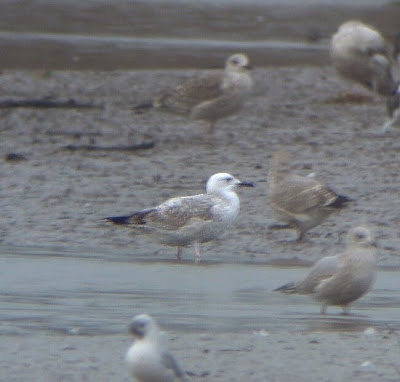 This is a heavy crop of the photo above, quite awful I know
but it does show that 'saggy bottom' beautifully!
As well as having no time for birding I haven't managed to do much astronomy either (feel free to stop here if astronomy bores you), seems like ever since I brought myself a good telescope the weather's been almost permanently cloudy, or windy or usually both! I have had some more superb views of Jupiter though and got a 'record shot' of it showing the Great Red Spot (which is actually a beige spot this year) and one of its moons, Io. 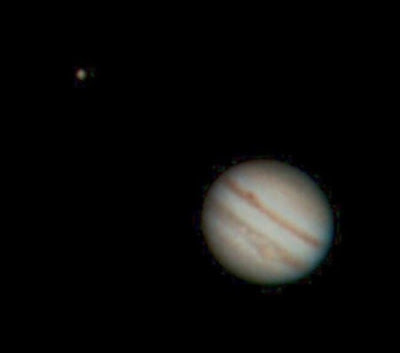