Well, having gotten back home from the Scillies late on Monday night it's been all go all week, I just haven't had time to get anything up on here. I should really have been trying to catch up with the house work (leaving two teenagers to fend for themselves for almost a week ( eighteen and seventeen before anyone thinks to report me for neglect) means coming home to a bit of a mess! My daughter phoned me on my second day there and said " We've got no plates left" When I suggested she might try washing some she replied "But I don't have time" Where did I go wrong?!) I have spent more time trying to catch up with a Great Grey Shrike though. I'm not proud of myself. More about that later. Firstly Scilly, it was another very enjoyable week, well mostly, there were a couple of real downers, but that's why we love birding isn't it?

Plenty of 'rares and scarce' about, including, Black Redstart, Ring Ouzel, Firecrest, Jack Snipe, Dotterel, Yellow-browed Warblers, Little Buntings, Lapland Buntings, Snow Buntings, Turtle Dove, Wrynecks, Subalpine Warblers, Pectoral Sandpiper, American Golden Plover and others probably. I wont embarrass myself by telling you which ones of these I didn't even 'connect with' all week, but three of them have Bunting in their names! 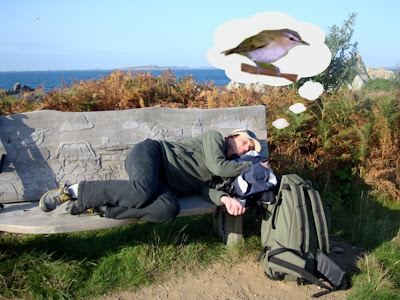 Remember this from last year, well, now I need dream no more.
My most wanted bird Red-eyed Vireo well and truly in the bag!!
"What do you think of it?" Bun asked after my initial view, I couldn't answer, I was actually choked up and almost in tears. Don't ask me why! Bird of the year definitley! 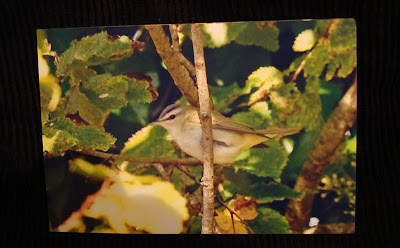 photo by Steve Young
This is a photo of a photo of the actual bird. I purchased it at the Scilly Log.
The photographer Steve Young was standing right alongside me while he was taking this shot, so it really takes me back there when I look at it. I hope he doesn't mind me putting it on here, as a peace offering here's a link to his most excellent bird photography website Birds on Film
I didn't get any photos of it myself as it was too mobile to digiscope and my super-zoom was playing up, in fact I didn't get any good photos of anything this year really. What I did manage to digiscope was pretty dismal due to using the ED50. It was a real pleasure to carry around though, I didn't even know I was carrying it a lot of the time. In some ways I think I'd have preferred to suffer a bit carrying the big scope and got some decent photos. I'll  just have to go to the gym before my next visit! Here's a sample of what I did get. 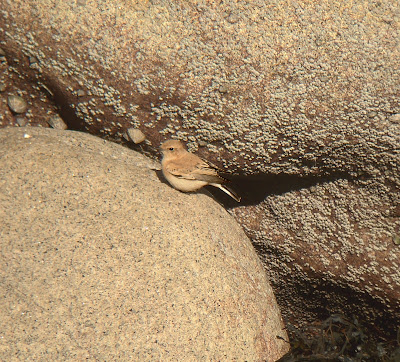 Black-eared Wheatear.
Probably the rarest bird I saw but definitley the dullest. I wouldn't say no to a nice male one though! 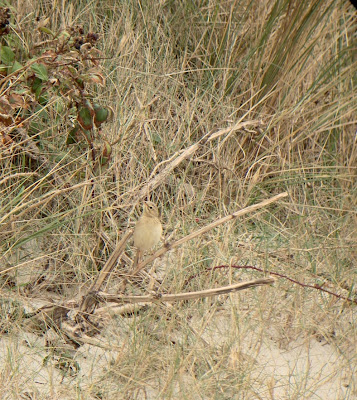 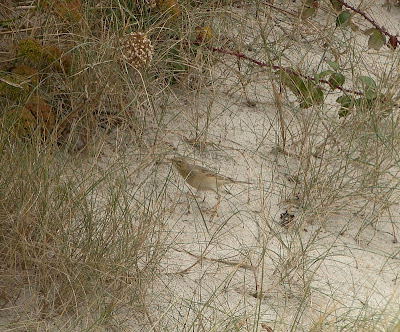 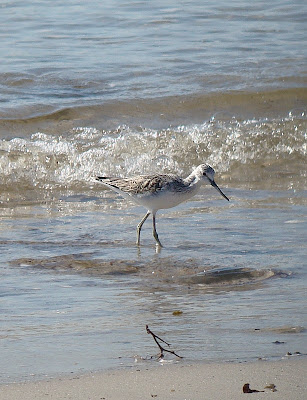 Greenshank.
What? Well, I was bored at the time and we don't get them on the beach here in Seaton. 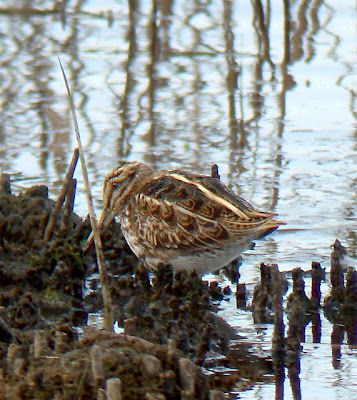 First ever photo I've managed to get of a Jack Snipe 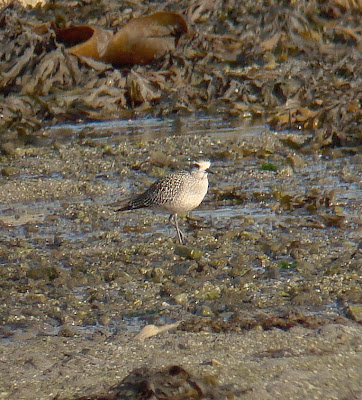 Yawn... American Golden Plover.
My highlights were obviously the Red-eyed Vireo, but also the Red-breasted Flycatcher a gorgeous little thing, shame the views were quite brief. The Tawny Pipit was also surprisingly nice... for a Pipit. I had very good scope views of both the 'Hippos' so should have no excuse for getting it wrong when I find one. Another massive highlight was watching a pod of around 200 Common Dolphins some leaping completely out of the water at times, a really unforgettable experience, simply brilliant! :-)
Another unforgettable experience was the utterly horrible dipping of the Pied Wheatear. On Gavin's blog he says that he and Sandra couldn't have been further away from the bird and still be on St. Mary's. They could have. They could have been where we were at Giant's Castle. We also had no phone reception and had to ask a friendly shopkeeper to phone a taxi for us when we got to Old Town. We were about 400 metres from the 'stony field' when we heard the bird had been flushed. We weren't alone either, many birders missed out due to the actions of the selfish minority. At the aftermath of 'The Great Pied Wheatear Dip' I was lucky enough to see my first ever Convolvulus Hawk Moth, I didn't appreciate it much at the time, I'm ashamed to say I was sulking, don't think anyone noticed though! ;-)
A few other pointless Scilly shots: 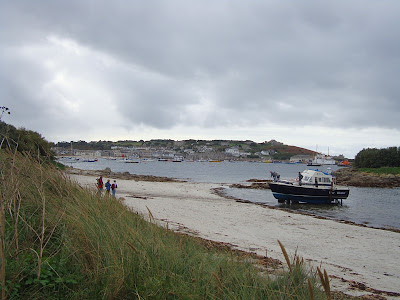 View from Porthloo towards Hugh Town.
On the only cloudy day of the whole week. 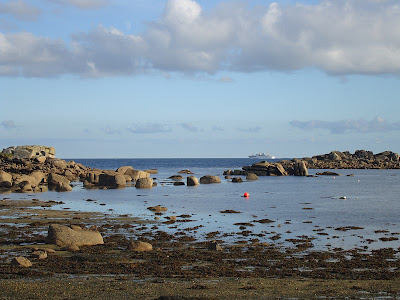 The Scillonian from Old Town 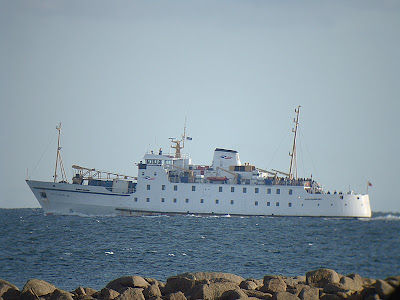 The power of digiscoping, impressive ain't it? ( The magnification not the boat) 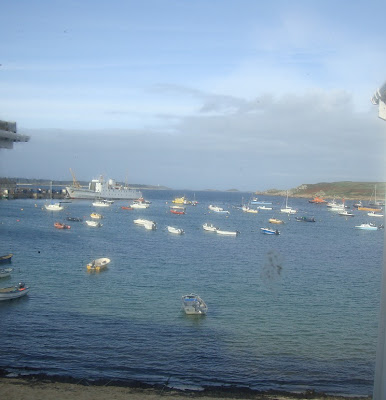 View of Hugh Town Bay from the window of our accommodation, complete with Seagull poo!
So much better than a freezing tent on the Garrison, much more in keeping with my advancing years too! 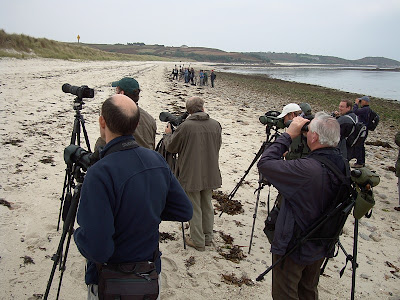 A 'twitch photo' coz they're always popular.
This one is the Tawny Pipit on St. Martin's 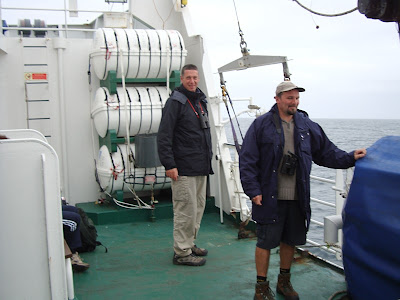 Two doddery old geezers I spotted on the Scillonian on the way home.
During Wednesday and Friday this week I spent a total of five and a half hours wandering around Aylesbeare Common looking for the Great Grey Shrikes that have been seen there recently. On the Wednesday I dipped but did have superb views of at least nine Dartford Warblers, four in one bush! It's good to see that they've had a good breeding season this year. I hope it doesn't come to naught when they're all eaten by a Great Grey Shrike! On Friday I eventually got some good if distant views of one of the elusive birds, the other having moved south slightly to Woodbury Castle. 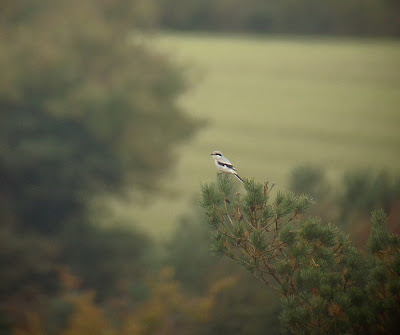 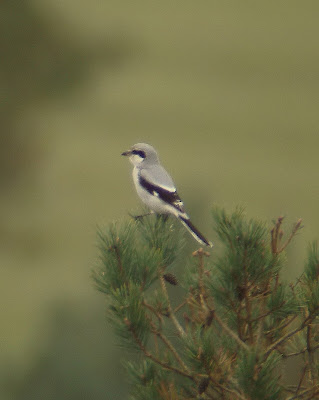 Always worth the effort.
On the day we left the Scillies a Red-flanked Bluetail turned up on St. Martin's and has been showing well ever since. This made me all the more eager to see one. Although there have been a record number in the country this year it may not be a general trend, so I thought best see one while I can. The nearest one by far was the one at Sandy Point, Hampshire, and that's where Bun and I headed first thing this morning. We arrived just five minutes late for the 'first showing' and the second didn't come until an hour and a half later. Bun saw it. I didn't. We had to wait another hour or so for it to appear again but this time I was among the lucky few who managed to get on it in the tangle of vegetation. Whilst standing in the freezing cold and seeing nowt I began to seriously think I must be bonkers " What was I doing this for? It's horrible, I'm giving up this twitching lark" All that negativity immediately evaporated with my first glimpse of the gorgeous little beast. Definitley worth the suffering, definitely! Bird of the year for sure! Red-eyed Vireo reigned supreme for all of six days. I'm so fickle. Mind you I didn't cry when I saw the Bluetail, not even a little bit. 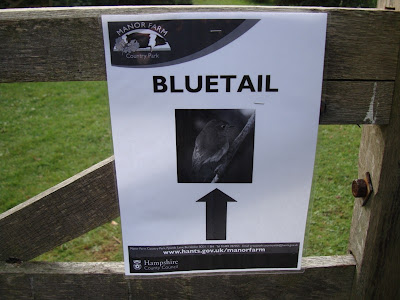 One of the helpful signs showing the way to the reserve, complete with stunning photo of a Grey-flanked Greytail. See  superb photo of the actual bird here. 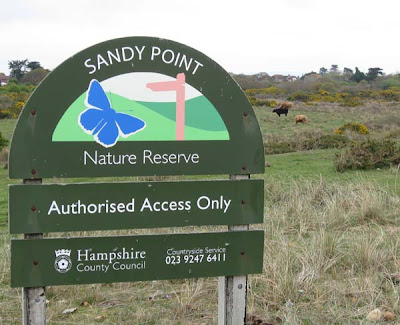 The reserve is apparently such a sensitive site that it's a 'closed site'
with access by prior arrangement only. I think not.
Obviously dogs can't read but I doubt that the good dogs of Hayling Island walk themselves. The place was littered with dog doings
Posted by Karen Woolley at 11:15 pm 2 comments:

What a day! Firstly this morning, Bun and I popped down to 'The Lost Gardens of Heligan' in Cornwall to see the Green Heron that has been there for a few days. We enjoyed superb views (before the crowds got too big, it's a very popular place on a Sunday!)) and saw it catch and devour a fish, a dragonfly and a vole! 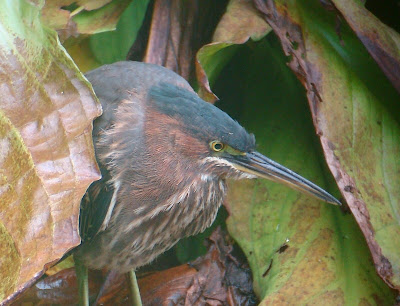 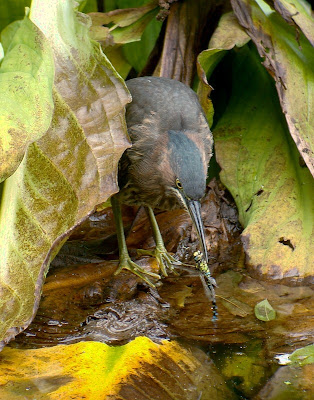 I just happened to have been shooting a bit of video when it  very deftly caught this
Southern Hawker.
This evening I didn't make my usual Sunday evening trip down to Black Hole Marsh, because I'm off to the Isles of Scilly in the morning and I hadn't started packing yet! I definitley should have done though! I'd just gotten out of my bath when I got the call from Steve, he'd only gone and found a Solitary Sandpiper!!! A bird he's always said he'd find on patch one day! I was down there within ten or so minutes, the light was fading rapidly but the bird was nice and close. It was very noticeably smaller and more delicate than the Green Sandpipers nearby and had a very obvious white eye-ring. Eventually all five of the birders present saw it in flight and saw the dark rump with barred sides, the clinching feature. What a great find, a first for Devon apparently. It's a shame a couple of the local patch birders are away on holiday. It was just too dark for photos by the time I arrived but I attempted a bit of video. You can see a bird but you'll have to take my word for it as to what bird it is!
Posted by Karen Woolley at 9:45 pm No comments:

Seeing as Sunday is one of only two evenings that I'm not at work I always like to go down to Black Hole Marsh or Colyford Common if I can. Here I usually enjoy the peace and tranquility, the birds and sometimes the company of one or two local birders too. I knew this evening wouldn't be anything like that because a while before I ventured down I'd received a text from Ian Waite telling of a Grey Phalarope on Black Hole Marsh. When I arrived there were about twelve people on site which increased to a maximum of twenty, the most I've ever seen here and definitely a taste of things to come, for the new hide is nearing completion. The bird was showing well. Showing well behind the bank that is! 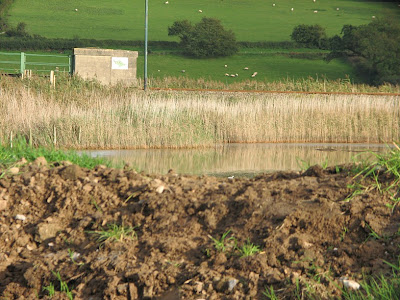 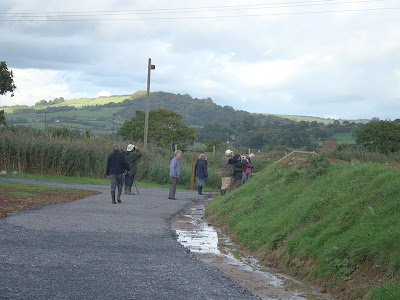 Lots of people trying to see the Grey Phalarope. 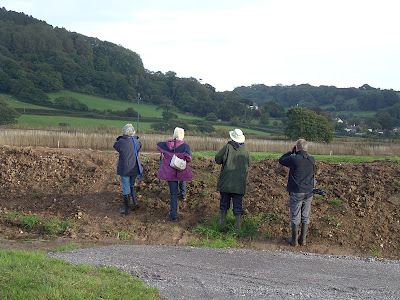 Eventually very slight naughtiness just has to ensue.
I call this photo 'The Four Degrees of Ever So Slightly Naughty'
Later I partook of a bit of naughtiness myself. Actually I was no more naughty than the good people pictured above. However, my scope was very naughty indeed! 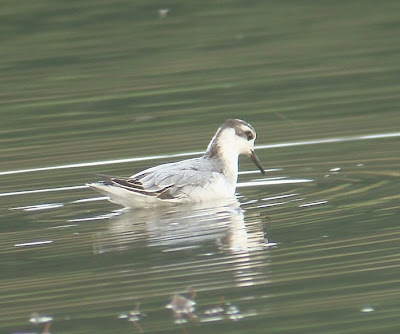 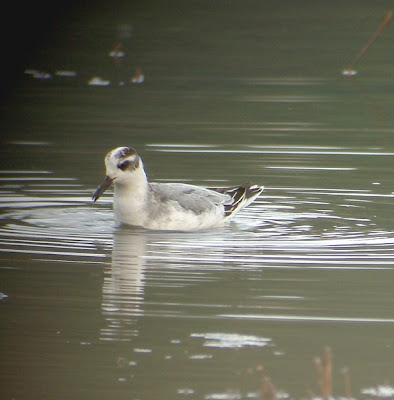 On Thursday morning I was up on Beer Head where I didn't see anything worth reporting but I took this atmospheric photo of  Seaton and the river valley shrouded in valley fog. 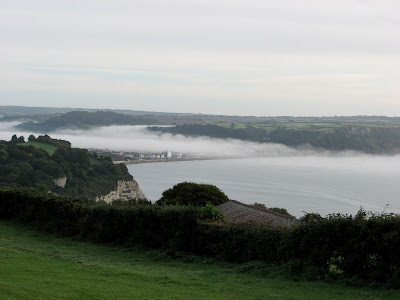 It's taken me hours and hours to get this post on here. The new blogger photo uploader is just awful, locking up and causing my computer to keep crashing. Anyone else having problems with it? Also why does it let you upload several photos but insists on putting them all on your blog in one go? It's a nightmare! (Excuse the hyperbole, I doubt anyone would actually have a night terror due to a photo uploder). If it doesn't start working soon I'm gonna have to defect to WordPress or stop altogether, far too time consuming!! No fun at all =(
Posted by Karen Woolley at 11:22 pm 3 comments: