One from the archives that I just haven't found the time to slot in. I found these in Morganhayes Wood in the middle of June. I see them most years, in fact I always smell them first. I have a particularly acute sense of smell which I'm not altogether sure is a blessing, however it's not needed to smell this beast! 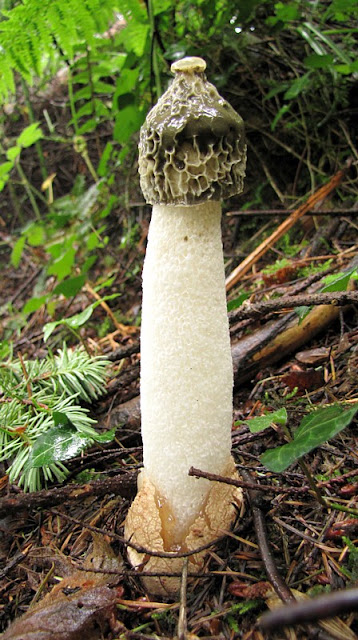 Phallus impudicus or the Common Stinkhorn.... Say what you see.... and smell!

Even though I've seen loads of these over the years these were the first ones I've seen with all the gleba ( greeny brown smelly goo or more correctly spore mass) in situ still. 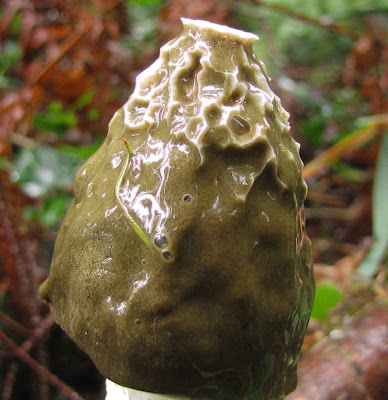 Mmm... lovely. Still, flies love it because it smells like a rotting corpse.
They walk on the gleba and carry it off on their little tootsies to spread around the woods.

It's all in the name.
Botanist John Gerard called it the "pricke mushroom" or "fungus virilis penis effigie" in his General Historie of Plants of 1597, and John Parkinson referred to it as "Hollanders workingtoole" or "phallus hollandicus" ( Hmm...Not sure if that's meant as an insult or compliment!).Linnaeus (1640) was responsible for the fairly obvious genus name. Its specific epithet, impudicus, is derived from the Latin for "shameless" or "immodest". 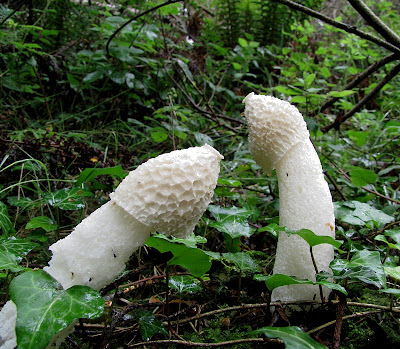 Old specimens without the gleba.

Anyone interested in fungi has probably heard the story of Henrietta Darwin (Charles Darwin's erotophobic daughter) and her one woman crusade to rid the local woods of the fungus.


In our native woods there grows a kind of toadstool, called in the vernacular The Stinkhorn, though in Latin it bears a grosser name. The name is justified, for the fungus can be hunted by the scent alone; and this was Aunt Etty's great invention. Armed with a basket and a pointed stick, and wearing special hunting cloak and gloves, she would sniff her way round the wood, pausing here and there, her nostrils twitching, when she caught a whiff of her prey; then at last, with a deadly pounce, she would fall upon her victim, and poke his putrid carcass into her basket. At the end of the day's sport, the catch was brought back and burnt in the deepest secrecy on the drawing-room fire, with the door locked; because of the morals of the maids


A couple of things always puzzle me when I read this, firstly, if  'the maids' were in fact that innocent  why protect them from seeing the  fungus because surely they wouldn't have any idea what it resembled would they? Secondly, what strange behaviour to take the stinkhorns home and lock herself in the drawing room with them. They are very delicate and could easily have been squashed/flattened in situ. "The lady doth protest too much, methinks " comes to mind .... I can't help wondering if she lined them up and admired them!?
Posted by Karen Woolley at 10:22 pm 1 comment:

On Saturday evening a 'few' Great Shearwaters were reported from Porthgwarra. Never having seen one of these awesome birds I was as mildly gripped as I usually am. Who am I kidding? I was extremely gripped because the 'few' were no less than 2003!! This was it, this was my chance! If that many were in the area on Saturday evening then there must be at least one left by the morning, surely there must? I was even confident enough to delay leaving Seaton until 6.00am, not wanting to get over-tired like I did on a trip to Pendeen Watch back in July. (Oh, I didn't tell you about that did I? I saw my first ever Cory's Shearwater, but got wet, cold and extremely tired, broke my daughter's umbrella (resulting in a good telling off when I got home) went to 'visit the bushes' at the most inopportune moment and thus missed the closest Cory's that passed and was so tired on the drive back I bumped up a high kerb and wrecked my car's wheel. I didn't feel like talking about at the time. Still I saw Cory's Shearwater, so mustn't grumble! ;-) ) (See a photo of Bun and me enjoying the delightful conditions HERE on Jonathan Lethbridge's superb blog, Wanstead Birder) So once Bun eventually replied to my text message, a six o'clock start it was. We arrived at Porthgwarra at 8.45 and could see a small group seawatching just by the entrance to the car park. When we were close enough to hear them we could tell they were seeing Great Shearwaters, in some numbers too. We set up our scopes behind them, I pulled off the lens cover, put my eye to the eyepiece, focused in on the water and there right in centre of my field of view was a Great Shearwater, how easy was that! Then another and another, one was really close, close enough to see all the features clearly. Apparently I embarrassed myself as usual by making an excited shriek and various exclamations of joy and wonderment. We decided to walk up to the main seawatching area on the cliff tops where there is a greater field of view and also the Runnel Stone marker buoy, which is a great help for getting each other onto passing birds. In the next hour and a half we saw at least 49 Great Shearwaters, eight Sooty Shearwaters and a single Great Skua. After this the weather closed in, and as showers gave way to persistent rain, the passage of Shearwaters stopped.  We left at 2.15 and were back in Seaton for 5.00 after an incident free journey this time. Quite a good day then! 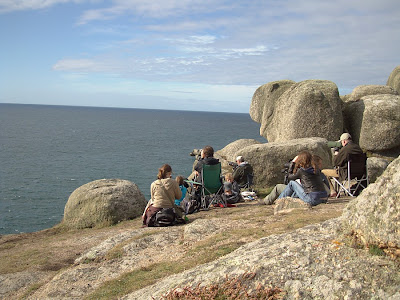 There weren't that many folk there considering. Several of these had been here the previous day and had come back for more. It's nice to see a good mix of sexes and ages for a change.
Note the glorious weather too....it didn't last. 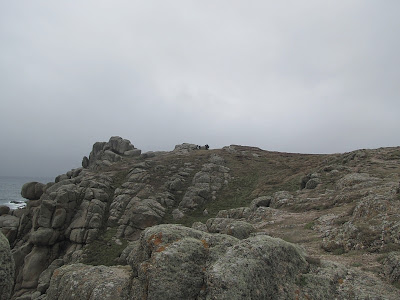 A few hours later the weather's very different and only three remain. Can't see them? Well this is another occasion where my super-zoom 'comes into its own' 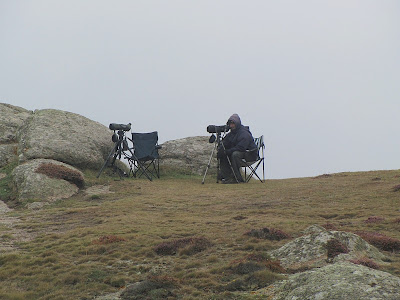 Taken from the same spot, here's one of them and my empty chair. I'd wandered off to try and get a photo of the Gannets which were passing close below but that's where my super-zoom lets itself down, they were just too quick for it to focus on. Still here's one of my better efforts. 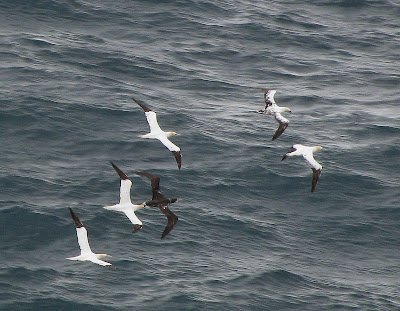 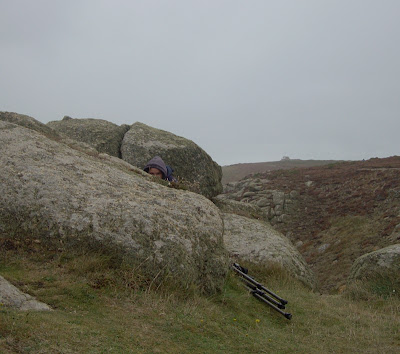 After the initial couple of hours of good seawatching we spent most of our time like this.. 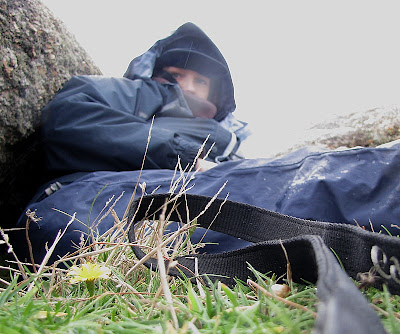 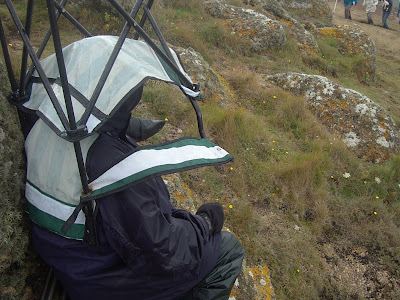 ...and even this.
The group of women walking by in the background were laughing at Bun's lack of British character in hiding from a spot of rain. What else could it have been? 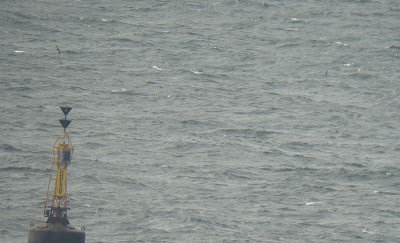 There are two Great Shearwaters in this view, honestly! 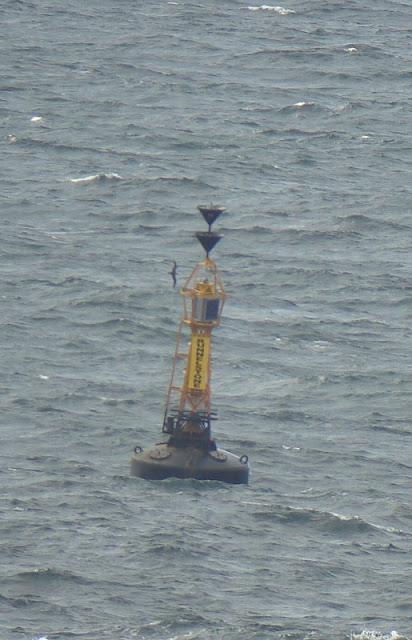 Great Shearwater passing some distance behind the Runnel Stone. 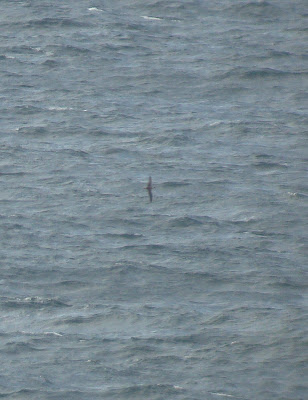 This is the closest one that I managed to 'photograph'. Shockingly bad but if you look closely you can actually see the white collar and tail patch. 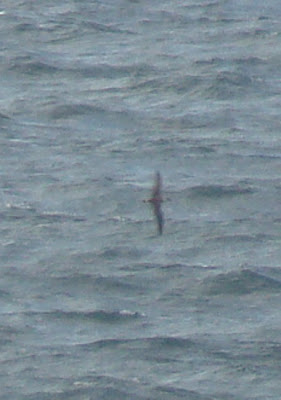 A crop of the previous photo.
The views were a gazillion times better than these lame images would have you believe. Still, I'd love to see one from a boat someday. 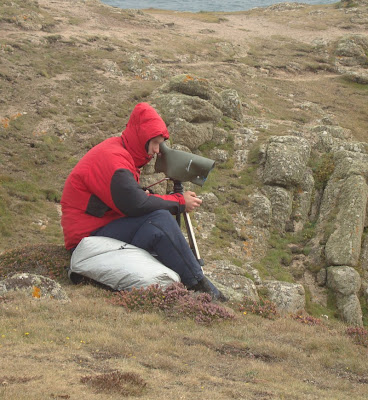 Finally, recycling at its best! How ingenious. Great use for an old welly.
Posted by Karen Woolley at 9:57 am 4 comments: