I haven't found the time to blog recently and haven't read many either, so when I tried to open a photo in one the other day I was shocked to find that they now open in a horrible format called Lightbox. Even if you do find it aesthetically pleasing  ( I don't, you may have noticed) its main drawback is that when a photo is opened (clicked on) it just appears the same size, which is of little use if the image is meant to be viewed larger.  The good news is it can now be disabled in the settings menu. I've done mine, which would be useful if I ever posted anything!

While I'm ranting here's another thing to rant about, the continued despoiling of  my beloved Seaton,  once a backwater extraordinare! Yes, it was a bit run down but that's what gave it its charm and kept it quiet. Now the once peaceful birding sites along the river valley are major 'leisure' honey-pots and the town centre is being swallowed up under the monstrosity which is the new Tesco 'Eco-store'  whatever that is!? They have more lights in the new carpark than the average airport. Today I was very saddened indeed to see that yet more premeditated dendrocide is on the cards. 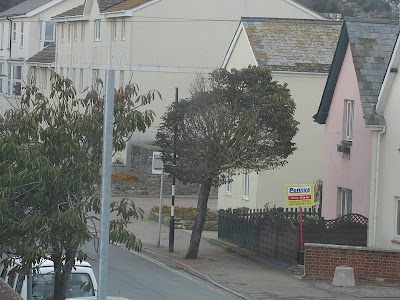 Here's the proposed victim. It beggars belief why when Harbour Road is about 95% tree free they should decide to stick a zebra crossing here. This tree is a lovely flowering cherry which used to really brighten up the place in the spring. It's also the favourite singing perch of a local blackbird. Why a crossing here anyway, nowhere near the new store? One side of the road's houses and on the other side Harcombe Trailer Centre, a few houses and a Bradfords Builder's merchants. Obviously of  the greatest attraction to pedestrians! Don't know what the grey pole in the foreground is going to be yet, it's wired for electrics, it's right opposite our house, ooh, I can't wait to find out.
On a brighter note I thoroughly enjoyed a patch tick yesterday morning, a Richard's Pipit in fields near to Beer Cemetery. I'd seen one on the deck a couple of years ago on Bryher but hadn't heard one call until yesterday, so now I know what to listen out for. I find you can never really get to grips with a bird's call until you've actually witnessed it coming from the bird itself, if you know what I mean. 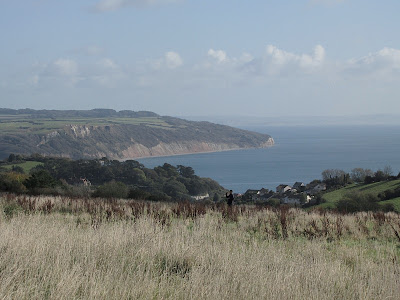 A Richard's Pipit is in there somewhere to the left of Gav.
You should be able to enlarge this if I've successfully disabled Lightbox.
I was disappointed not to be able to go to the Scillies again this year because I couldn't get the week I wanted off work. To take my mind off it a bit I took the money it would have cost me and bought this. 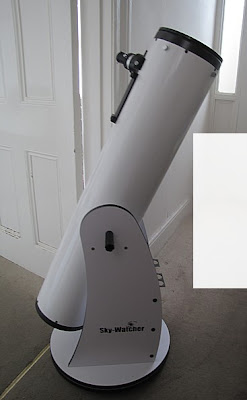 I might be able to spot the odd Eagle out at sea with this!
It's an 8" Newtonian  reflector on a Dobsonian base also known as a Dob or a 'light bucket'  for obvious reasons!
Twenty or so years ago I was really keen on astronomy, I had a really crappy little scope back then and could only dream of getting something decent. Scopes were very, very expensive. I was pleasantly surprised when I discovered just how affordable they are these days, easily cheaper  than spending a week sleeping rough on the Scillies!
The best thing about astronomy is that the vast majority of the things which you might want to see aren't ever going anywhere and the only limiting factor in seeing them is how long you can live for! :-( The time and distances involved are simply mind-blowing!
Jupiter's been showing well recently and nearing opposition on October 29th meaning it's only a mere 369 million miles from earth. Close enough to digiscope it I'd say. 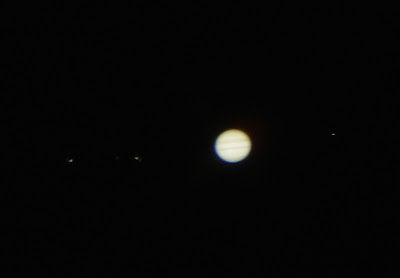 With three of the four largest moons showing

I was amazed how much detail I could see at 200x. 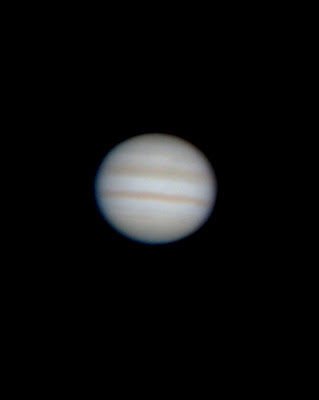 Crop of above photo.
Posted by Karen Woolley at 12:03 am 1 comment:

Three Years and Counting...Well, Only Just!

On the 15th of September this blog was three, yes, THREE years old. I really can't believe I've been finding enough material to keep going so long. I was going to put on an anniversary post but circumstances prevented it (eldest off to university amongst other things)  and since then I've kinda got out of the habit. I've still got a few things from the summer that I really want to get on here (as a personal record for me as much as anything) and although I've not been out and about that much recently I've a few bits and bob to talk about. I've actually had two lifers over the last few weeks, the first being the Semi-palmated Sandpiper that was found on patch a week last Saturday. I didn't see it until it had been around for a whole three days! How slack is that? I was due in work when it was first found and the next day I went to Burpham in West Sussex with Bun and Nick to spend over five hours standing by a field. What fun that was! ;-) I finally caught up with the Semi-P on the estuary on the Monday and got reasonable scope views. It  was never near enough for decent photos, but you don't need to see any from me coz they're plastered all over the internet! This Sunday Bun and me had another shot at Pallid Harrier ( the bird we didn't see at Burpham), this time much nearer home near Cheddar in Somerset. We we're successful this time but still had to wait nigh on three hours! The bird was first spotted on the horizon by a famous Dawlish birder, not often seen 'off-patch' (nice to meet you again). However, for some reason Bun and me were the only ones to set off to look for it over the hill it had disappeared behind (only about a kilometre away, if that.) We were rewarded with superb views as it flew almost directly over our heads. I think most birders saw it later in the day at the same place, when they eventually made the effort! ;-) 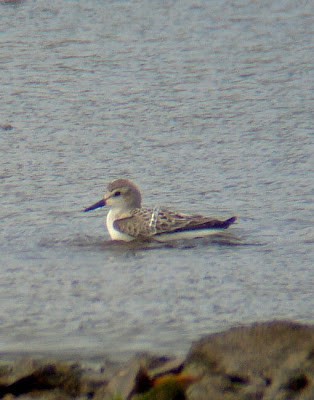 Semi-palmated Sandpiper
You've seen the rest, now see the best!
We also made a visit to see the Sabine's Gulls and Grey Phalarope at Exmouth  beach, leaving it a bit late, (6 days or so) so that when we arrived there was only one Sabine's Gull left. They were unusually flighty and after we'd been there about five minutes they were gone. I took a few lame photos of these too, actually  I kind of like the Grey Phalarope ones even though it's distant. 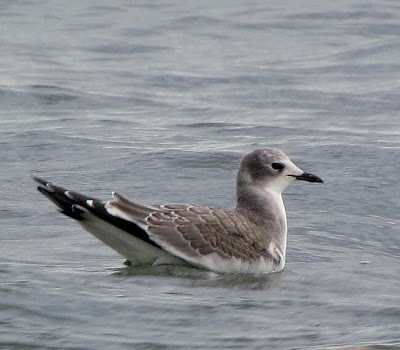 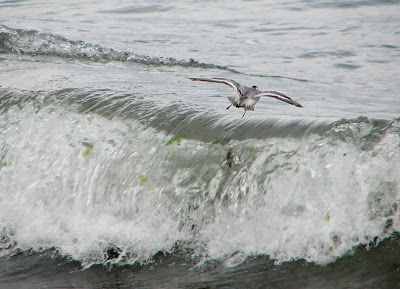 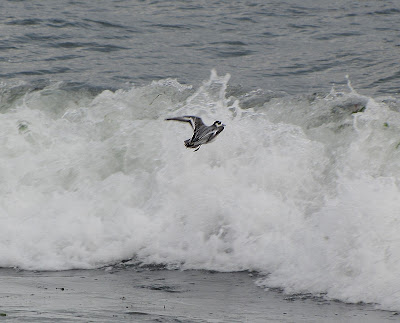 Grey Phalarope, doing what they do best.
A few photos from Black Down, Cheddar, not featuring the Pallid Harrier, which was way too quick for me. 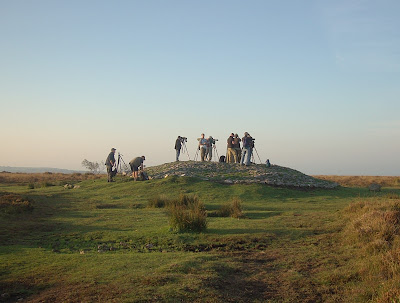 The bird had been reported showing by the trig. point, so most of the birders there stood right on it. Nothing like making yourself blend in! 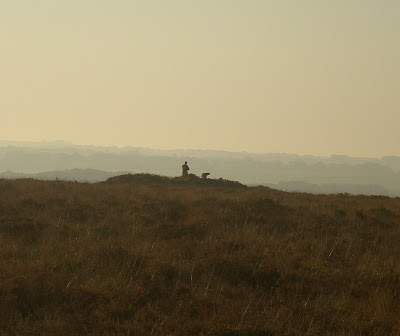 This made me smile. A photographer with netting draped over is enormous camera making it look like a small cannon from a distance. But not as much as this..... 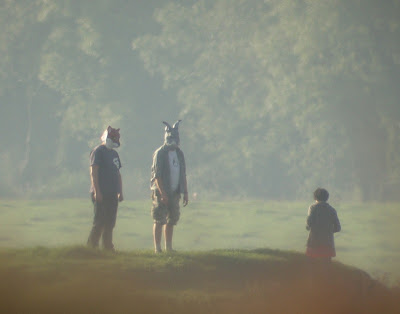 Don't ask me what this was all about!
The things you see while scanning the countryside for a raptor. Yes, it's two blokes with animal heads on being photographed by a young lady. Art project? I hope so!
If you don't like Spiders... 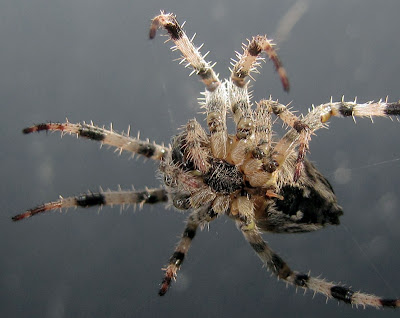 Look away now!! Whoops, too late!
We have a plague of these in the garden at the moment, seems to be a web attached to just about everything. This one's on the wheelie bin.
Cats aren't good for birds, we all know that, but they do have their uses. My cat Fidget used to kill the odd bird and I was always a bit upset by this, but he killed about ten times (probably more like a hundred times) more rodents. Unfortunately ( or fortunately if your one of those cat haters) he was run over a few months back and since then I can't really feed the birds, because if I do this happens.

This one's just a baby! They even get on the hanging feeders.
I don't know what I'll do in the winter when the birds really need to be fed.
Finally, I haven't completely lost my ability to take a decent photo, so after all those lame efforts here's one I got right. 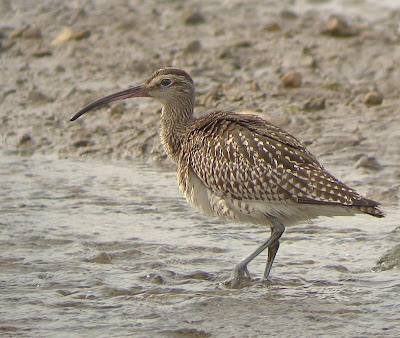 A Whimbrel
I'll endeavour to not leave it another month until my next post! :-)

PS: Anyone who read his when I first posted it will have noticed the deliberate mistake. What can I say but...whoops! You'd think with a master's degree to my name I would at the very least have the ability to count from eight to eleven sorted out.