My 'get up and go' seems to have got up and gone of late, resulting in me not doing much birding and therefore not doing any blogging either. I'm just getting a touch of the winter blues. Fed up of the cold I suppose. You may be surprised to here I haven't been anywhere near Chipping Norton, the 'dove from above' just doesn't appeal to me...perhaps I'm cured? Or perhaps it's just a symptom of my general malaise? No. I'm definitely cured...'til next time anyway!

There are some nice birds on patch at the moment but they're the same ones that have been around for weeks, therefore I decided to go over to Exeter to look for the Bittern/s that have been showing well recently at the Double Locks Wetland/Countess Weir Pools/Riverside Valley Park, or whatever it's actually called! When I arrived there were already a couple of Devon birders present, with several more arriving later. One of whom threatened to delete my blog from his favourites if I didn't update it soon, ( I aim to please Roger). There were indeed two Bitterns. We saw one in flight and while we were intently looking at the area where it landed another bird suddenly appeared from the opposite direction. It was walking along the edge of the pool right out in the open but only for about 20 seconds or so, which was just long enough for me to get my scope on it and my camera in position... shame I had it on the wrong settings ( after taking night-time shots in London last week). Doh! Not to worry though, it did stay in view just inside the reeds for several minutes as it circumnavigated the pool, so I managed to get a couple of shots of it partially obscured. It appeared out in the open again all too briefly before flying out of sight. It didn't show again before hunger and cold forced me to head for home. 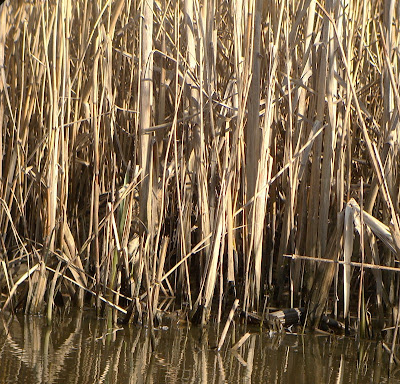 Can you see a Bittern?... Thought not. It is there though. 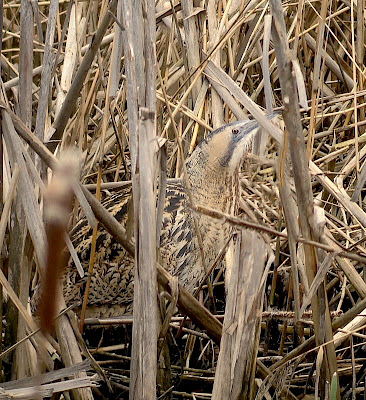 These were only my third ever views of a Bittern on the ground.
Definitely cheered me up. Glad I went. 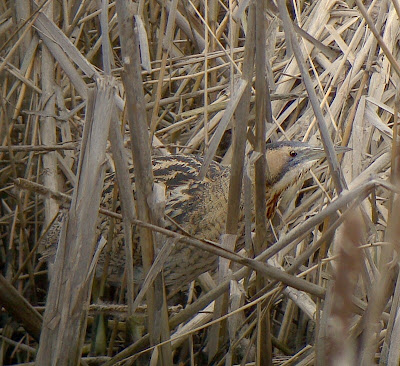 Once I'd had a spot of lunch and warmed up a bit I popped out on the patch to look at some of the local goodies. The Bewick's Swan was still near Steadcombe House, I was going to take a photo but it was standing right next to the corpse of a young Mute Swan. So not surprisingly I decided to give it a miss. I moved on to Seaton Hole to have a look at the Velvet Scoter flock, there are apparently twelve of them, but I could only see six today. They always have an attending group of young Herring Gulls, mopping up the leftovers I imagine. Even though they were too distant to digiscope I had a stab at it. I like a challenge. You can tell what they are... 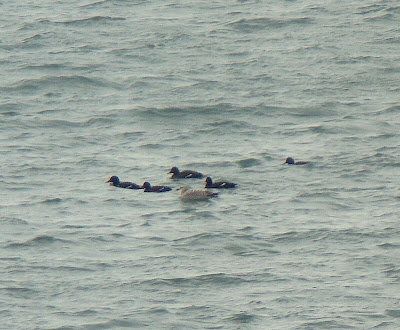 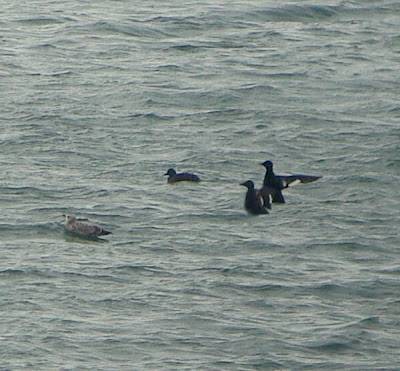 Flapping helps.
While I was at Seaton Hole it would have been discourteous to have not paid a quick visit to 'The Handsome One' . He was on his favourite rock again, he's such a show off! Sorry for more of the same but I can't see enough of him... 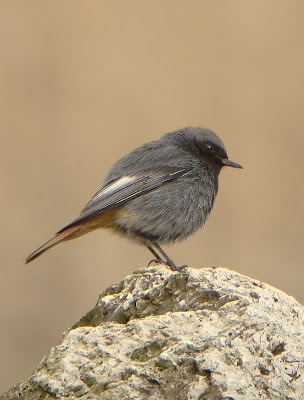 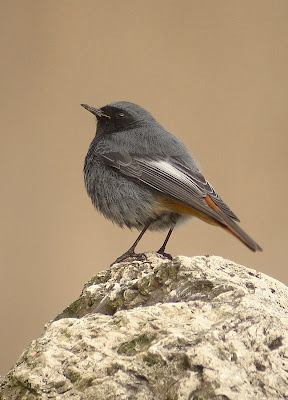 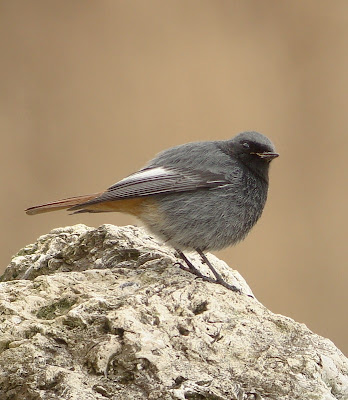 I first saw the Great Grey Shrike on Alysbeare Common on October 22nd last year, since then I've tried on numerous occasions to see it again but dipped every time. I was pleased therefore to hear that it had been 'pinned down' during Friday and Saturday last week to a small area on Harpford Common adjacent to Alysbeare Common. I had to go into Exeter today, so decided to set off early to look for the Shrike on the way. I gave myself two and a half hours to find it but saw it within five minutes of getting out of the car! Nice! I still hung around for the full two hours as I'd brought along a packed lunch and the weather was quite pleasant. Unfortunately there was no sign of any Dartford Warblers, I hope some have moved to the coast, it's not nice to think that they have all succumbed to the harsh winter. 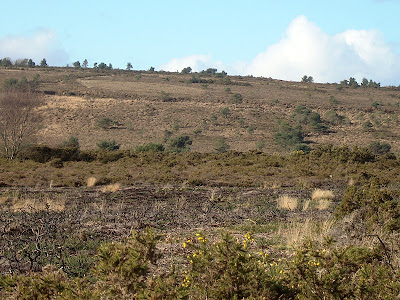 The bird was particularly fond of hunting in this burnt area, can you see it?
The bird not the burnt area! 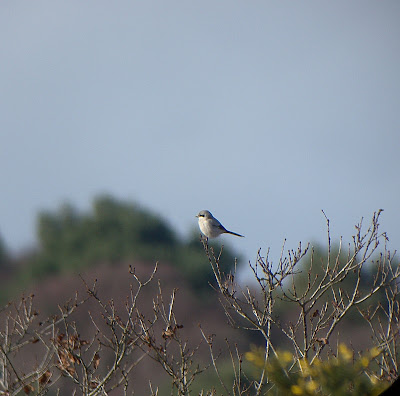 Quite distant at first....but with time ( I had plenty) and patience... 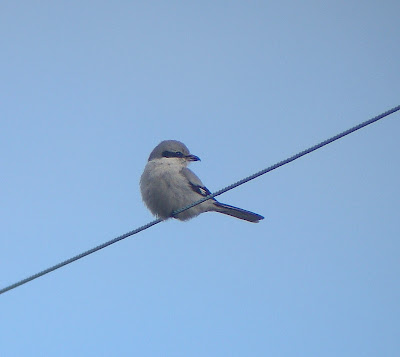 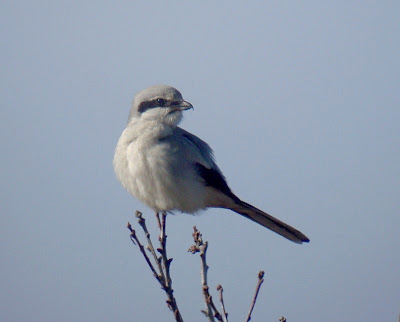 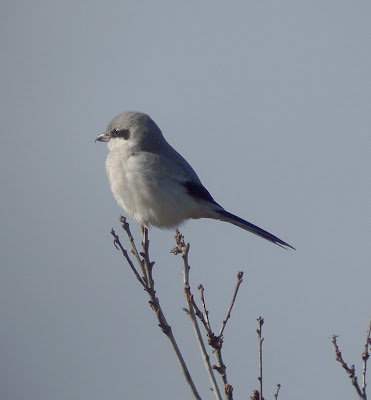 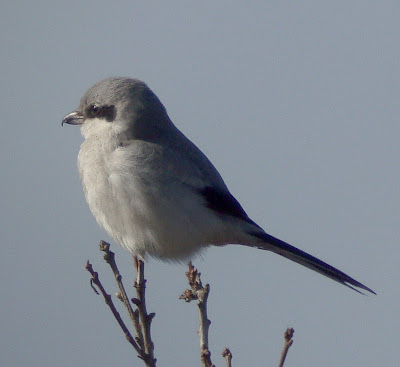 Rain stopped play today, well almost. A family trip to Sidmouth (just to get out of the house really) turned up a nice clutch of eight Purple Sandpipers, showing really well on rocks adjacent to part of the esplanade. Watching these little gems is always an uplifting experience whatever the weather, in fact rough weather shows them off to their best in my opinion. When I suggested a nice stroll along the esplanade at Sidmouth in wind and driving rain to my ( not at all gullible) family I most certainly didn't have any ulterior motive!! ;-) Light was rubbish for the super-zoom to stand much chance but one photo was a bit of a fluke! :-) 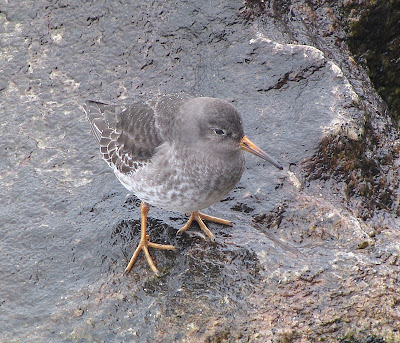 That's a new word I've learned this weekend ( well a new use of a word I should say). Our computer was 'bricked'. For anyone as out of touch as me that means that it was rendered totally useless... as useful as a brick. It had all started so well too. The computer being an impressive five years old was getting a bit (well a lot) slow, the fan was constantly whirring away and a couple of crashes a day weren't out of the ordinary. It was therefore time for action. We decided to give it a good clean and also to format it and reinstall the operating system. All was going well until we realised we'd lost most of the drivers in the formatting and whilst trying to get the various hardware working again my son George managed to switch off the display adaptors, we couldn't even get the DOS prompt on the screen. "It's bricked" he declared!

After 48 hours with no computer, moderate to severe withdrawal symptoms were beginning to develop ( I nearly did some housework) well in me anyway, the kids have their own computers which I'm banned from touching. Charming! (especially as I'm always having to turf Martha off mine). We were about to give in and order a shiny new one when we thought of a cunning plan. We disconnected then re-connected the internal power supply hopefully making the computer 'lose its memory' and 'think' it was new and being powered up for the first time. It worked, and it did indeed forget it was 'bricked'. Another 24 hours later and its back up and running, though I'm not sure for how long because all that dirt and fluff around the fan wasn't so much hindering its performance as soundproofing it! It now sounds like a hovercraft!! 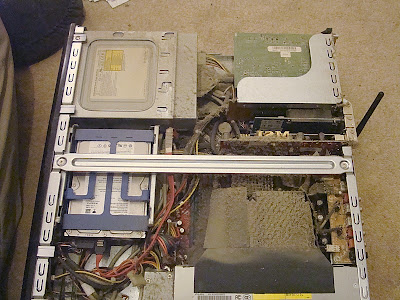 Five years worth of dust. That furry thing in the bottom right is the fan housing! Yuk! 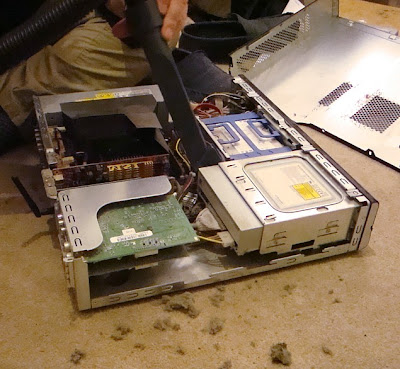 Nothing a vacuum cleaner an air duster and a team of software experts can't fix though.
So to birding, which I wouldn't be able to share with you without the co-operation of the above chuck of old metal and wires. On Sunday me and Bun popped over the border into Dorset to twitch the Great Bustards which are wintering on fields near The Fleet. Yes, I know we can't tick them! We can count them though. There were two! ( Sorry!) I know they are introduced birds but its still nice to see a new bird 'in the wild' so to speak. They certainly didn't disappoint, what magnificent beasts they are! When we arrived at Moonfleet Manor Hotel I was just turning the car around when Bun spotted them silhouetted on the brow of a hill in an adjacent field. I parked the car and just when we were walking over to a good spot to view them from a Buzzard flushed them. We had a brief flight view of one of them as they dropped out of view over the ridge. "No problem", we thought. They'll be just on the other side. They weren't, we couldn't see them anywhere. It's amazing how easily such enormous birds can just seem to vanish. We caught up with them eventually several fields away. Bun spotted them when he noticed some Red-legged Partridges, put his bins up for a closer look and  the Bustards were there too. They were right on the edge of the field on a small bank but were superbly camouflaged, you just couldn't pick them out with the naked eye, even though you could see the Red-legged Partridges easily enough. They were both sporting lovely pink wing-tags ( numbers 1 and 15) and apparently they have radio transmitters too. We weren't close enough to see the aerials on them though. They were extremely wary and knew we were watching them, so even though they were pretty distant they stood still long enough for me to digiscope them reasonably successfully. 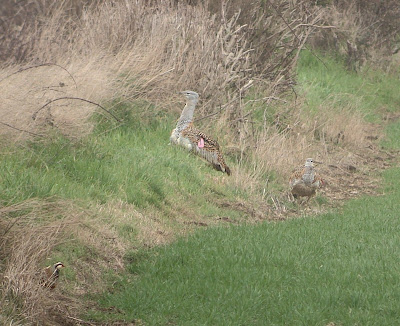 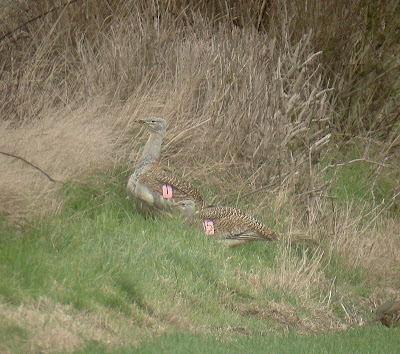 There were also a couple of nice flocks of Brent Geese on The Fleet and in the neighbouring field, two of them stood out from the crowd, having some characteristics of Black Brant  namely dark backs and very white flank patches. They didn't however have the broad neck band one would expect. Hybrids? 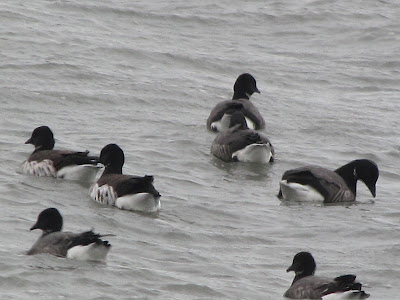 That's them swimming away to the left. See what I mean?
We were back on patch by lunchtime and so I had time in the afternoon to take Rex for a walk along the River Coly. I was hoping to see a Dipper, or some Siskins or Redpolls but I saw nothing but lots of other dog-walkers. Sunday's not the day for birding on the Coly. In a recently cut back hedgerow I spotted this exquisite little nest. 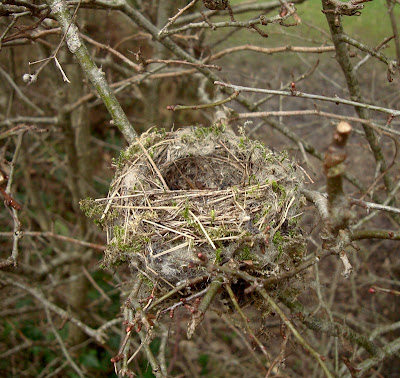 Doesn't it look cosy?
I really do marvel at the work which goes into nests like this, I'd guess this one's the work of a Dunnock. On the way home I spent a while looking at the estuary and took a couple of photos including this one of a  Black-tailed Godwit yawning (well it looks like it is). 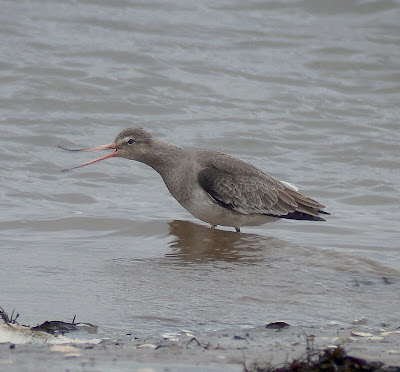 Finally, yesterday I saw the gorgeous male Black Redstart at Seaton Hole again. He kindly posed for a few photos. Must be in a good mood as due to the warmer weather, he was certainly doing very well for flies, they were everywhere! 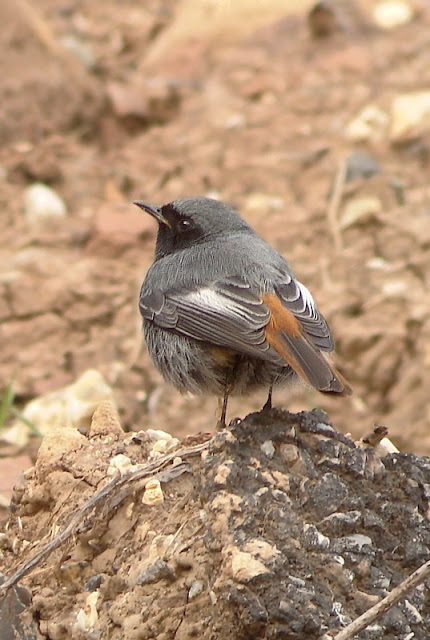 This could have been the best photo I've ever got of a Black Redstart..
If I hadn't taken this... 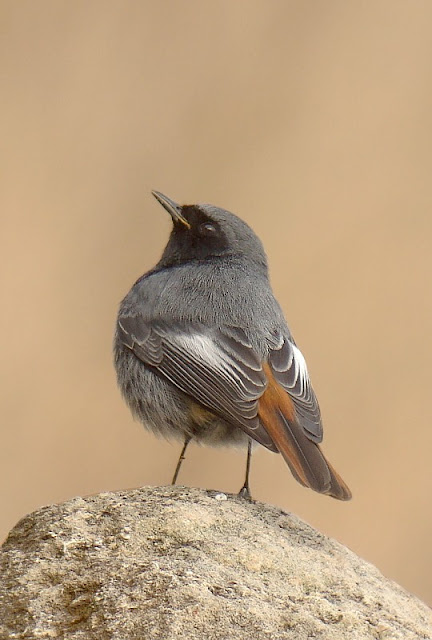 I think a plain background makes a big difference, needless to say I'm very pleased with this! :-)
Posted by Karen Woolley at 9:15 pm 2 comments: