I've had little time today for any birding but I did manage to see a couple of notable birds non the less. Latish on in the afternoon I took Rex for a walk along the beach where I spotted another Little Gull feeding VERY close in, along the line of the breakers in fact. I had my trusty point and shoot with me so tried to get a few photos. The bird was usually too close, making it too fast to follow with the camera but I managed a couple of OK shots. I could see some very dark and menacing clouds out on the horizon and sure enough it soon began to sleet quite heavily. I decided to drive up to Coronation Corner, wait for it to stop and see what, if anything, it brings in. When I got there it was quite busy, Steve was looking through the gulls, along with two visiting birders (I think), well I didn't recognise them through the downpour. Ian M was also there sheltering in his car. The sleet turned into heavy snow and they all eventually left. It wasn't looking like stopping any time soon so I left as well, after all I could hear a nice cup of tea calling! However, I was just passing the gates to the yacht club when the snow did indeed abate a little, I was tempted to go back to the beach to see if the Little Gull was still there, because I'd enjoyed watching it so much. Just as I reached the car park and wound down the window I noticed a flock of ducks flying east, very close in, they almost flew over the car park before heading back out to sea. They looked interesting (i.e. not Mallard or Wigeon) so I quickly got my bins on them and they were interesting too, a patch yeartick no less! Pintails! FIFTEEN of them (including at least four drakes). Quite exciting really because I've only ever seen singles on patch before.They'd obviously been blown off their usual 'avoid Seaton Bay like the plague' flightpath by the approaching storm I had passed Steve by the bridge on my way home and knew he needed Pintail for his yearlist, he was near enough to see them I thought and I was just trying to phone him when the snow suddenly turned into a blizzard. The ducks simply vanished into the resulting whiteout!! I texted him instead. He never replied, so I guess he may have been a bit gripped, Ooops sorry :(

Here are some photos: 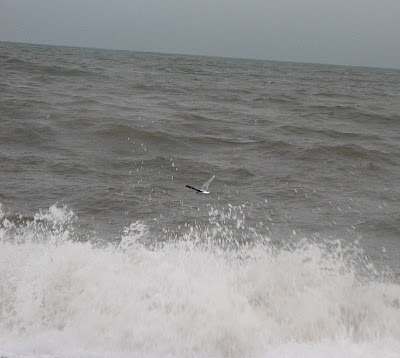 It was right in over the breakers.... 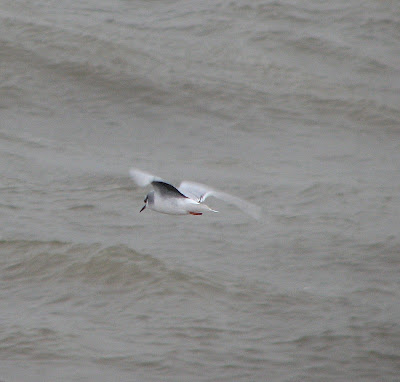 ... Flying to quickly for my camera to cope. 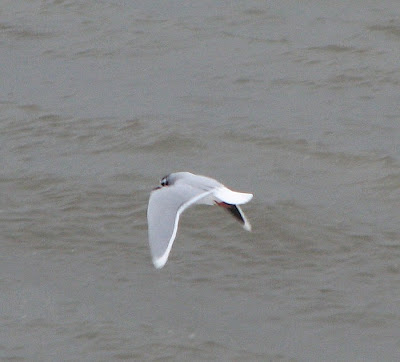 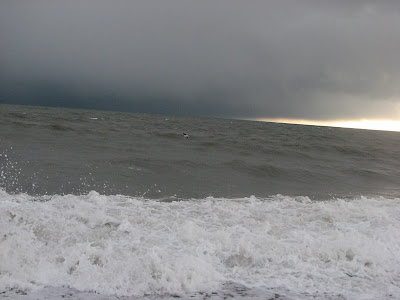 A very threatening sky, it was, as my old Nan used to say "as black as Bewdley Hole." Whatever that was!! The Little Gull is just visible right in the centre. Honest! 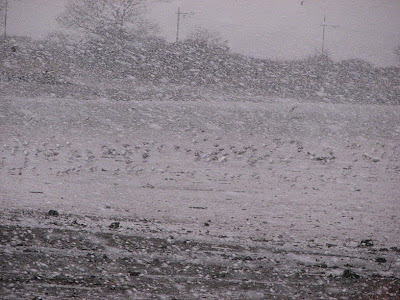 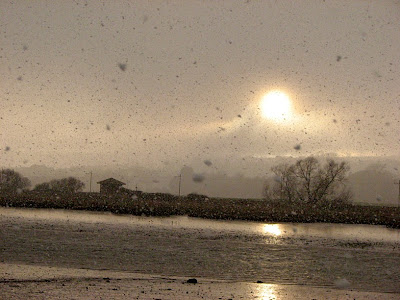 The snow was so thick it obscured the sun partially, making for an atmospheric scene. Can you believe ten minutes later the sky was blue again!

PS: In case your wondering, guinea pig alive and well, update to follow shortly.
Posted by Karen Woolley at 8:09 pm

Just a teeny gripped Karen, the sea gave me S** ALL in the morning. But not too gripped, well done on what could well be a patch record for Pintail! One will fly my way soon enough.