Well, actually Iceland Gulls, but the ones on the River Axe do appear to be giving the chameleon a run for it's money in the colour changing stakes! I'm getting really confused trying to work out which individual I'm looking at at any one time. I've seen several over the last three days including ( as you know) three together on Sunday afternoon. So I'm certain there are at least three! I got a photo on Sunday with two individuals in it, though one is pretty blurry. They are one of the 'pale ones' and the 'dark one'. 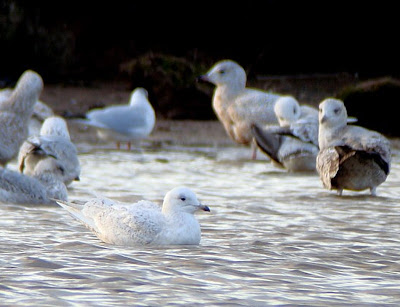 Today at around 3.30 pm I spotted what I thought was one of the pale ones just south of the creek outside Seaton Hide, it looked really white like the one in the above photo. After a while it walked southwards towards the tram sheds, I followed in my car to get a clearer view and when I got there it had changed colour!! It now looked much darker especially on the underside, it was definitely the same bird though, they obviously look very different depending on the light conditions, background, angle of view etc. Here it is looking not quite so pale. 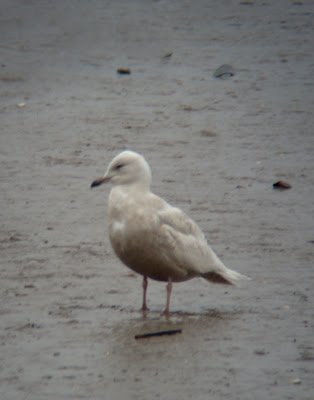 One of the 'pale ones'

I wish I'd taken a snap of it when it looked paler to show the difference. However, I do have two photos of the bird from my last post (Friday) showing the same phenomenon. 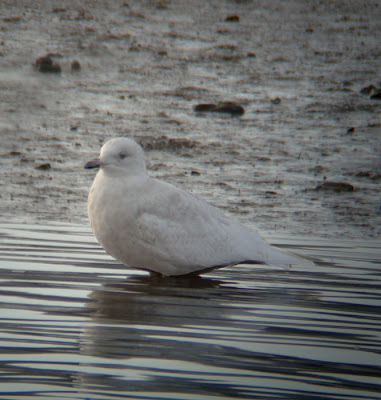 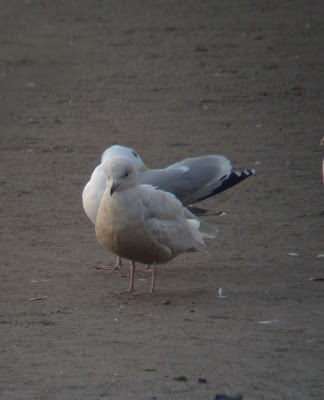 These two are the same bird.

It shows you can't rely on first impressions of shade alone, so need to at least look at the plumage in some detail to recognise different individuals, although that said the plumage could change subtly over time too I suppose. Quite a thankless task really. 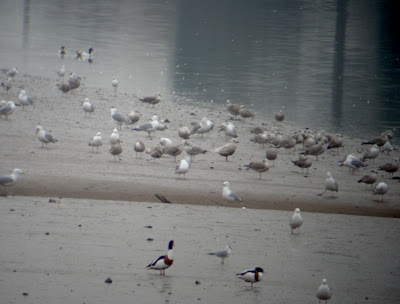 Here's a nice distant shot of today's pale/ dark/intermediate one taken from my bedroom window. It'll be a sad day when this view is eventually replaced by a huge block of flats! 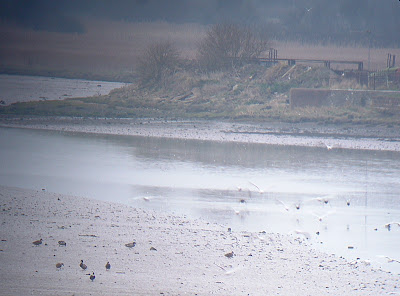 Here's a view of Coronation Corner after most of the gulls have flown off to the roost. To the top right you may just be able to see parts of a birder hiding behind the wall. "I know who it is, but I'll let you name him for yourselves" ;-)

Also today, I walked to Jubilee Gardens via the cliff path and I had a typically brief glimpse of a Firecrest skulking in a holm oak. I also took a photo of a seabird that ISN'T an Iceland Gull! :-)

A Fulmar
Posted by Karen Woolley at 10:37 pm