I only had time for a quick half-hour look at the estuary before work today, long enough to see an Iceland Gull though obviously! I also saw three adult Med Gulls without even trying, so there were probably a few more than that.

The question is "which Iceland Gull did I see today?" I took a few snaps and think I can 'Name That Gull' in two! Doesn't mean I'll be correct though!

I've chosen these two photos because of their 'uniqueness'. Yes, that old hackneyed excuse again! 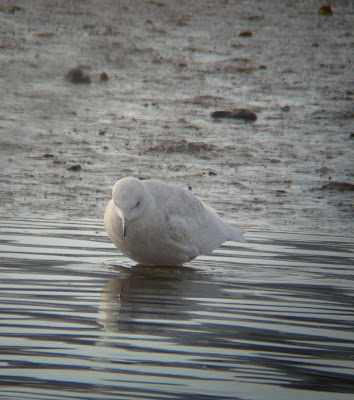 Here's a good one of the top of it's head. 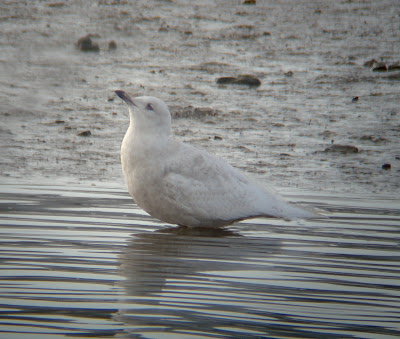 This never to be repeated shot is of an Iceland Gull gazing up at the Devon Air Ambulance!

This morning Steve saw the two Iceland Gulls that I'd seen on Tuesday and I suppose this could be the lighter one of those two, but I'm inclined to think it's the other pale one, the cuter one. Although Steve pointed out in his blog that they can look very different depending on stance, I think the plumage on this bird isn't as well marked as on the the one on Steve's blog, especially on the back where the markings are very faint and worn looking. I could be wrong though. I scoped this one from the house later, it would be a shame not to take advantage of the Iceland inundation, by getting it on the house list, wouldn't it? I also belatedly added Mediterranean Gull too.
Posted by Karen Woolley at 9:48 pm

Thanks for following my blog. Ypu are now linked..

It's nice to see another female bird spotter, everyone in the North East seem to be of the male variety.
nice photo's
Michelle
Birding about Norhumberland

Thanks for the link Martyn :)

Michelle - Thanks for kind comment,female birders pretty thin on the grounds in these parts too, a national scarcity too I shouldn't wonder! :-)