Another Yeartick For The Patch

I spent most of this morning birding with Steve, we started in Branscombe but I don't remember exactly what we saw, which means it wasn't anything very exciting. The sea was lumpy and the light rubbish too. I was pretty gripped to get a text from Ian M much later in the morning saying he'd seen a Slavonian Grebe there. It looks like late morning's the time to go there at the moment. After Branscombe we went to the 'Woodcock Woods' near Colyton so Steve could do his monthly bird survey. There were no Siskins or Redpolls today and only one or two Woodcock, which was a shame because I was hoping to get a photo. The two birds we did see flew out of the woods and straight in again foiling my attempt to get a flight shot over a field. Nevertheless I pointed the camera in the vague direction of one of them and... Hey Presto! 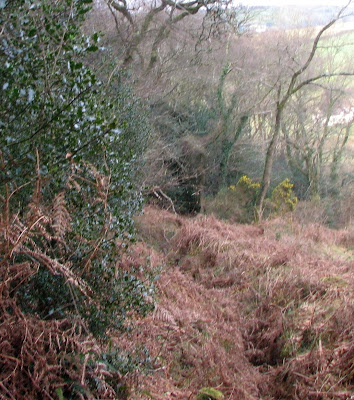 There IS a Woodcock in this picture and in true Woodcock fashion it is virtually invisible, not due to camouflage though, just naffness! If anyone can see it I'll award them a quality prize. Go on look for it, you know you want to!

Most of the birds we recorded were heard only, and included all the usual suspects, including Treecreeper. Why mention that specifically? Well, when Steve heard it calling he said "Treecreeper! Can you still hear Treecreepers Karen, they're the first one to go" Charming! I'll say this for Steve, he sure knows how to humour a woman of a 'certain age'! ;-)

At lunchtime I was feeling too lazy to take the dog for a long walk so took him to the beach instead. I'm glad I did because two blobs fishing off the river mouth turned out to be something more interesting than Cormorants for a change. They were a pair of Red-breasted Mergansers, not a rare bird obviously but scarce on patch, these being the first this year. I sent out a text or two saying they were close in, but almost as soon as I did so they began to drift further and further out. They were still around an hour later though apparently. Here's a few snaps I took. I like the third one, the female's in mid-dive. 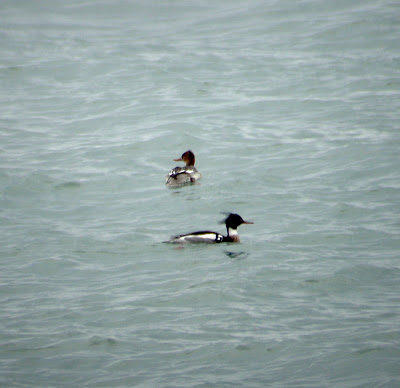 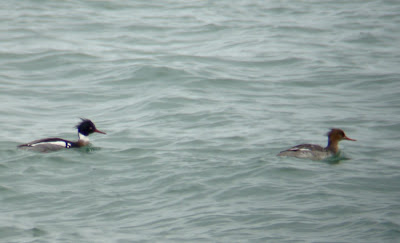 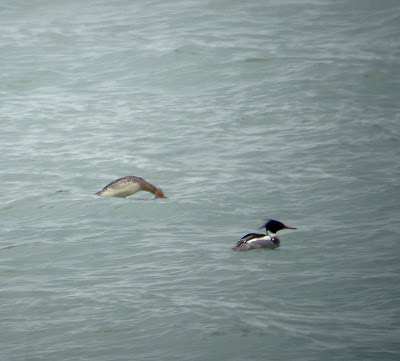 I had a quick look at the estuary before work and saw.... ...Well I never - the 'dark one'
That's enough from me, it's half-ten and time for my Horlicks and Sanatogen.