A couple of weeks ago Nick had kindly asked me if I'd like to visit the Cotswold Water Park during half term week to look for Smew, so this morning that's exactly what we did. Bun also came along, he'd seen Smew there last year but was keen to repeat the experience. There has also been a Great Grey Shrike showing well near to the town of Cirencester, so naturally we had to go for that too, especially as Nick has dipped so many in Hampshire.
Here's how our day panned out:

First stop was the Great Grey Shrike location near Cirencester, and very scenic it was too, not exactly the sort of setting one would expect to be looking at a Great Grey Shrike in, it was a field of rank vegetation alongside a lay- by, on a dual carriageway, under some pylons, opposite a massive Tesco superstore! Gorgeous. 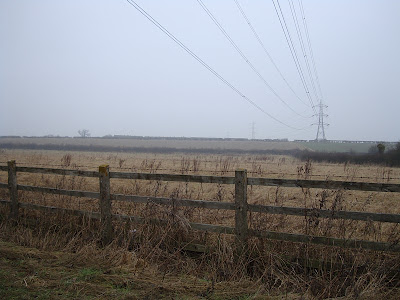 It was raining and the rain was fizzing as it hit the overhead powerlines.. 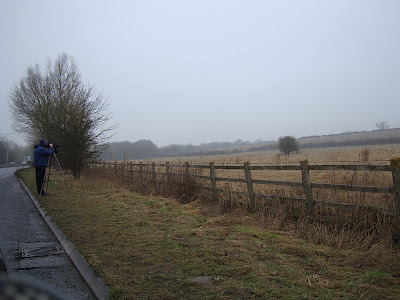 Bun patiently keeps his scope fixed on the one tree in the field... 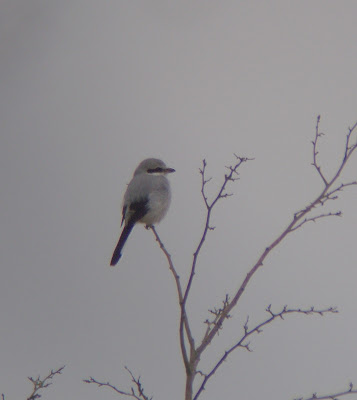 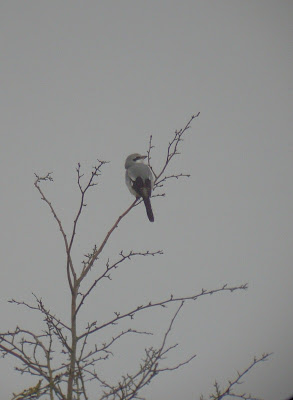 It sat in the tree for a good while, giving superb views. Unfortunately the rain and murk made photos a bit ropey, as you can see, but so what! It was a bostin' bird and a lifer for Nick and myself! 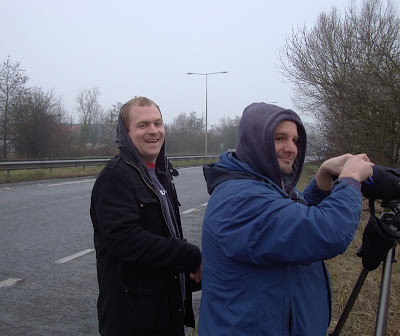 After this successful twitch we made our way to the 'several million' lakes which make up the Cotswold Water Park. When we arrived it was quite foggy and so chances of spotting distant ducks were small. 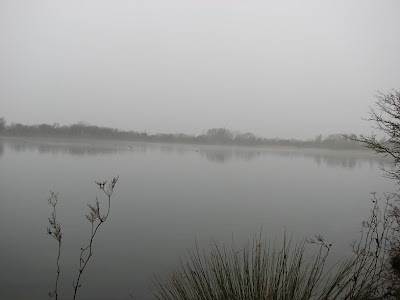 Lake 43, after the fog had started to clear!

Despite the poor visibility we soon spotted some of the hundreds of Red-crested Pochards, Nick's and my first 'wild' ones. There were also plenty of Goosanders, Goldeneye, Wigeon, Pochard and Tufted Ducks, millions of them! Right at the back of lake 43 in the murk Nick spotted the ducks we'd come to see, Smew! We expected them to be too wary for us to get any closer, but fortunately they had their minds too firmly fixed on each other to notice us. We had really nice views and they were very entertaining . There were nine redheads and three simply stunning drakes! It was still a bit misty for photos to do them justice but we had a stab at some. I say we because Bun had his new camera and was somewhat pleased to have got a recognisable result! 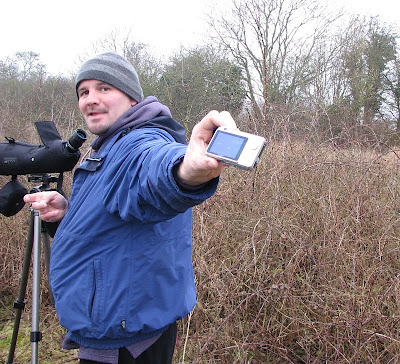 "Look. Look I've got a photo of some Smew!"
(If you look closely you can see them on his camera's screen)
Bun isn't as portly as this photo suggests; that's an enormous flask of coffee subtly hidden inside his jacket!

Here are a couple of my better efforts, great birds and every bit as stunning as I imagined they'd be :-) 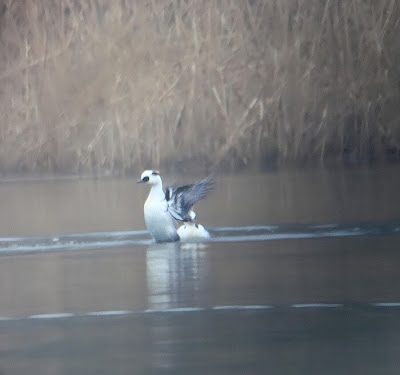 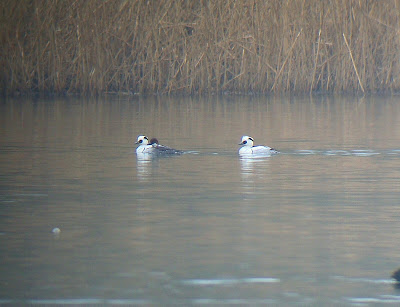 As we were leaving a few started to fly around a bit and I got a 'nice' flight shot! 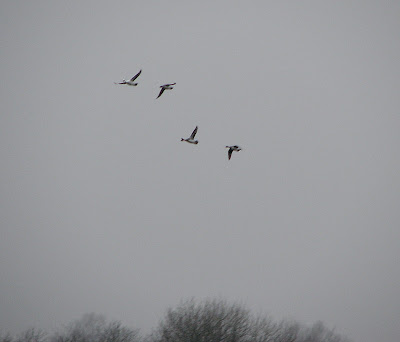 Now I know what to look out for flying past Seaton. It could happen!
Also a short video clip:

When we arrived back in Seaton we saw Steve at Coronation Corner, he'd seen two Iceland Gulls, the darker one from yesterday and the smaller pale one. We enjoyed good views of the former, rounding off an excellent day, nicely. :-)