Left at the Start

Well it's 2009 I see. May I take this opportunity to (rather belatedly) wish my reader/s a very Happy New Year. I'm afraid I've slept through most of the last week and haven't gotten out into the field until today. In fact I tell a lie coz all I did today was have a quick gander at the Golden Plovers on Bridge Marsh from the confines of the car! There were LOADS of them and to think I risked life and limb last month trying to get a close look at some on patch. I've also seen a Black Redstart this year already, only because there's still one on next doors roof periodically. I've been struggling into work but because this is tantamount to standing in a fridge for several hours it hasn't been doing my health a lot of good. I'm certainly hoping to be back in action soon...I can't keep feeling ill for much longer, surely!?

I feel the need to say a few words about 2008, but won't be saying much (honest) because most of the year's highlights have already been mentioned on Gav's and Steve's blogs. The main highlights for me were the Woodlarks last January (22 of them in one field), my first ever Hen Harrier (a male) hunting over Colyford Marsh. The FIRST couple of Cattle Egrets, the Sabine's Gull circling just feet over my head, the Grey Phalarope, the two Avocets (in off). My first Long-tailed Skua -In fact ALL the seawatching, and of course our long staying juvenile Osprey. That's all I can think of off the top of my head but there's probably loads more. Oh yes, I know 100 Wheatears one morning on Beer Head was awesome! 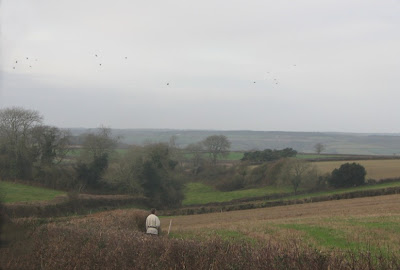 One of the year's highlights- 'Woodlark Wonderland' An awestruck Steve watches 14 of the 22 Woodlarks.

Another couple of notable sightings for me were of two species usually only seen on our patch as passage migrants, namely Redstart and Grasshopper Warbler. I found at least two males of the former singing and appearing to be holding territories at Blackbury Castle. Also a single male Grasshopper Warbler reeling on and off for a couple of weeks at Trinity Hill. 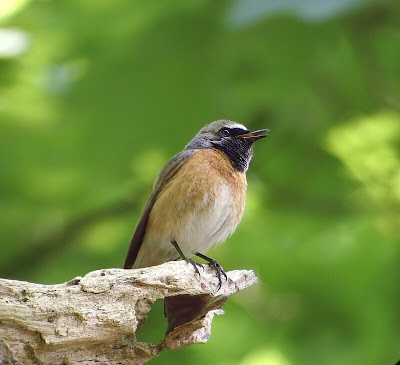 Redstart at Blackbury Camp, probably a new breeding bird on patch, unfortunately no confirmation of breeding was evident, hopefully they'll return this year. 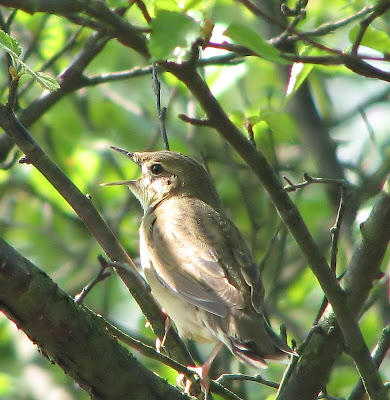 A reeling Gropper, one of my favourite photos of 2008. I'd never had a good view of a Gropper before, so was thrilled to get this image.

My most favourite-ist photo of 2008 is already adorning my Blog, see bottom of page :-)

What about last years patch yearlist competition? Well it certainly caused a good few mood swings! On the whole however I thoroughly enjoyed it, and eventually amassed a gargantuan total. I see from Gav's latest Blog entry that the coveted prize of a half-empty bottle of disgusting red wine has mysteriously changed to 25 second hand golf balls! Please don't think me ungrateful, but I will NOT be revealing my patchlist total anytime soon for fear of winning them!

Posted by Karen Woolley at 9:34 pm

Nice post Karen - I'd forgotten about that super Redstart pic. The half empty bottle of disgusting red wine can easily be reproduced at will, and I am very happy to do so in exchange for the Woolley year list!

Thanks Gav, no need to worry about having to reproduce the half empty bottle of disgusting red on my account. I was bluffing. My total's not that big, in fact I'm pretty sure it's going to be much smaller than Ian M's.