Our 'First' Cattle Egrets of the Year

I was in Axmouth just after 7:00 this morning along with Gav, Steve and Bun to see how many Cattle Egrets were in fact in the roost, if you've read Steve's blog already, you'll know there were THREE, you'll also know that they returned to the field in Colyton where Steve found one of them yesterday. There was thick river mist in the Coly Vally this morning and as soon as it had just about cleared I went looking for them. I pulled in by a driveway and could immediately see all three. Two together and one in another field on it's own. Obviously I was itching to digiscope them, I don't know why. I set up my scope and when I got my camera out the batteries were flat (probably something to do with Norfolk), desperate for a photo of some sort I tried my S3, I got one shot and it said " change the batteries" Pants!! Here's that one photo, It's rubbish but I'm putting it on because it's a nice addition to my 'White Blob Portfolio' 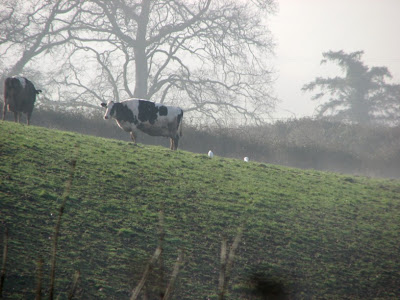 I've already wowed you with 'Big White Snowy Blob' and 'Great White Blob' I called this one 'Cattle Blobs'
It just wasn't good enough though, I just had to digiscope them. I popped home for another camera and when I returned Ian Waite had just seen them fly into the next field along, which fortunately was visible from another vantage point. So my digiscoping dreams were to come true after all. Yeah right!, It doesn't matter how many Egrets you photograph it doesn't get any easier, it sends the exposure on the camera potty so that most turn out as glary white messes. Today I somehow managed to get a couple of reasonable shots. I know Steve has posted LOADS of excellent snaps but that wont stop me putting mine on, the reason being that they are the ONLY ones I'll take this year. If we have any more Cattle Egrets (which I think is a pretty safe bet) I will NOT be taking pictures of them, I wont! No really I WONT! 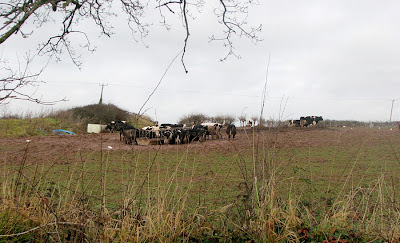 Egret magnets. Cows and mud an irresistible combination, oh, and a few more white blobs, in this picture you can (or can't) see 'Little Blobs' 'Cattle Blobs, and a couple of 'Black-headed Blobs' 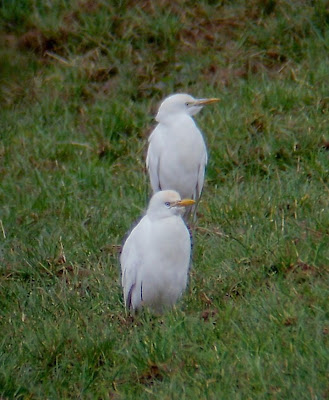 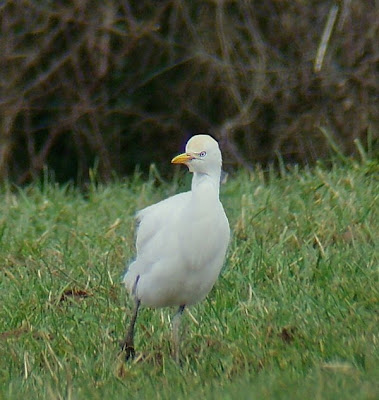 Cattle Egrets, much more characterful than Little Egrets for some reason.

I also took a small video, it starts off brilliantly with some superb pooing (blink and you'll miss it) before getting very predictable. The interesting thing about it though is that you can see how the camera is struggling with the automatic exposure setting, it just can't make it's mind up.

On the way home I was held up for a while on Cownhayne Lane, by this: 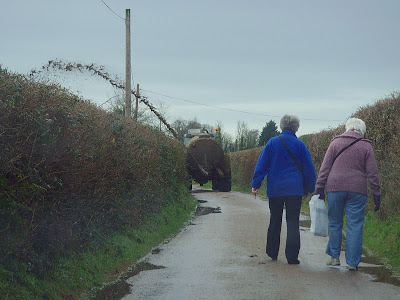 A novel approach to muck spreading. Bye heck, it didn't half hum! These two unfortunate ladies were probably not enjoying their amble down a country lane as much as they'd hoped. When the slurry ran out, the blower kept going temporally, so spraying the air with a fine 'cow poo fog' which left a film on my windscreen, I'm very glad I wasn't walking! Very!
Yesterday I walked to Jubilee Gardens I didn't see any birds of note but on the way back I stopped to take a snap of this pretty view. 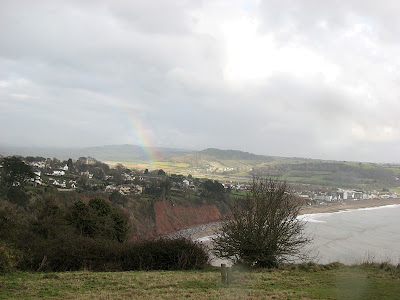 The rainbow ends at the 'Enchanted Farm Gate' from where certain people can spot Cattle Egrets that are two miles away!!

For anyone who's read Gav's blog post " Once upon a time in a second-hand car dealership" and agrees with him that his sensible Volvo 240 Estate is a little on the Grandad-y side then take a look at what the Woolleys used to sneak around in! In the grandad-y stakes it leaves the Volvo on the start line I think: 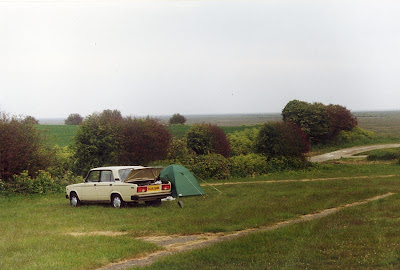 Cool or what!? Lada Riva Saloon, the car that looks like it was drawn by a 5 year old! Beige and grandad-y in the extreme. What can I say it was CHEAP!! This photo was taken at Stiffkey in North Norfolk, September 1989 I think, for some reason we had the campsite to ourselves!

The best thing about owning a Lada in the early 1990's was that they became very popular in the Baltic countries after the break up of the Soviet Union. When we came to sell it, the moment the advert hit the press we had three groups of gentlemen from Lithuania having a 'heated discussion' on the pavement outside our house, this involved posturing, spitting (ugh!) and plenty of what we took to be Lithuanian profanities! After a while one man stepped up and said "We will buy the car, this man has the money" The man in question dipped his hand into a Tesco's carrier full of used notes! Easiest car sale ever!

I myself never got the privilege of driving the Lada because I didn't take my test until the mid-nineties. Once on the road I could choose my own 'wheels' and here they are: 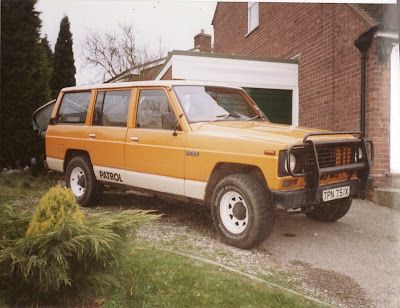 What a car! What a colour! Even I couldn't lose this in the car park - surely the 'best car ever!'
Posted by Karen Woolley at 8:18 pm