First thing yesterday morning I managed to get Spoonbill on my house list, (this would have been easy to do on Sunday afternoon when it was standing around in the river for hours but I never thought to look at it from the house at the time) I could see a large white blob alone on a saltmarsh island just opposite Coronation Corner. I couldn't tick it because it could have been a Swan or a group of Little Egrets or indeed a fertilizer sack (it was about a kilometre away). Fortunately, as I was struggling to decide which of these it was, it took off with about a dozen teal (well, tiny ducks) and circled around for a bit. I could see that it had landed along with some large gulls to the north of Seaton Marshes somewhere, that somewhere was Black Hole Marsh I learned from Gav's text later in the morning. I believe it was back on the river in the afternoon but I didn't see it because I was on a luxury cruise on the River Exe. Actually it was a bird watching trip and I'd kindly been invited along by Ian Waite, who was doing the expert commentary, and a fine job he did too. I certainly couldn't keep talking for that long!

The trip lasted for three hours and went from Exmouth Docks to Topsham and back, we didn't see anything particularly rare but had some greet views of large numbers of waders and waterfowl, some of which are quite scarce back here on the River Axe, like Grey Plover, Bar-tailed Godwit, Knot, Avocet, Sanderling, Brent Goose and Red-breasted Merganser. The weather conditions were at best atrocious, with high winds and persistent rain but I thoroughly enjoyed it especially with the help of some superb chicken and leek soup, hot sweet coffee and the regulation chocolate buttons (the weather conditions called for the giant variety). I was hoping to get some nice photos but it wasn't going to be easy in the wind and rain, I've never had to wipe my bins and camera lenses so often- ever! Most birds were moving too as was the boat obviously, so maximum naffness guaranteed!!

Here's a summery of the trip in photos, some much worse than others. 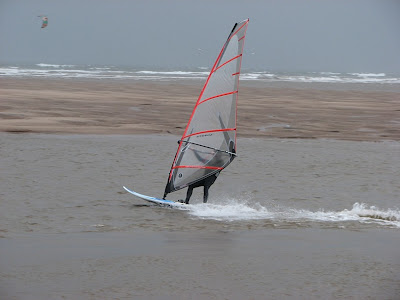 Some people were really enjoying the first strong winds for weeks.This looks easy, doesn't it? 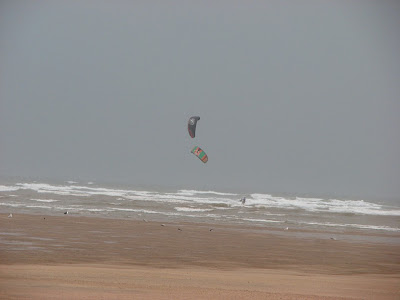 ....not as easy as kite surfing though. One of these guys came right alongside the boat at an incredible speed... 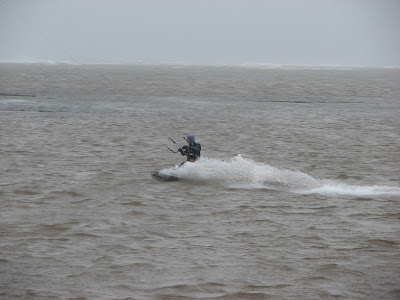 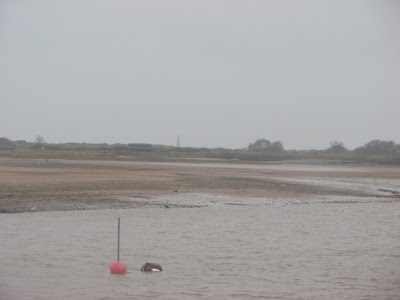 Here's a murky photo showing the Dawlish Warren reserve, you can just see the two tier hide in the distance to the left of that pole/mast thingy.

And now some stunning bird photos: 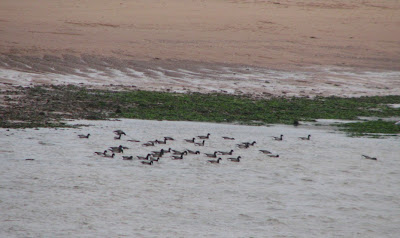 Ooh Brents! How exciting! There were hundreds of these.... 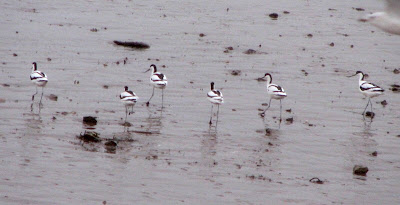 ... and these, in fact Avocet was what the majority of the punters on the boat had come especially to see, so they went away happy despite the weather. 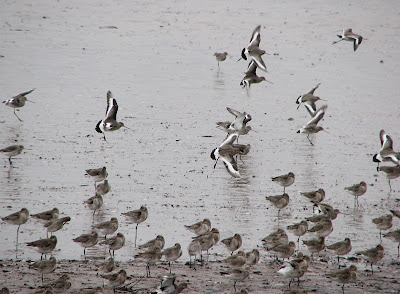 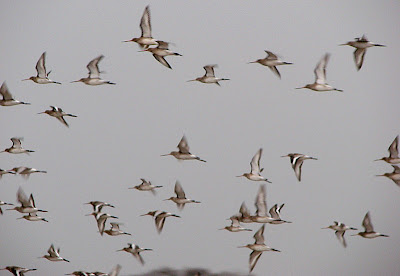 There were a few Blackwits...as my stunning flight shots show.
My personal highlight was getting nice close views of Red-breasted Mergansers, my closest for seventeen years! They are always pretty distant off Seaton and usually just fly pasts.

We often got a lot closer than this .... 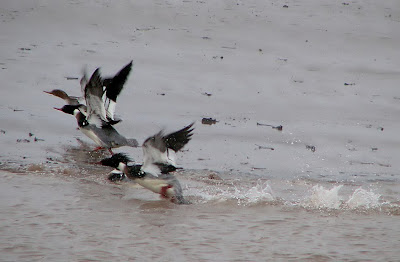 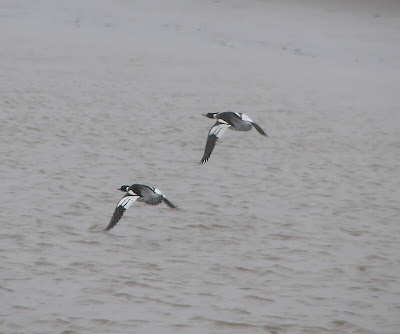 ... but the result was always this. Great close flight views though!

Finally a couple of pics of the boat, the first one taken on the way out showing Ian in the centre with bins up and the hardiest of the passengers facing the elements on the top deck. Would they last the distance though? 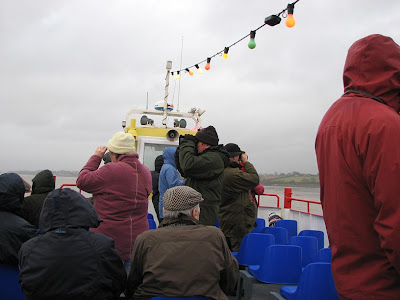 Still keen despite the weather. 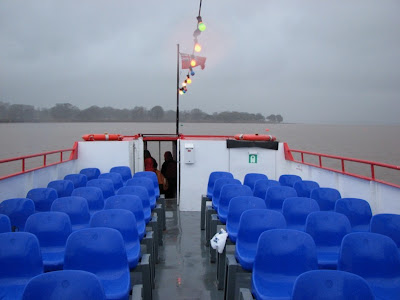 But not that keen! The same top deck with half an hour of the return trip left, The rain was now lashing down and only Ian and 'Seaton's hardest seawatcher' remained.

Posted by Karen Woolley at 1:31 pm