I went out birding late morning hoping to see some scarce or indeed rare ducks. First stop was Lower Brucklands again where the only ducks on the limited area of water were the usual Mallards. The Tufties still haven't returned. I was just getting out of the car at my second stop (Seaton Marshes) when I got Bun's text, he'd spotted a Surf Scoter off Beer Beach. I rushed over there for a look naturally, Gav joined us later too. The duck was quite distant but eventually it took off and flew a bit closer to the shore giving some excellent views, which showed it to be a young male. It had a prominent white nape and quite a lot of yellow in the bill. It was always a bit too distant for digiscoping, aren't they always! That didn't stop Gav and me having a crack at it though. I got some variously coloured blurry pixels in very vague duck shapes like so: 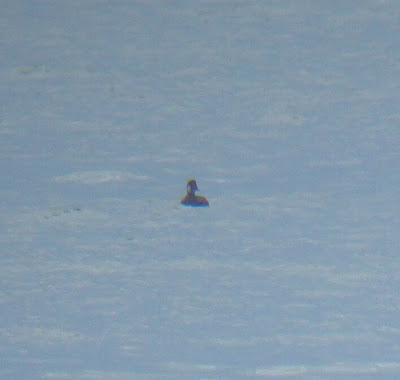 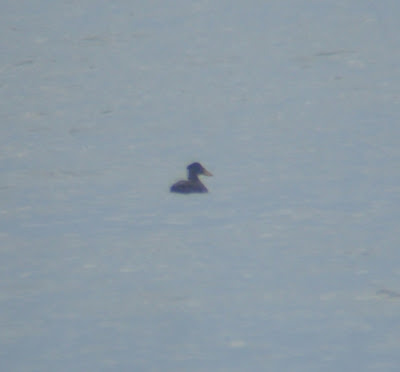 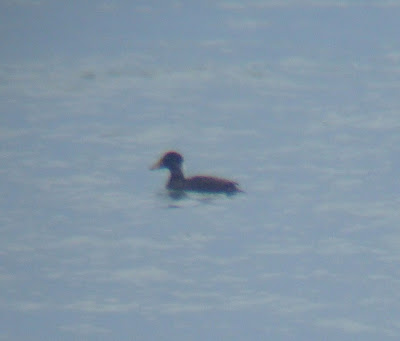 A brilliant bonus for me came when Gav spotted a Harbour Porpoise which I eventually got onto too. Believe it or not, my FIRST EVER live, wild cetacean!! I've led a sheltered, land bound kind of life. Shows I don't go out on our boat very often! So thanks for that Gav and a big thanks and 'well done' to Bun. Also on Beer Beach a female type Black Redstart put in a brief appearance.
Posted by Karen Woolley at 7:35 pm

Can't believe the superlative quality of your pics!! We were sitting next to each other, right? I am humbled.