I've had quite a quiet time of it over the last few days but have managed to catch up with a few duck year ticks that I missed earlier. Firstly on Wednesday, I saw the flock of 11 Gadwall on the sea from the Yacht Club. There were also three Kingfishers and a Common Sandpiper in the harbour, which was partially frozen over! I took a few photos of the frozen estuary too but both Steve and Gav had already posted some on their blogs, so I didn't bother sticking mine on! Well at the time anyway. Here's one of the river, unique because it also shows a staggeringly scarce-ish Tufted Duck. 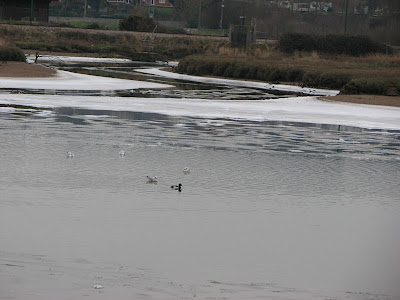 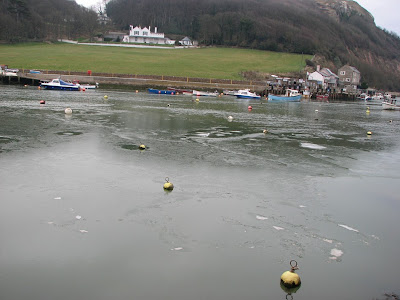 Partially frozen harbour - On the wall in the background just below the red life-belt holder was one of the three Kingfishers..... 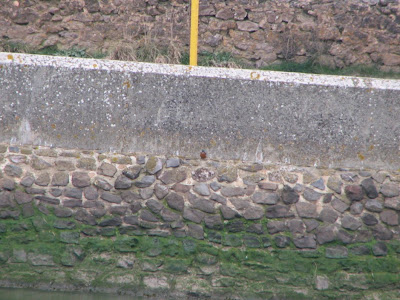 Could Thursday have been any more exciting than that? I hear you thinking. Well Yes, because I got great views of the female Goldeneye that Steve had spotted off the seafront, she was literally a couple of feet off the beach at times, but just wouldn't stay put long enough to have her photo taken. I did try a look at Lower Bruckland Ponds too but before I got out of the car I knew they were still frozen and duck-less because ...well...take a look at this. 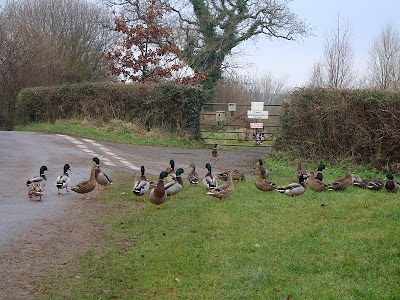 The local Brucklands' residents were leaving home - and they had decided to walk!

Today I couldn't get out until after lunch and then had to pop to Colyton on an errand so incorporated a dogwalk into this trip. First I went to Colyton WWTW to see how the Chiffchaffs were getting on. Not good is the answer, there were only about half a dozen of them feeding on the filter beds. A large fall in numbers. There's really no getting away from the fact that many of them will have succumbed to this prolonged freezing weather :-(

Whilst here I met a couple of birders who told me they had just seen a Dipper on the southern reaches of the River Coly. Thanks for the info folks! :-) I just had to extend Rex's walk and take a nice amble along the banks of the Coly. As soon as I got there I could hear a Dipper singing and I soon spotted him about one hundred metres south of Coles Mill. He was pretty difficult to approach at all closely, most probably due to Rex, who was 'ratting' along the bank. I did manage to get a couple of snaps but they're not much cop due to the lack of light, "raise the flash" the camera said, Yeah right! Anyway here's what I managed: 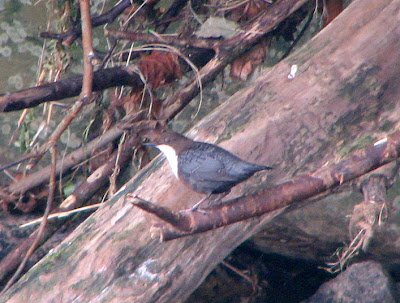 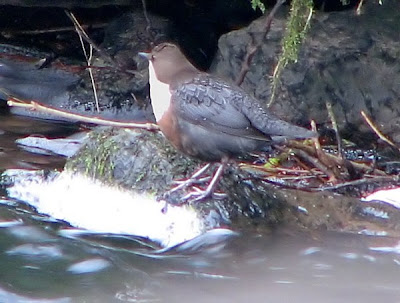 Nice bird to get on your yearlist, they're always on the Coly somewhere I reckon. There's just lots of it to look along!!

Two Black Redstarts were still in the harbour area today. A female type on the Trevelyan Road rooftops (and in my garden) and a young male around the Canoe Club/dinghy rack area.

Not long before I had to go out to work this afternoon I got a text from Gav telling me of a Pochard on the river, viewable from The Farm Gate if I was interested. Was I!? I'd missed it once already. Not only was I desperate enough to twitch a Pochard, I even left the house without putting on any socks first! My feet got a bit cold! I felt a tad on the sad side, deservedly so I think. Whilst at the Farm Gate Gav told me about his meeting the finder of the Spoonbill and related the man's gripping account to me in the minutest detail. What's the good of getting a right good 'gripping off' if you can't selflessly share it with others? I was suitably gripped.
Posted by Karen Woolley at 10:26 pm