For the first time in ages I got up early and ventured forth into the field. It was freezing, so much so in fact, that when I arrived at Lower Bruckland Ponds they were almost totally frozen!! I've never before seen any ice on them. Here's what one of the ponds looked like: 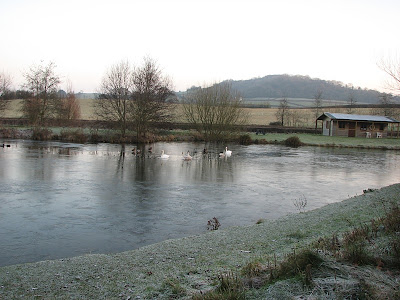 The swans in the centre were hogging what bit of water was available.
I was hoping to see some of the scarce ducks which have been all over the patch over the last few days, but all that was on offer here were the two usual Tufted Ducks. After leaving here I had a look at Black Hole Marsh, this too was frozen solid and the only birds I saw were a few Crows walking about on the ice and a pair of Shelduck which looked like they were only there because they'd been welded into the ice!

I soon gave up and went home for breakfast and then into Exeter with Martha. Once here I got a text from Steve" Pochard Lower Brucklands" it said. Typical! Some people are just charmed! When I got home I rushed back there to see it, do you think I did? Of course I didn't! The Tufties had gone too!

Apparently there's this bloke at the Yacht Club who has been keeping meticulous weather records in Seaton since 1962, He says that this recent cold weather is the longest run of days of sub-zero temperatures since he started keeping his records i.e. 47 years. No wonder it's bringing the ducks in, just a shame I can't seem to see any of them!

Finally, in case anyone's remotely interested in my patch yearlist total I've recounted it several times to make sure and it's 188, not gargantuan at all in fact, that was a little fib. It doesn't include the arguable Great Shearwater, but could do if needs be ;-). I'm pretty sure I was worried for nothing and wont in fact win the prized second hand golf balls, because looking at the patch list I'm sure Ian M has at least four birds I don't. Enjoy the golf balls Ian! If Gav doesn't have enough I know where I can lay my hands on some!
Posted by Karen Woolley at 9:16 pm