After weeks of procrastination, yesterday I finally decided to 'grasp the nettle', 'take the bull by the horns', 'bite the bullet' or any one of a hundred other idioms and make the six hour round trip to Zennor and the Snowy Owl. I tried to muster up a car load of birders but only Bun was able to come, he'd even seen it before but was still keen to see it again! We set off at 5:00 AM hoping to arrive at daybreak and this is almost exactly what happened. We arrived at 7:45 and it was only just beginning to get light, which was good because it gave us time to break out the flasks for a pre-twitch coffee. It certainly wasn't a very popular bird today. While we were waiting in the car a single birder turned up and that was it! The three of us made our way for about a kilometre over the boggy moorland until the owl was spotted sitting out on a large rock. 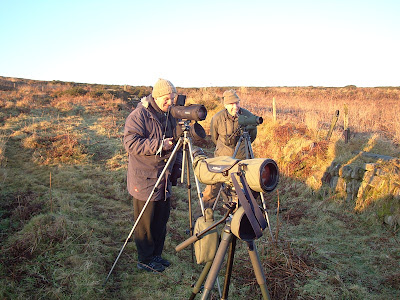 Smiling faces all round as scopes are directed towards their target which was only feet away!... 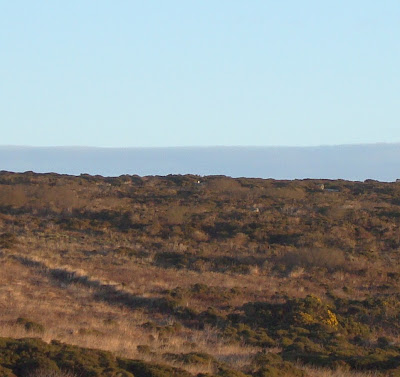 There it is! Look!! Right in the centre; that white specky blob just below the horizon, you can see it...*squints*.
OK I'll zoom in more... 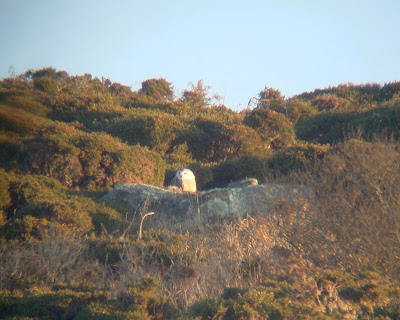 Tah-Da!! A much bigger blob. Actually (if you enlarge this) you can see that it's got eyes and a beak and everything!!
Seriously though we did have very good views through our scopes and the rising sun really made it stand out nicely. It was awake and looking around, a truly awesome bird!! It really doesn't matter that this is the best photo I could get because it just so happens that I got a lovely Christmas card from Steve, with a Snowy Owl picture on it and it's an almost exact representation of the Zennor bird. Take a look: 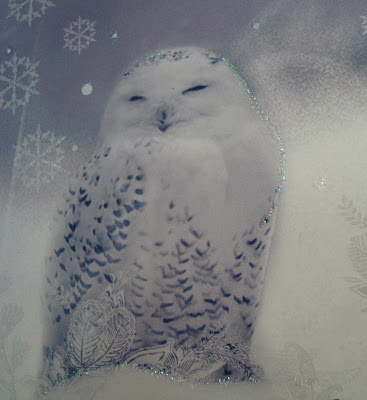 Our scope views looked exactly like this...OK, not exactly, obviously the eyes were open more and there was just a smidgen less glitter!!

The views on our way back to the car were simply stunning: 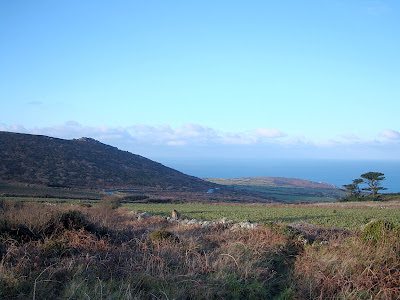 Looking to the Southwest from Zennor Moor. The colours were gorgeous!

We watched the owl for around an hour all told, leaving at 10-ish and were back in Seaton for 1:00PM. This was my first 'self- driven' twitch and it went very well indeed so I'm sure it's not going to be my last!
Posted by Karen Woolley at 8:39 pm