When I got a text from Ian 'Steve's dad' Waite this morning at about a quarter to ten telling of a Spoonbill at Coronation Corner I was a bit gripped. I thought I was probably going to miss it as I was about a third of the way to Southampton. Why? I was on another attempt to successfully twitch Waxwings. Some had been visiting a couple of spots in the city for the last couple of days and Southampton's a bit, ( only a bit mind), nearer than the Midlands. Somehow I managed to talk Rob into driving me there, he spends all week driving so I assumed he'd refuse, but he muttered something like" I can't think of a better way to spend my Sunday than to stand around on a housing estate looking at some bushes!" When we arrived at our destination there were a group of about ten or so birders there already, I approached one, he gleefully said " They were in that tree about twenty minutes ago" and here it is: 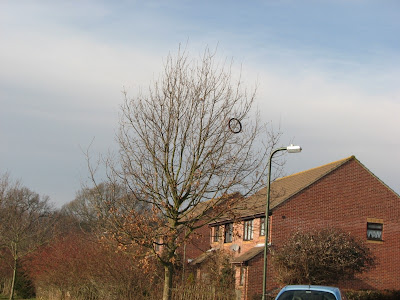 Tree and bushes that sometimes harbour Waxwings, see how the locals have thrown a bicycle tyre into the tree to give us something to look at when the birds aren't there. So thoughtful.

Fear not. I'm not going to only show pictures of empty trees this time because after about half an hour's wait a birder beckoned us from over the other side of the main road. After crossing the road in a safe and sensible manner I proceeded to RUN toward the assembled birders. Success!! The Waxwings were visible in a large oak tree, pretty distant with the sun behind, I'd optimistically gone without my scope today thinking they'd be just feet away, but at least I'd seen some, it was quite a big flock too. I took this distant snap. I love the crazy quiff! 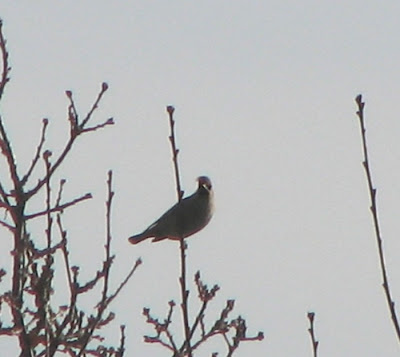 I thought I'd try and get to the other side of the tree, with the sun behind me a bit more and I'm glad I did because here the Waxwings were coming down into some small bushes about 15 feet away, I got some great views, but unfortunately No great photos. I was just trying to focus on a bird for my first stunning close up when a Sparrowhawk sped in sending the whole flock on it's way. I pressed the shutter anyway and got this awesome shot! At least I had chance to count them, there were 32 and they were my first ever! Fantastic! 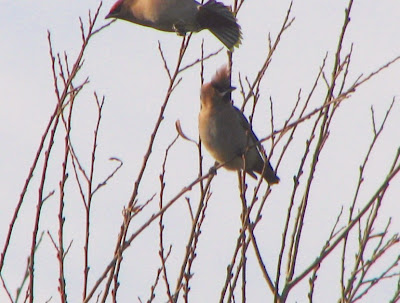 Rubbish photo but it's of WAXWINGS!! A bird I've been longing to see since I got my first bird book over thirty years ago.

At the back of my mind I was quietly hoping the Spoonbill would still be on the river when we got back and sure enough there it was, easily visible from the speeding car. Once at home I picked up my scope and rushed back out to see it. I took a few snaps and even though Gav has posted an 'ample sufficiency' of superb snaps on his blog a few more can't do any harm. This was only my third ever Spoonbill. A very good day, very good indeed! :-) 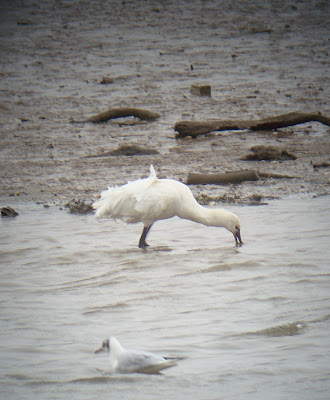 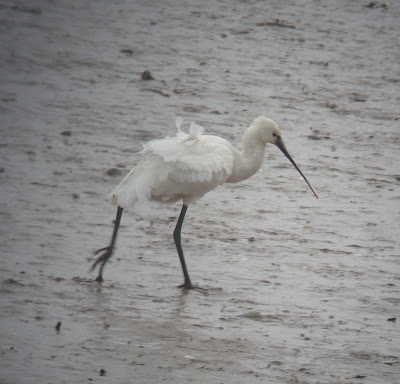 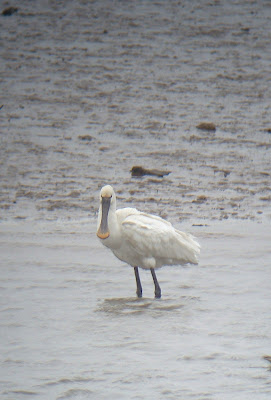 .... glaring.
Oh, one more thing. On the way east on the A31 you pass the grounds of Charborough House surrounded by one of the longest brick walls in England. Along this wall is 'The Stag Gate' which is obviously a gate with a statue of a stag atop of it. Not that unusual but if you look closely at the stag from some angles there's something not quite right. I took this photo as we drove past at some speed but you may be able to see the anomaly. 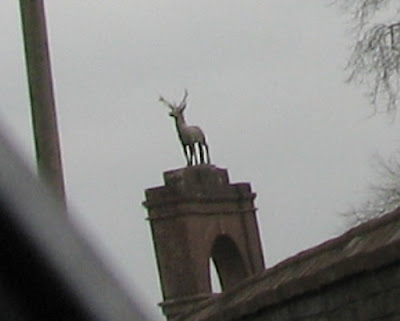 Can you see something wrong with it? It's got FIVE legs!

Apparently after the statue was erected it was noticed that from Charborough House itself the stag looked to have only three legs, which would never do obviously!! So a fifth leg was added and then four legs could be seen from the house... the landed gentry sure had some pressing issues in the nineteenth century.
Posted by Karen Woolley at 9:08 pm