Yes, I've been laid up all weekend with another bug. Oh well, it's nice to feel wanted, even if it is only as a breeding ground for nasty viruses! Today I  had to venture out for two reasons, firstly I had to take some urgent documents to the accountants and secondly Rex's been going stir crazy stuck within the confines of our small garden (yes, that's right no one else will take him for his walk, teenagers-don't you just love 'em). I took him to Morganhayes (least strenuous for me) and was pleased to hear several Crossbills  chupping away though I didn't manage to see them. This was the first time I've had any sign of them for quite a while now. I don't think I'll be seeing any Siskins here this winter though because the birch trees appear to have no catkins at all.
After this I dragged myself into Seaton and to the accountants to find that they're closed until the 5th of January, so much for urgent! It's all right for some I suppose.
Returning home alongside the estuary I stopped and joined Gav at Coronation Corner, to be honest I was feeling pretty unwell  but everytime I decided to leave, Gav said  something like "Hello, what's this ... another Med Gull" and I just had to see them all, didn't I? I managed to stay long enough to enjoy 4 Med Gulls in total, two adults, a second winter and a first winter. One adult was begging to be digiscoped, like they do, so we naturally obliged. 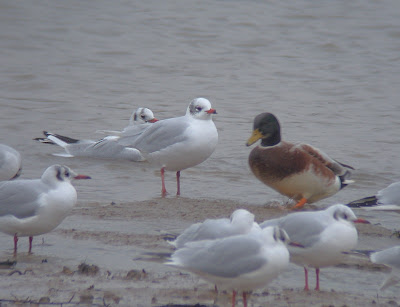 Med Gull having it's nap ruined by a marauding Mallard 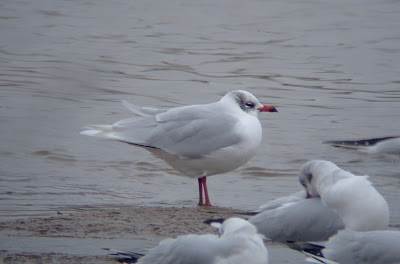 A bit of shut-eye at last
Posted by Karen Woolley at 7:09 pm