Rex Gets a Treat

I took Rex for his walk at Colyton WWTW (sewage farm) today, there were lots of Chiffchaffs in the trees, at least fifteen, I couldn't see the Siberian one today though. I met local birder (Hawfinch) John whilst there, after chatting for a while he left to walk along the River Axe towards Colyton and try to flush some Snipe or Jack Snipe even. I couldn't go with him coz I'd got inappropriate footwear on, ah well, I'm not fussed about Jack Snipe anyway, am I? ;-)

Due to today's date I decided to humiliate Rex with the annual airing of his festive scarf, he loves it! He was 'glowing with pride' as he hid in the footwell of the car. He just couldn't wait to get out an show it off. Oh, how the other dogs laughed! I think it looks very dashing: 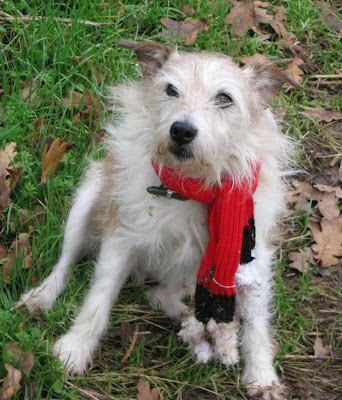 "Thanks a lot mum, you're all heart!"

On the way home I just had to stop at the estuary and look through the assembled gulls. Yesterday I had seen two Mediterranean Gulls, an adult and a second winter, today I could only see one adult. It was however, a bit closer than normal, thus allowing for a few digiscoped shots, again I just had to! They're so photogenic. :-) 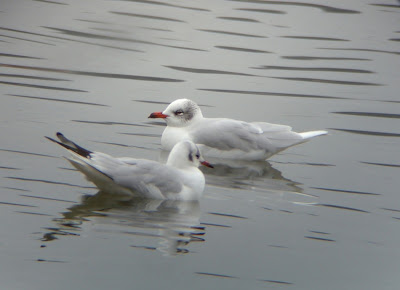 With BHG for comparison..... 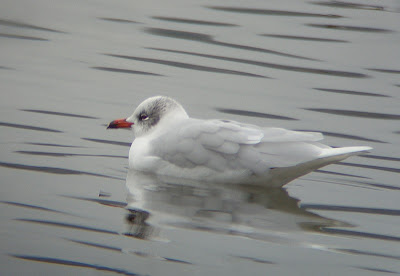 If I hadn't been working today I would have been sorely tempted to drive to Cornwall to see the Snowy Owl... may still be if it stays... hope it does!

Posted by Karen Woolley at 7:40 pm