Stop Me If You've Heard This Before.....

If you've read Steve's blog you will know that the Axe Estuary Ringing Group were mist netting at Colyford Common yesterday. I'm afraid I'm going to repeat some stuff Steve's already mentioned but I took the photo's so I might as well post them on here. What else can I do with them? After Steve had to leave for work we continued for almost another five hours so I do have some other birds to mention too! In fact we caught a total of 76 including another first for the group.

It was another freezing morning and after chiseling my way into the car I eventually arrived at Colyford Common at just after 07:30, it was only just getting light. There was an intense haw frost, the thickest I've seen for ages here, it was very pretty to look at but my feet were in painfully frozen mode before the first hour was up!! Here's a couple of photos of it: 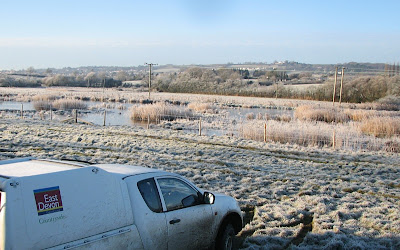 The water in the new reedbed was frozen solid making for some amusing 'running' Moorhens. 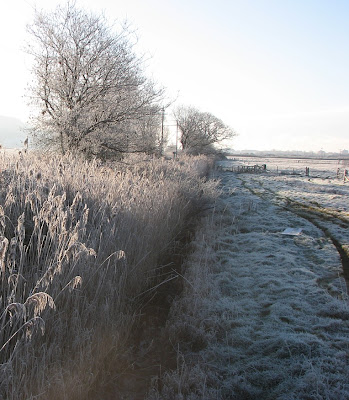 Ringing HQ was not in the nice cosy 'Colyford Box' but on the icy cold platform like so: 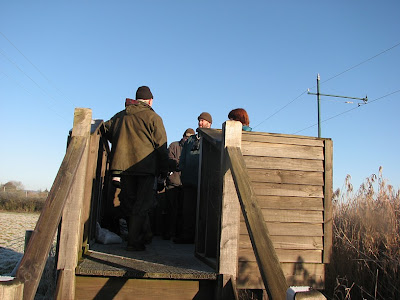 We were particularly hoping to catch and ring Pipits, especially Water Pipits and Rock Pipits and we weren't disappointed, with all three species caught. 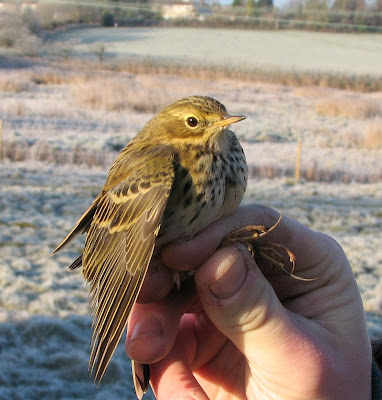 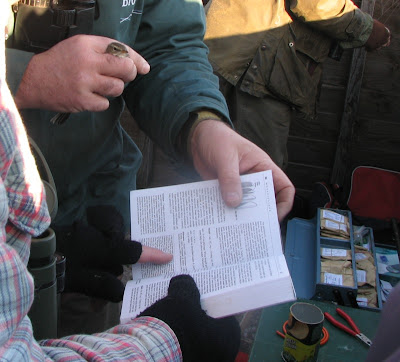 Looking up the finer points of Water Pipit Id. 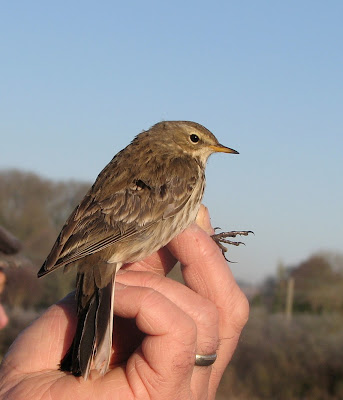 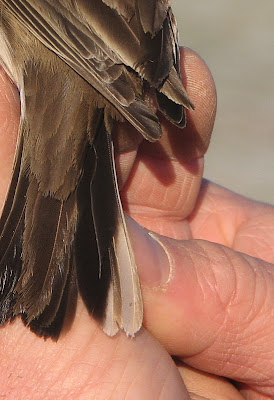 The clinching Id feature, as Steve mentioned in his blog the white wedge on the second to outermost tail feather is only seen on the Water Pipit. 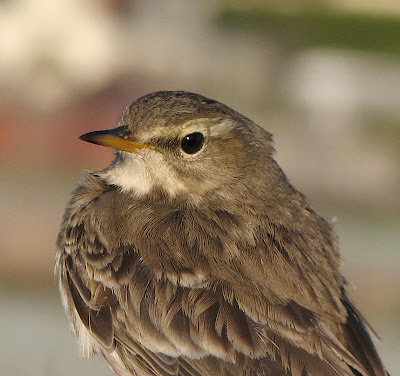 We also caught three Rock Pipits, possibly including littoralis. Don't ask me though! I ringed one of these and I'm pretty sure it was just an ordinary petrosus. As for the other two, well the jury's still out. Take a look at them, if you know your Rock Pipits you may have an opinion. 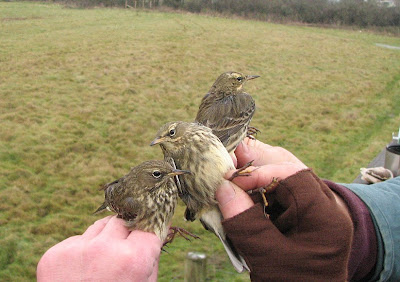 The Three Rockits
( that sounds like a cheesy 1960's pop group)
'My' bird is the one in the front, I'm convinced it's petrosus. What about the others though?

What else did we catch? As you probably already know there was a gorgeous male Cetti's Warbler, definitely NOT just a LBJ, and here he is: 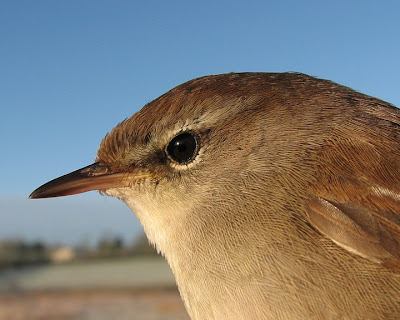 Not exactly the same as Steve's photo. It's facing the other way!! 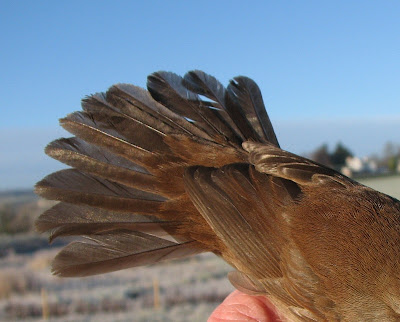 We caught lots of commoner birds including stacks of Blackbirds and Dunnocks, also Chaffinches, House Sparrows, Goldfinches, Wrens, Robins, a couple of Chiffchaffs which were probably wishing they'd kept flying to the south of France! A Song Thrush, Blue Tits, Great Tit and a small flock of Long-tailed Tits. Here are a few photos, they looked great in the sun: 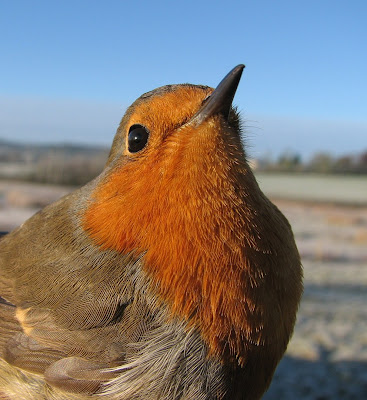 I got to 'stroke' a few of these 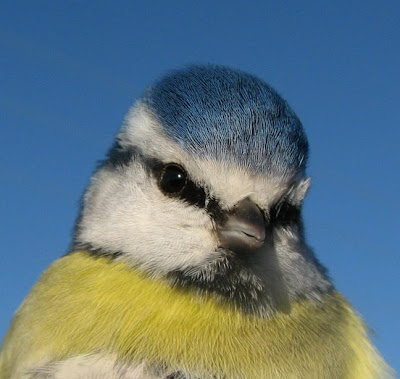 Steve 'hates' these but I don't, they're great! 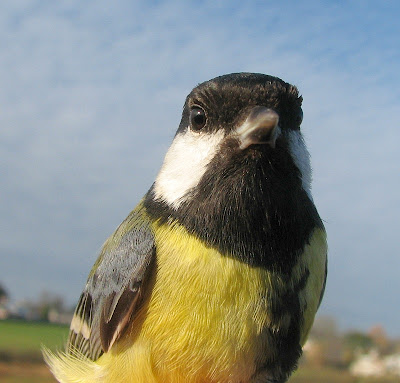 So are these, obviously! A nice female here. 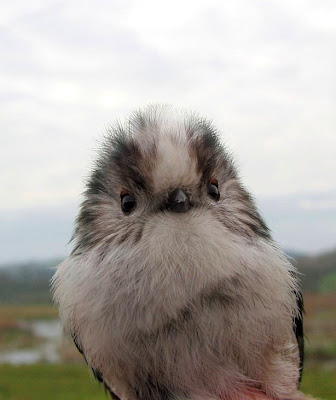 A big highlight for me was my first Goldcrest. They are just so small in the hand, about the size of a large grape!! The crest is just so vivid too. 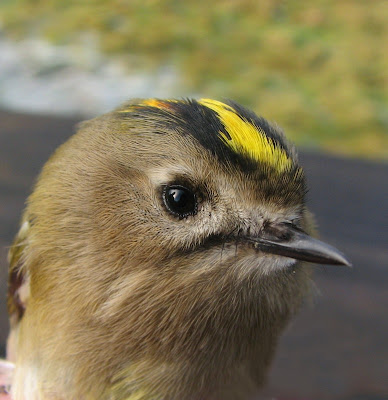 A couple of Kingfishers were unexpected, one an adult 're-trap' from a previous year and also a young female which would have hatched this year (I think at least our 18th this year). Kingfishers are always very docile in the hand and will lie still with absolutely no restraint like so: 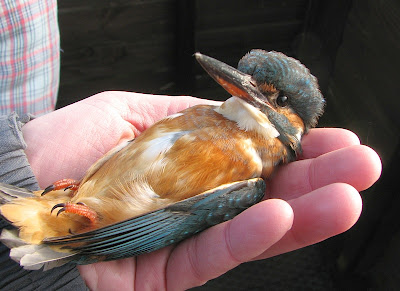 It's interesting behaviour, probably a defense mechanism. They never seem unduly stressed by being handled, but who really knows, I'm not pretending I do. They do quickly return to normal behaviour and are often seen fishing very near to where we originally caught them.

A 'new' bird for the group and definitely the 'Bird of The Day' was this Fieldfare, a gorgeous brute he was too. 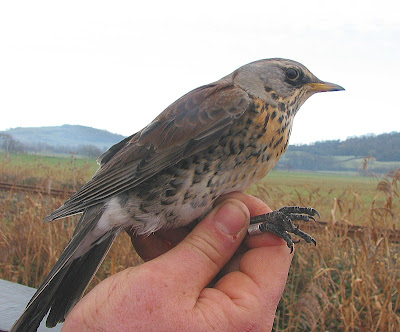 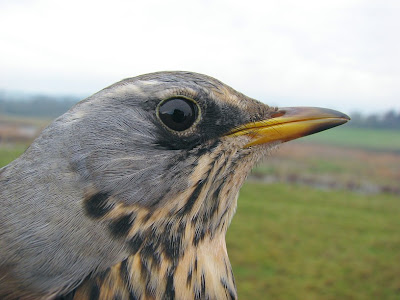 and a close up. Gorgeous! 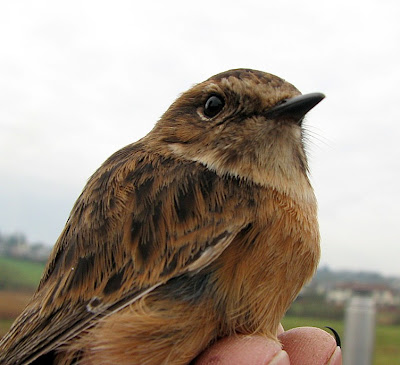 A bit boring after the Fieldfare but I've included this photo because an hour after it was taken I saw this same bird ( I can't be absolutely certain, obviously, there's a slim chance it was another we'd rung on a previous occasion, but there was only a single pair seen the whole time we were there) as I was leaving, she was feeding along the pathway by the gate, she moved off a bit more distant as I approached but I took a snap of her, it was almost getting dark so its very poor but you can make out the recently fitted ring (specs needed if worn). 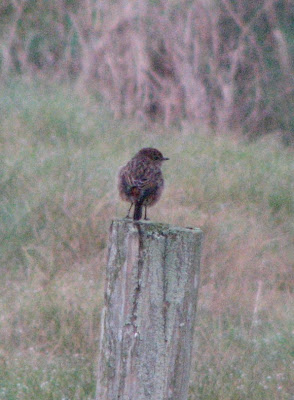 Posted by Karen Woolley at 8:51 am

Great post Karen. What a hardy bunch - it was well 'taters yesterday! Lovely set of snaps too.

Believe it or not it was that cold that one of the first birds we caught had a little tiny icicle attached to each toe!! On the up side,extreme cold = great excuse to eat copious amounts of cake! :-)