I was up until silly o'clock last night doing battle with my computer's virus, a battle that has at last been won! :-) Consequently after a little over four hours sleep I wasn't raring to go in the morning, but go I did, to Seaton Marshes for more duck cuddling. Abberton Traps this time though and a team of five of us caught and processed 17 Shelduck and one Moorhen (Steve took some photos of this, perhaps they'll appear on his blog soon). Although I enjoy handling wild ducks (coz they're so cute obviously) there is one major drawback, poo!! They don't half poo a lot! I know some may say "well what do you expect, they're scared!" But in my experience with domesticated ducks, profuse, plenteous, prolific pooing is what they do best! This morning I was on the recieving end of lots, and lot of it.....

After returning home and getting cleaned up I still had to take Rex for his walk and seeing as I needed to pop to Colyton I thought I'd walk him along the River there. It was pretty quiet birdwise at first and I was surprised that there were no Siskins around yet. No Dipper to be seen either.

About two years ago the Environment Agency fenced off a strip of land along the banks of one stretch of the river and planted trees in it. This was 'a bank stabilization project' apparently. Today it looks like this: 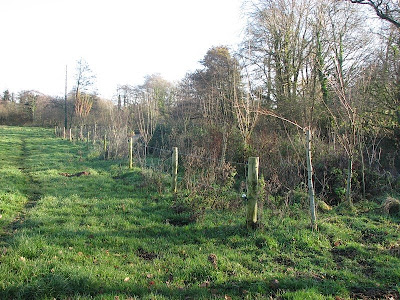 The trees are growing nicely and it looks to have been a succsess, the only snag is that this stretch of river is relatively straight and so not really in danger of rapid bank errosion. When I turned and faced the other way, where there's a bend in the river, I saw this: 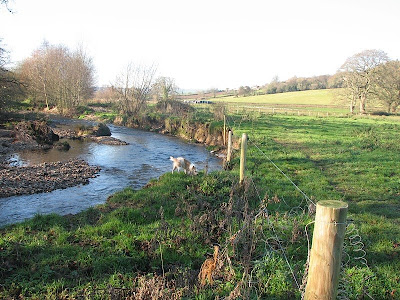 What a marvelous success!!

An eight foot strip planted with trees was no match for the river here. Only in September I was walking along the bank about level with Rex's bottom, that's about two metres gone in around three months!! When they planted the trees the bank here must have been out to nearly level with that gravel bank to the left of the picture, behind and above this you can just see a couple of the ex-trees languishing in the middle of the river.
When I reached my favourite stretch of river I was greeted by yet more poo!! Acres and acres of slurry strewn muddy grass. If any local birders were wondering why the estuary was so devoid of Black-headed Gulls earlier today, the answer is they were all here, there were easily over a thousand. 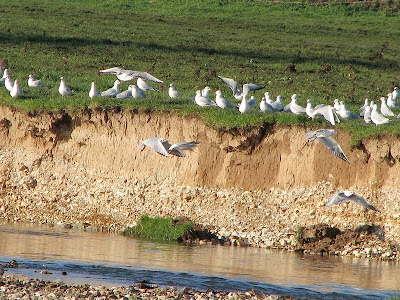 Not the usual River Coly fare

The gulls were quite unconcerned by our approach and I thought I'd be able to have a good look through them for a possible Med Gull, but no, Rex just couldn't help himself!! 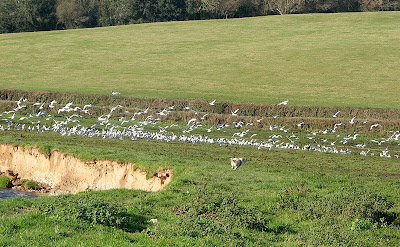 Apart from the gulls, I saw most of the usuals including three Buzzards, two Grey Wagtails, oudles of Pied Wagtails, a Green Woodpecker, two Mistle Thrushes, two Little Egrets, and a Grey Heron, which I tried to get a flight shot of, the results were all rubbish, but in this one at least, the bird was being faithful to the day's theme!! Glad I wasn't any closer!! 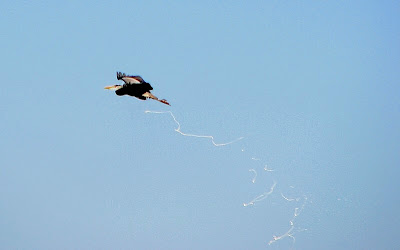 Posted by Karen Woolley at 8:29 pm