The Tide is High

Warning! Before reading further please note there are no birds mentioned at all!!!

After a night of southerly gales and torrential rain I was going to get out early to look at the sea, it was still raining quite hard when I awoke though, so I didn't find staying in bed a difficult choice to make. When I eventually peered out of the bedroom window towards the harbour I could immediately tell that the water was VERY high indeed and moving faster than I'd ever seen it before! I also noticed an unusually large number of people around. They were all looking at something, when my brain was finally fully 'booted up' I realised they were all gawping at a couple of boats which had sunk and another one perilously close to following them. In fact it later transpired that a total of four boats had indeed sunk, two of them were completely submerged or even swept out to sea!! Either way not visible.

Here's some pictures of the drama: I could tell the water had been very high when I saw this pheasant feeder in amongst the boats on the boat park. 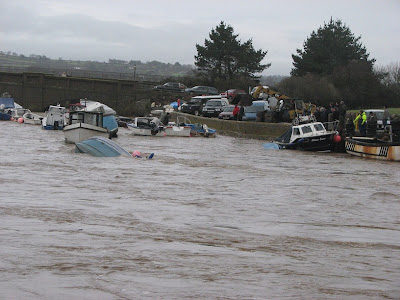 A view of the mayhem with both sunken boats visible 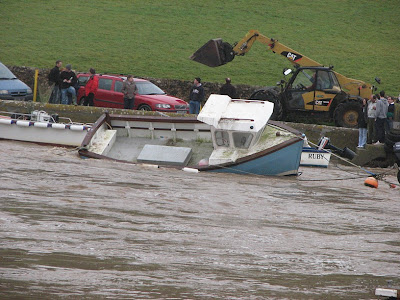 This was the boat that was near to capsizing. Notice the teleloader in the background, you don't think anyone would be reckless enough to get into that bucket and be inched out over the raging torrent do you? 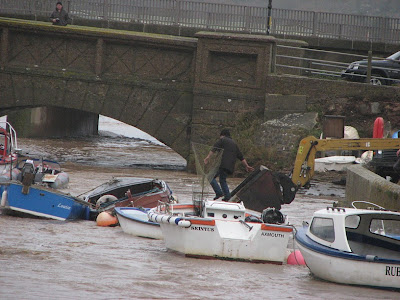 Of course they would! 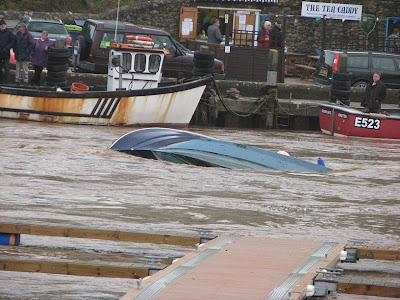 One of the unfortunates.
Notice in the background the Tea Caddy cafe is OPEN!! Would you believe me if I assured you this is quite normal on a wet Saturday morning in December!! It must have done a roaring trade as the srtiken boats were pulling in the crowds all day long. 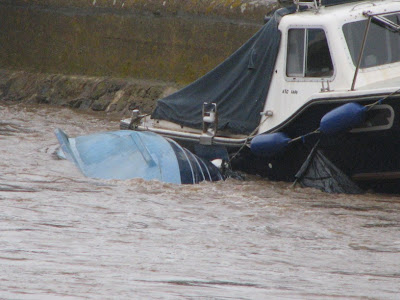 The second submerged boat. This one was later recovered. 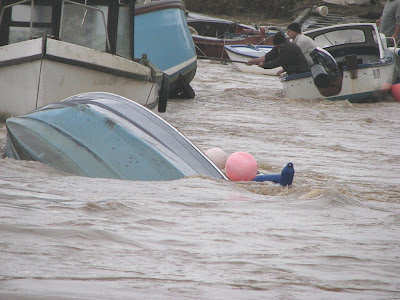 More reckless behaviour! Look at these guys leaning out of this boat with no life jackets. Moments after this photo was taken one of them leapt over the gap between the boats. The water was moving very quickly, much worse than it looks here. 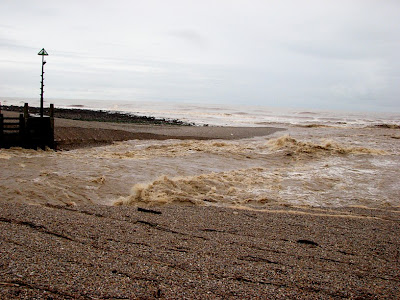 The river mouth. This is normally a bit of a gentle stream four hours after high water. I'd like to have seen it at high water, but perhaps not from this position!!

Finally to give you some idea of the speed of the flow here's a little video, it still doesn't look as impressive as it really was though!
Posted by Karen Woolley at 9:07 pm