Did I Say That?

Less than two hours after making this rash statement I was reading a text from Steve asking if I wanted to go looking for Jack Snipe at Coronation Corner again. My resolve crumbled as easily as a truckle of Wensleydale and within half an hour I was stomping around the salt marsh again. Not that it did any good, only four Common Snipe showed themselves today.

I took this photo whilst pointing my camera directly at the sun, it's turned out pretty atmospheric I think: 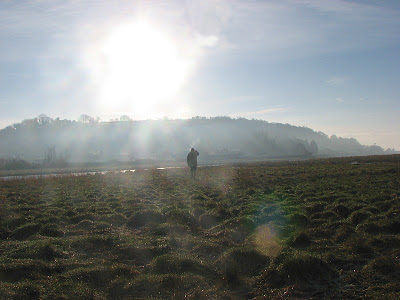 There were lots of ice-covered pools out on the salt marsh but obviously a couple of responsible adults like Steve and myself wouldn't indulge in anything as childish as ice smashing, would we?
In fact look at this photo of Steve: 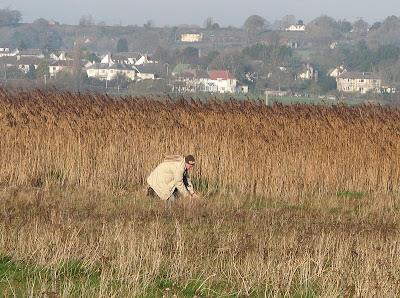 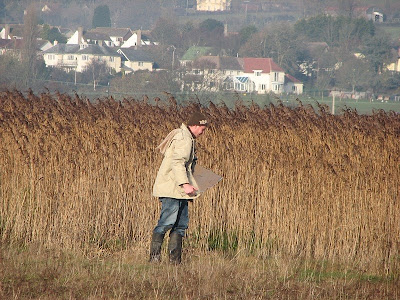 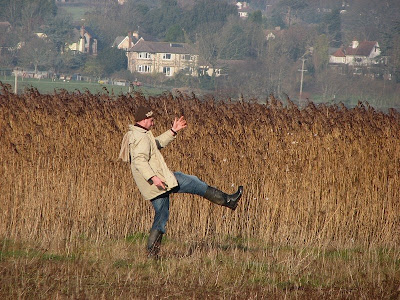 Ice smashing is great fun though. Well, so Steve tells me! ;-)

This afternoon I looked for the Firecrests at Jubilee Gardens but had no joy today. There was a nice Buzzard circling over the gardens though, being given a very hard time by the local Beer seagulls. Here's a photo of the (to quote our old friend J. Wentworth-Day) " craven-hearted, foul-smelling killer of young rabbits and eater of beetles". A bit harsh I think! 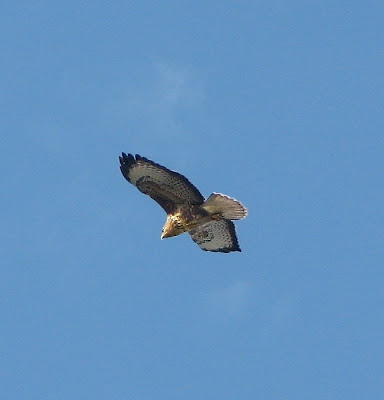 No coward in my eyes.
I spotted this description of the buzzard in a chapter of 'Wild Wings and Some Footsteps' about the Grey Heron in which I also read this fascinating gem:

" The heron, the old men of the marshes will tell you, has an oil or essence in his legs which distills slowly into the water as he stands, and draws the fish to him! That is why they sometimes shoot a heron, cut his legs off, boil them down until the oil floats in a thin scum, which they skim off with a spoon, and then mix with a paste of flour, water and honey which, they say, is the deadliest fish lure of them all.
But who would shoot so noble and grand a bird, either for the dubious pleasure of eating him or the baser alchemy of fish lures?"
Posted by Karen Woolley at 6:31 pm

Just check out the technical ability which is shown well in the final 'ice-kicking' photo!

Actually, that pic suggests I should have been in this.... http://uk.youtube.com/watch?v=IqhlQfXUk7w

I wondered what it reminded me of! Have you applied for a research fellowship on 'La Marche Futile' yet?