On Friday morning I accompanied Steve searching for Jack Snipe north of Coronation Corner, we saw 27 Common Snipe and zero Jack Snipe. The next day I decided to have a look for one at Kilmingon Quarry, where I also failed miserably, not because there weren't any but because I had another attack of 'quarraphobia', which is very strange because I did manage to go in there alone this summer, looking for Keeled Skimmers (explain!?) This is how far I got yesterday, you have to admit it looks terrifying! 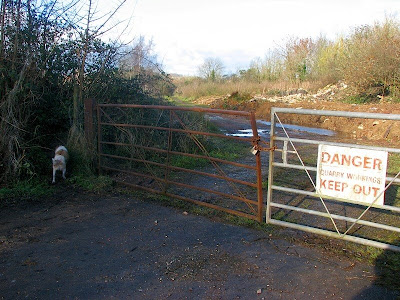 Rex was up for it, he was most disgruntled when I made him get back in the car. I 'need' Jack Snipe for my patch yearlist but to be honest I don't think I'll bother to make any more effort to get one. Why? Because I'm pretty sure our friendly local patch yearlisting competition has died the death, and quite frankly I was only in it for the half empty bottle of red wine!

Sunday morning a text from Bun telling of a Dartford Warbler (coincidentally and unimportant-ly another potential yeartick for me) showing well and vociferously on Beer Head had me rushing up there for a look. What did I see? 93! people, 18 dogs, 2 Dunnocks and a Robin!! It was almost as busy as the seafront (probably more Robins on the seafront though) Here's a snapshot taken at a random moment when it wasn't that busy: 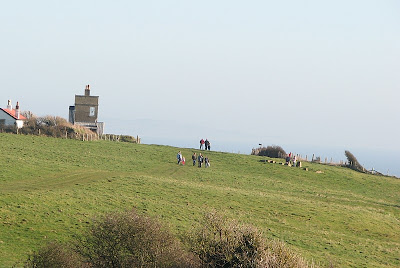 The total lack of birds had me switching to ground scanning mode where I found a couple of interesting-ish objects, firstly and very unexpected, my first ever Beer Head golf ball tick. It's a 'Wilson Prostaff' (I think) and it's been in the wars a bit, what has happened to it!?: 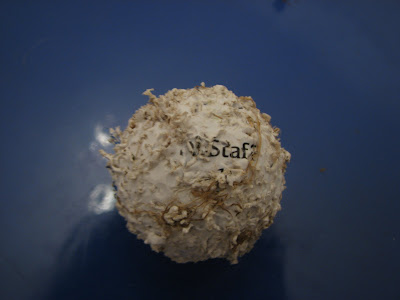 Secondly and much more interesting, this: 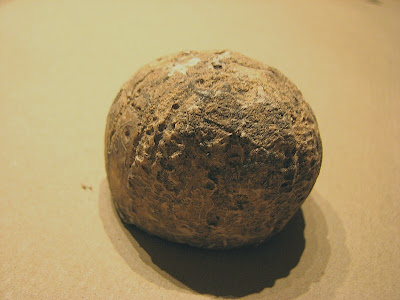 It's a fossil Echinoid (Sea Urchin) from the Cretaceous period, Echinocorys most probably. It's in pretty poor condition but you can make out some of the pattern where the spines were attached. Here's the bottom view: 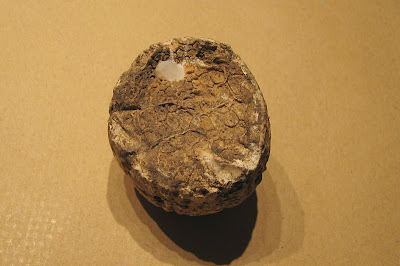 The white patch visible at the top is the peristome ( mouth opening).

So not a total waste of time, always something worth seeing on Beer Head!
Posted by Karen Woolley at 6:49 am

I wonder if the prostaff has been through an alimentary canal? I hope you're not giving up on the year list Karen - I would hate to think I've made the effort to dip Crossbill 37 times to no purpose!

It's just this kind of half-hearted attitude that convinces me that no one wants to win!

Re the prostaff. Of course! I hadn't thought of a cow's stomach.It does look partially digested/melted.