Spotted Crake - The Long Way Round!

It's common knowledge that there's a really obliging and showy Spotted Crake at Greylake in Somerset and that (as so hyperbolically stated by Bun in a text to me) everyone in Britain has seen it! Far too easy for us then. So on Monday morning we set off for Marizion in Cornwall where not only has there been a Spotted Crake but also a Citrine Wagtail, so two lifers were on the cards. We arrived at just after 8.00am, with the weather cool and windy and Marazion Marsh bleak and deserted. Birders easily outnumbered birds and there were only a handful of them. There had been no sign of the Wagtail all morning and the Crake had apparently been seem just once, briefly in flight, on the deck, disappearing to the left, or indeed to the right, in the southeast corner, in the southwest corner, on the moon!! Who knows!? Anyway after about two hours or so we hadn't had a sniff of either of them and so we popped down the road to Porthgwarra and Gwennap Head, the Southwest's hallowed seawatching spot (second only to Seaton) to try our luck. I'd never been to Porthgwarra before so would be happy just to see what it was like. Good job too because the seawatching wasn't very good at all due to terrible visibility. Not mist or low cloud but full sun, glaring off the sea and burning into the watching retinas! I couldn't bear to look through my scope for long but others seemed okay with it, I'm not sure how they do it though. Here's what it looked like. 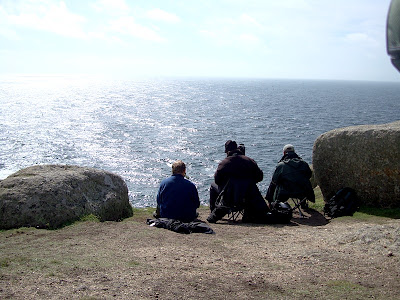 Shimmery, shiny Gwennap Head.
I could only see birds reasonably clearly after they had passed middle seawatcher ( Julian Thomas) and before they disappeared behind that huge rock to the right!

Almost as soon as we arrived Bun's pager told us that the Citrine Wagtail was now showing well at Marazion, this news and the poor visibility meant we only stayed around 45 minutes but in that short time we saw (between us) a Sooty Shearwater, half a dozen or so Manxies, a Great Skua, and an Arctic Skua, which was nice! A major highlight for me though was seeing my first ever Basking Sharks, three of them. Not too long after we'd left it did in fact cloud over and so conditions would have been a lot better when at 3.30 a Fea's Petrel flew past.

Back at Marazion Marsh the Wagtail had gone missing again and there had been no sign of any Crakes either. It was a mind numbingly boring two hours later that we actually spotted the Wagtail, we got reasonable views but it was a bit distant. We could see that it was very near to another vantage point and so we relocated there. It was indeed close, showing down to about 10 feet! Unfortunately it was behind a bank, which I wasn't tall enough to see over without standing on tip toe. There was a lower part of the bank but the lucky ( and in some cases tall) birders there wouldn't relinquish their vantage points for the more vertically challenged. Hence I haven't got any stunning photos. The bird wasn't very photogenic anyway, but made up for that by being 'educational'. I suspect that a juvenile Citrine Wagtail may quite easily be overlooked, it would blend in nicely with a flock of juvenile Yellow Wagtails if one didn't look too closely. Later in the afternoon we saw it fly off the marsh and onto the beach, it was calling as it flew directly overhead, so we know what to listen out for now.

We didn't see a Spotted Crake though, just heard 'many a merry tale' from local regulars who'd seen them every day, down to at least 6 inches!!

This morning Plan B was employed and we decided to join the rest of Britain's population and go and see the 'Greylake Crake'. We left Seaton at 6.00am, arrived at 7.10, saw the bird at 7.12, enjoyed fantastic views and were home again for 9.15. It really is very confiding, not in the least bit wary of humans, but very scared of Little Egrets and Grey Herons, every time one flew overhead it shot off into the undergrowth at breakneck speed.

First we watched from the opposite side of the small pool. It sat preening for several minutes so I took a bit of video footage like so:

Then a few photos: 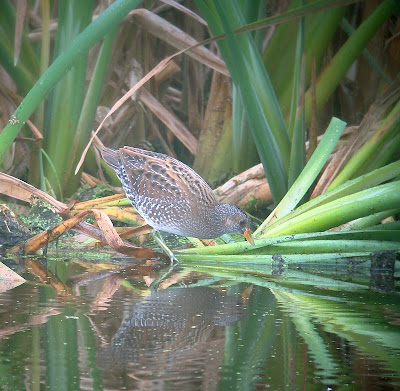 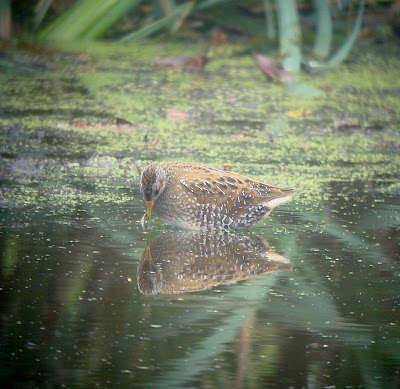 As we were leaving, walking along the boardwalk adjacent to the pool we could see the Crake right at the water's edge nearest to us. We stopped to watch and it just came nearer and nearer, eventually it was only about 6 feet in front of us! When it was this close it was obvious how very small they actually are, it looked so much bigger from a distance. I took a photo with my compact camera (no zoom) so you can see how close it came. 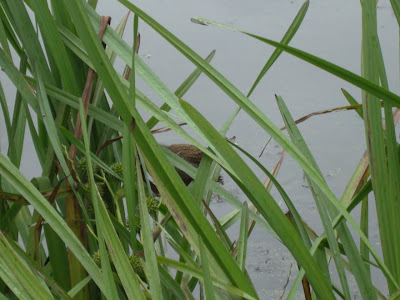 Shame it went behind the vegetation.

I tried to digiscope it but it was so near I couldn't fit it all in! 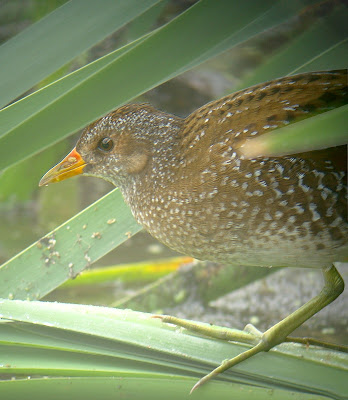 Some of the very gorgeous Spotted Crake, Lovely! :-)

Finally whilst idling away the hours at Marazion, Bun spotted this 'ere caterpillar. I haven't been able to find out what it will become. A moth I guess. I don't know which species though. Anyone got a book, or indeed a vast knowledge of caterpillars, I'd love to find out - what it is that is, not who's got a caterpillar book! 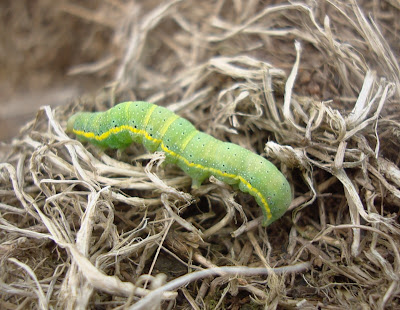 A ? Moth caterpillar.
It was about 5cm long if that helps.
Posted by Karen Woolley at 2:43 pm

That was a corking few days birding. You nailed the Citrine Wagtail, then the Spotted Crake in Somerset (I failed on Monday it was spooked for ages).

The Catterpilla is a species of Hawk Moth I understand but don't quote me.

In the second still photo of the spotted crake, it seems to be admring that fine looking spotted crake at its feet. ;-)

Thanks for commenting folks :-)

John - Yep, and yesterday just got better! :-)Sorry to hear you missed the crake.Perhaps there was a heron close by, or too many admirers. When we saw it we were the only people there.

Nat and Baileys the Goldie said...

Hi, me and Baileys were on Gwennap head and at the wagtail too- I thought I recognised you and now I know where from. Love the pictures
Nat

Hi Karen,
think the picture might be of a Bright-line Brown-eye moth caterpillar.
Catharine

Yes, We saw you and Baileys at Marazion and Porthgwarra, we sat right next to you at Gwennap Head in fact! Totally unaware who it was though.

Thanks for caterpillar ID, checked it out and it is indeed BLBE. Glad I didn't bring it home to keep until it emerged. One of the most boring moths there is ;-)