A Day on Portland

Yesterday morning I drove over to Portland for first light, to spend the day there. Bun's stopping at the Observatory for the week and had promised to show me around because I've only ever visited Portland once before and have no idea where all the birding hotspots are. The weather was going to be fine and dry after a clear night so I wasn't expecting to see any 'real goodies' bird wise but there were bound to be a few common migrants at least. I was particularly hoping to see four things. The PBO bookshop, which is very good indeed apparently, the Radipole Lake Ruddy Ducks and Bearded Tits, which I've always managed to avoid seeing on the few occasions I've been there (I've never seem a wild Ruddy Duck) and also Short-eared Owls, which usually show well of an evening at Portland Bill.

I stopped at the top of Abbotsbury Hill to take this snap of the sunrise over The Fleet and Portland. Always a breathtaking view from here barring fog!

Once at the Portland Bird Observatory I dipped my first target of the day, the Bookshop, well I saw it. My plan was to go in and look at the books though! 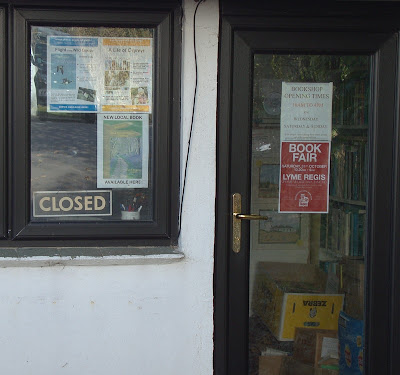 Drat!!
The contents of the shop are only' showing well' on Wednesday, Saturday and Sunday.

During the morning we spent hours wandering around and about but migrants were pretty thin on the ground. The Tawny Pipit had apparently been seen briefly in flight again by someone but nothing else notable was reported. I got to see plenty of good sites though, sites where Bun had seen superb birds in the past, needless to say I was gripped, gripped and gripped again. Great fun! Seriously though, it was good to see all the sites I read about on the Portland website each day. The most productive site yesterday was Barleycrates Lane, where the horse paddocks contained plenty of Wheatears, Linnets, Meadow Pipits, Wagtails, a few Stonechats and three gorgeous Whinchats, which were showing really well, allowing a few photos. 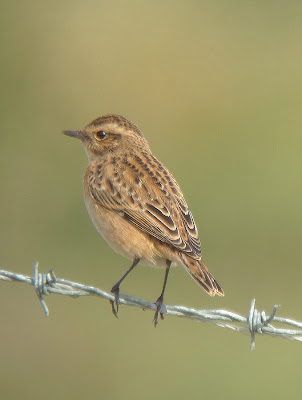 This one was quite 'rufous' in appearance.. 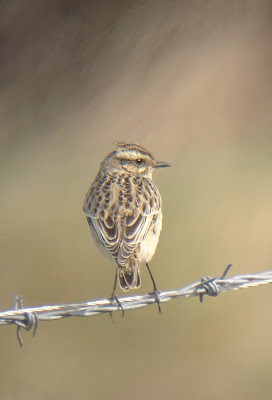 At about lunchtime we set off for Weymouth and Radipole Lake. There were major roadworks at Wyke Regis, which meant we were stuck in a long line of traffic for half and hour or so. This was okay though because as we queued past Ferry Bridge we wound down the window and checked out the birds on offer there. Saved us stopping and paying to park at least! There were plenty of Ringed Plovers, a few Dunlin and 5 lovely adult Mediterranean Gulls. Once at Radipole I shot off in eager anticipation of seeing my first ever non captive Ruddy Duck, Bun popped into the RSPB visitor centre and asked if they were about, he was told " No, they're not here anymore, they've gone" an innocuous enough remark it would seem but considering the species involved the connotations were a tad more sinister. "They've gone" most probably means they have become victims of the DFRA lead and RSPB backed 'ethnic cleansing' campaign in which all Ruddy Ducks must die! (they're are extremely unlikely to have left of their own accord, they've been there for years apparently and aren't known for their ranging tendencies ) Perhaps I'll catch up with one of these charming little ducks elsewhere soon, before it's too late!
We went for a look round the reserve and popped into the North Hide, from where the view looked like this. 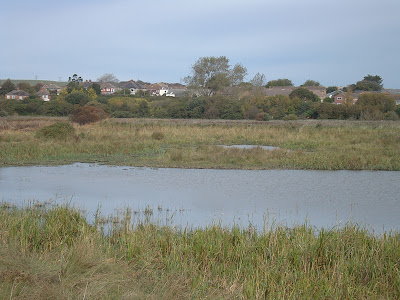 Very nice but birdless, in the half hour or so we were in here I saw one Swallow and a Wood Pigeon, Bun reckons he saw two Swallows, but then he's a big show off! On Saturday afternoon this self same view would have been graced by 'our' six Glossy Ibis, which stopped off briefly here after leaving Axmouth.
I dipped Bearded Tits here too for the umpteenth time! We did see a few nice birds though, all at the visitor centre end of the reserve. Including some nice views of Snipe feeding out in the open, a Curlew Sanpiper and the 'infamous' Hooded Merganser, another alien from 'across the pond' . He was looking stunning again now he's back in his breeding plumage. Let's hope for his sake though that he decides to keep his genes to himself! 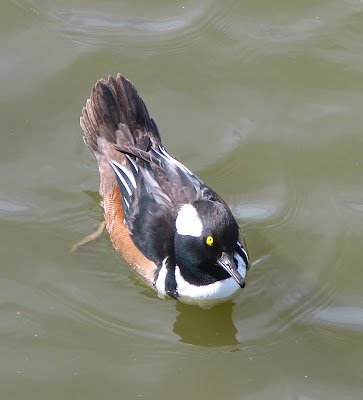 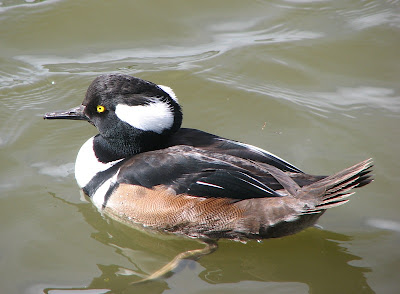 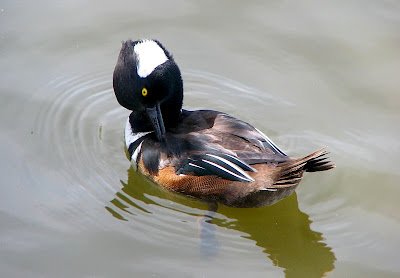 He's got a lot going for him.
Superbly photogenic and supremely tickable! ;-)
We were back at the Obs by five-ish and spent a while on the patio, with some of the other folks staying there. 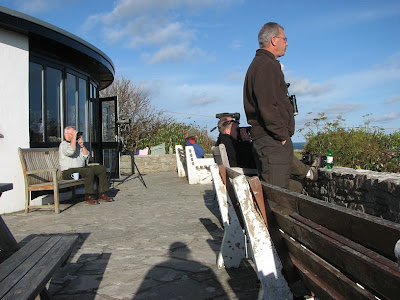 The 'famous' Obs patio.
I didn't get to 'tick' Martin Cade though, fourth dip of the day. 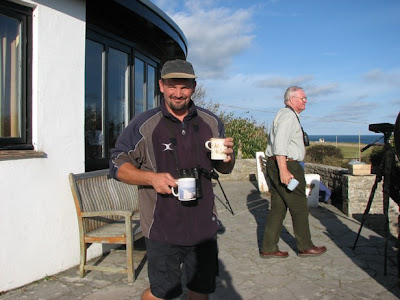 Look! Bun's made me a very welcome cuppa.
After taking this crafty snap and posting it on my blog I'm afraid it may well be the last!

After our cuppa we went for another wander round until dusk, first to the Obs Quarry to look at the 'most ticked' Little Owl in the country. I didn't need to tick him though so took a photo or two instead. I've tried to get photos of Little Owl on patch but it's always too dark when I see one. This one obligingly comes out while it's still daylight though. 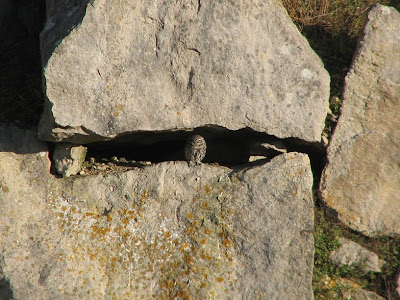 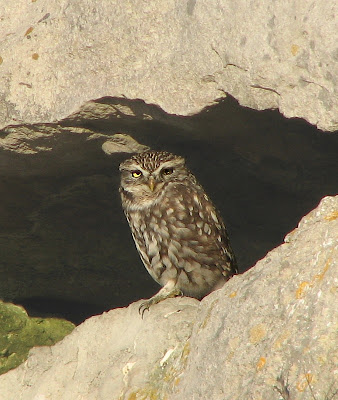 And here giving me his best one-eyed evil stare.

Also in the Obs Quarry we got great views of a Lesser Whitethroat eating blackberries in the evening sun, but he wouldn't keep still long enough for a photo. My final dip of the day was Short-eared Owl. We stayed out in the fields above the observatory until it was dark but with no luck. One had been seen on both of the two previous nights too. Oh well, I'll go back one evening later in the year when they have a few overwintering birds to see. 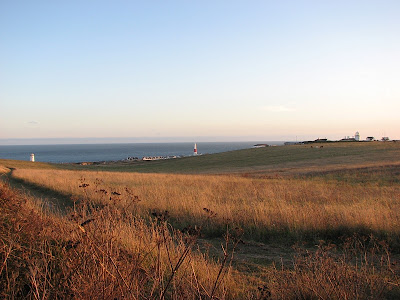 It looks lovely and warm in this evening shot of Portland Bill but a keen westerly wind was blowing and it had gotten pretty chilly as well as being owl-less. The lighthouse in the centre is at The Bill, the one to the left of the shot is the Observatory.

The best sight of the day was yet to come. The sun had dropped out of sight over a ridge and has we made our way downhill it came back into view low over the sea, sinking slowly below the western horizon. I suddenly thought of something, The Green Flash, conditions looked ideal and it's something I've always wanted to see and hadn't managed yet, this could be the time I thought. Bun hadn't heard of the phenomenon, so I told hm what we were looking for and we waited until the very last vestiges of the sun were visible. We then looked through our bins as the sun vanished and yes, there it was! A brilliant green flash just for the briefest of moments. Fantastic! It's really quite rare to get the right conditions to witness it in the UK, we were very lucky! Perhaps not as lucky as some people on a Scilly pelagic though who at the very same time were looking at a Black-browed Albatross !

On Sunday I walked Rex at a spot along the Coly, where I see Hornets at this time every year. I took a couple of photos of one, they really are fabulous insects one of my real favourites. 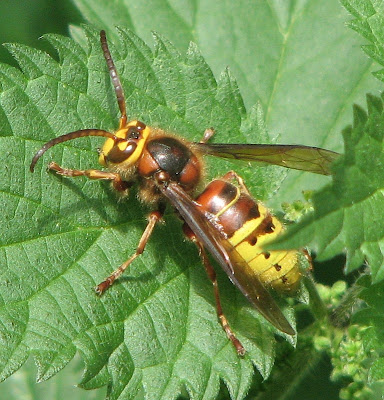 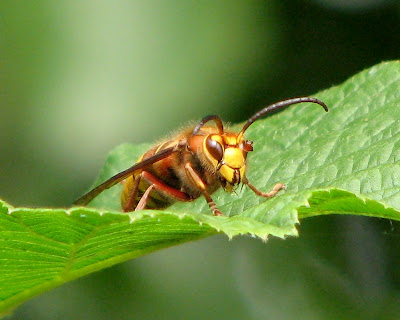 Aaaww look! She's wiping her eye with her ickle foot.
I also took a couple of snaps of Bumblebees enjoying the delights of yet another 'alien' Himalayan Balsam, one which is also probably earmarked for eradication if possible. Allegedly because it's so rampant that it destroys the biodiversity of an area. In the case of the riparian environment however, I'm in agreement with the theory that it only does so fantastically well here due to the immense eutrophication of the environment by farming. Eutrophication which in itself destroys the biodiversity of native species, species which can't cope with nutrient overload, thus allowing these escaped exotics (which can) to gain a foothold. Treat the cause not the symptoms comes to mind. Anyway, enough whinging from me. At least the bees like it. 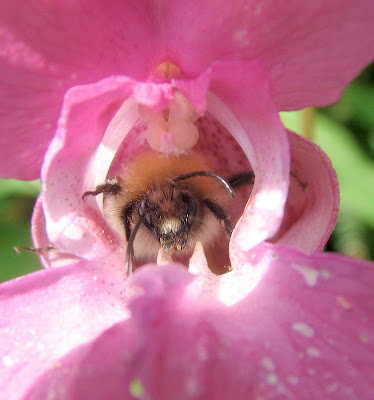 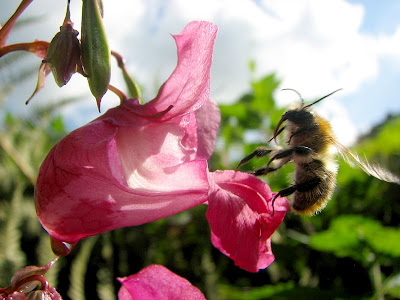 Posted by Karen Woolley at 1:32 pm

A wonderful post from what was clearly a wonderful day. Perfect!

Brilliant Post, a day on Portland Bill. One of my favourite birding spots, can't wait for next month and a weekend away there, birding in the day and the evening in the Pulpit Inn.

Sorry you had some dips during your day. But I can heartily recommend the Obs Bookshop, I have spent a fortune in there....

1. There are Ruddy Ducks at Radipole - saw a couple there in August.

2. Beardies - go early morning to Lodmoor or Radipole in Oct/Nov and you should hear parties pinging away before they head up and off in a SW direction.

3. That Hoody isn't plastic. It's the real thing. Oh yes!

Thanks Rob and John, It was indeed a great day even with the dips! :-)

1) I'm glad they're good at hiding then!

2) Thanks for the advice I'll definitely try it come November.

3)Well it's on my list, right next to today's Ruddy Shelduck ;-)

Thanks for commenting all it's appreciated.