A 'Bash About' on Beer Head

I ventured up to Beer Head pretty late this morning and was amazed to see that Gav was up there somewhere. ( His van was parked up, a dead giveaway that!). Amazed because normally he would have long since been and gone by then. It was 9.30. I didn't see him but inquired via mobile "Much About?" He said, yes there were good numbers of migrants about, just the commoner stuff so far, but it was well worth me " having a bash about." So I did.

There was a large flock of Meadow Pipits and Yellow Wagtails in amongst a large flock of sheep, I only counted 14 Yellow Wagtails, but there were likely to be many more than that. I couldn't get a good look at them because I had Rex with me this morning. Talking of which, because there was so much livestock around this morning I had to put him on his lead, just to be on the safe side. (not that he normally bothers with livestock at all). I had just attached his lead when he unexpectedly pulled away from me and I dropped my end of the lead. He then proceeded to walk directly through several, wet, slimy and very freshly deposited cow pats, dragging the lead behind him. Lucky old me, I got to hold the end of this for the next two hours! Brings an whole new meaning to the phrase 'green fingers'!!! :-0

Fortunately my mind was nicely diverted from this horrible fact by the nice birds that were on show. A good 20 or so Willow Warblers, just the two Wheatears, 6 Spotted Flycatchers and a lovely, really colourful first winter male Redstart. I took a few photos with the old S3 but it wasn't easy with one hand (yes, the green one) holding on to an over-active terrier. I shan't be combining Beer Head birding with dog walking again in a hurry that's for sure. :-) 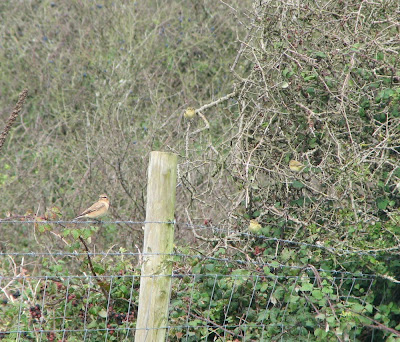 Migrants Galore!
Four in the one photo, only one's a Wheatear too! 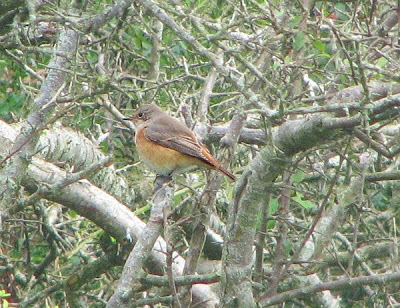 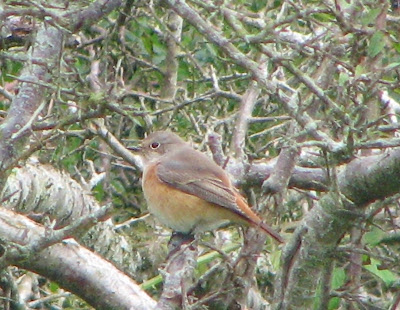 A bit blurred but you can see the grey feathers starting to come through on this photo. 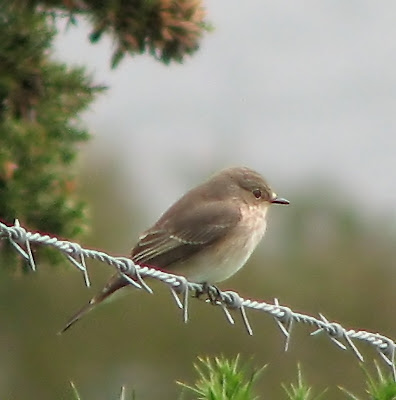 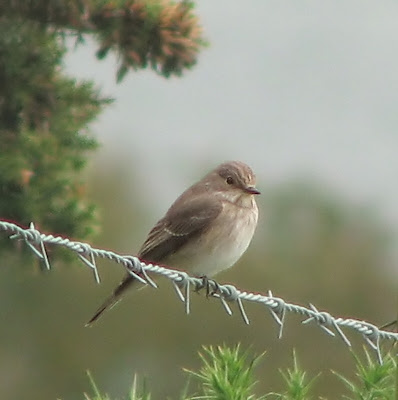 One of six Spotted Flycatchers that were in The Hollow.
They really are one of my all time favourite LBJs.
They have that 'certain something'
Posted by Karen Woolley at 8:46 pm