I was originally planning to go to Chew Valley Lake in Somerset this morning to see the Glossy Ibis. However, this never happened because (fortunately) I did a bit of research last night and discovered that the hide the bird could be seen from, The Startford Hide, was open to permit holders only. To get a permit first you need to prove that you are a fully paid up member of a bona fide birdwatching or ornithological society and then you're allowed to pay for a permit! Just a teeny bit over the top I think! I was willing to acquiesce, but wanted to visit at first light when I'm pretty sure the interrogation HQ would be closed for business. Oh well, hopefully one of the scores of others in the country will turn up somewhere close by. I even (just for a moment mind) toyed with the idea of going to Wales this morning to see the flock of ten. I'm sure glad I didn't coz they weren't there!!

Both Axe Cliff and Beer Head have been shrouded in thick fog all day today, still I decided to take Rex for his walk up on Axe Cliff anyway. Visibility was abysmal and the only birds I spotted through the gloom were several Yellowhammers. Here's a photo of the normally gorgeous view towards Seaton. 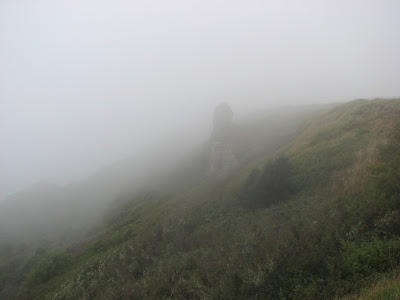 The only wildlife on show was of the invertebrate kind, a few butterflies, lots of Rush Veneers (immigrant micro moths which are fantastically dull), snails, beetles and something I haven't photographed much before, spiders. Here's one. 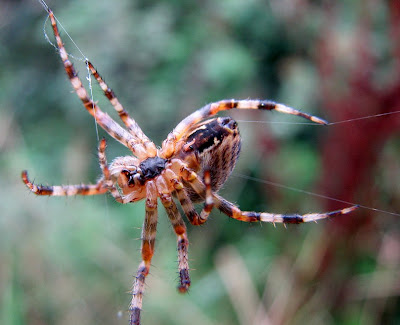 Underneath a Spider.
Something I've never looked closely at before, I wonder why?!
Rex excelled himself again and got lost, after almost an hour of calling, whistling and frantic searching I eventually found him on his way back to the car! He's more brains than I credit him with:-)

I was really surprised to see several golfers out on the course, well when I say see, I mean hear. How on earth they can see where their balls are is a mystery to me! In fact most of what I could hear of their conversations went like, " Have you seen my ball?" "No, have you seen mine?" 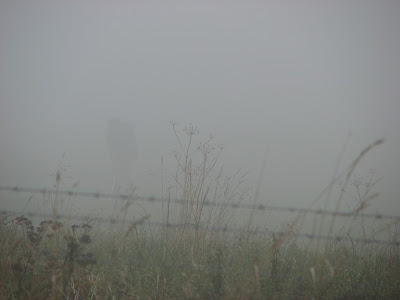 Here's one taking his second shot at the 14th.
I figured that some golfers are either totally bonkers or just extremely keen on their hobby, or indeed both!

I'm in no position to judge because several hours later I heard from Bun that there was a Pied Flycatcher in the Sheepwalk area of Beer Head. Even though Beer Head was still enveloped in a pea-souper I immediately tootled up there for a look-see. I'd like to think this was because I'm extremely keen! ;-) The Sheepwalk looked a bit like this: 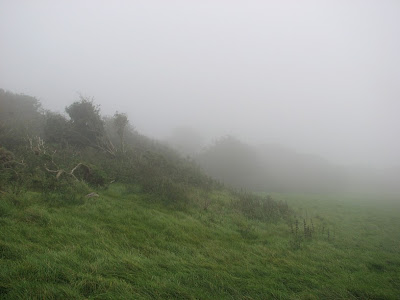 There's a Pied Flycatcher in there somewhere

Amazingly the Pied Fly was really easy to see and I got some lovely close views as it fed on insects from in the grass, most probably Rush Veneers. I sent out a text to Gav, who still needed Pied Fly for his patch yearlist and waited for him to arrive because he never seems to understand my crystal clear and pinpoint accurate directions and I'd have felt guilty if he'd missed it. There was a Spotted flycatcher here too. I took a few photos that aren't really that bad considering the gloomy conditions. A smashing little bird, so glad I decided to give it a go. Thanks for passing the news on Bun :-) 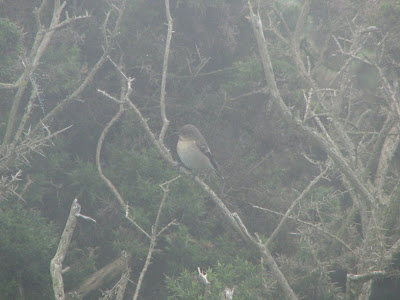 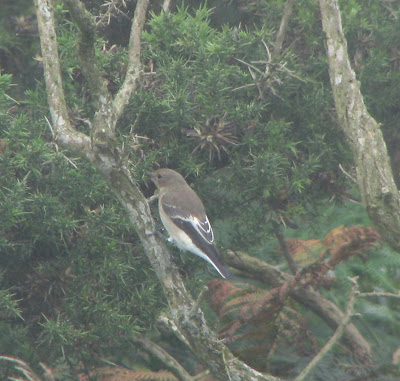 A couple of close ups too- very blurry and grainy but nevertheless CUTE! :-) 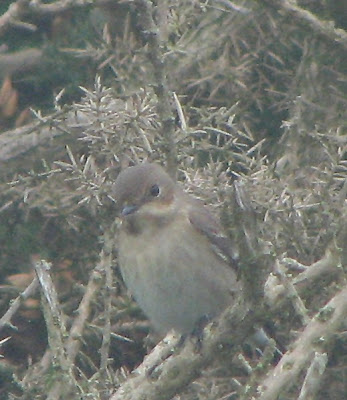 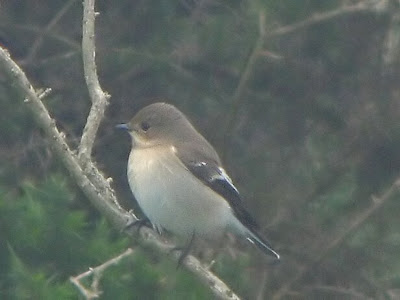 Posted by Karen Woolley at 9:12 pm

Thanks for kind comments all. :-)

Wilma - Errant golf balls are rife on Axe Cliff. Haven't had to dodge any flying ones yet but I have amassed a fine collection of over 60 of them...Though heaven knows why!?

Actually 25 of them came in handy once. http://karenwoolley.blogspot.com/2009/01/and-winner-is.html