I've been trying to get this post on for most of the day but our Internet connection as been playing up. So here we are, better late than never. If you read Gavin's blog (I mean, who doesn't!?) you'll already have read all about our trip to Pendeen Watch for a spot of watching (what else?). I'll tell you about it again though. Or you can just look at the pictures if you like. :-)

Friday morning I was round at Bun's house for 3.25am and as usual he was 'travelling light,' just bins, scope, small carrier bag with nowhere near enough 'snap' in it (necessitating emergency visit to Marazion pasty shop) and SHORTS!! I reckon he thinks he's still in Portugal. At 3.30 we were stopping to pick up Gav, who wasn't travelling light at all, when I saw him a famous phrase uttered by Roy Schneider in the film 'Jaws' instantly came to mind (albeit with a little alteration) - "I think we're going to need a bigger car!"

Seeing as Gav has already written an excellent account of the day's events and listed some of the birds that we saw (read it HERE) I'll just annotate a few photos. First though, I will just mention a few of my personal highlights, obviously the Sunfish, which were a first for me too and also the Sabine's Gulls, the 27 Arctic Skuas (I'd only previously seen two this year) and the large numbers of Grey Phalaropes and Puffins. Also the Baird's Sandpiper at Marazion, Bun's and my fourth lifer of the week. Brilliant Stuff! 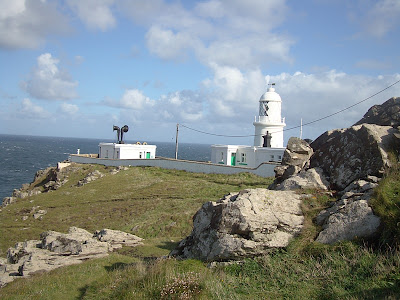 Lighthouse and foghorn at Pendeen Watch 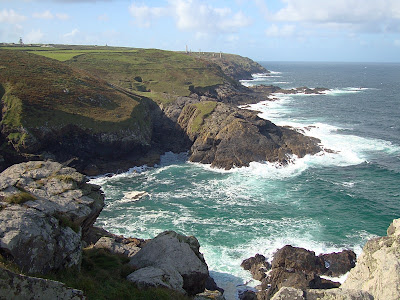 A scenic cove,
I found this lovely view whilst looking for some 'bushes to visit' (there ain't any bushes at Pendeen Watch though) :-( 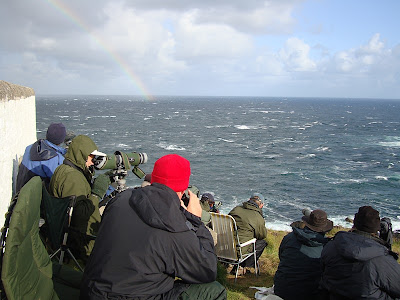 Seawatchers in 'action'.
The distant rainbow looks scenic but heralded the approach of a nasty squall in which some of us (who forgot our brollies) got wet and cold! Gav's quite difficult to pick out in this photo due to his subtle hat. (You'll never catch me wearing such loud headgear) 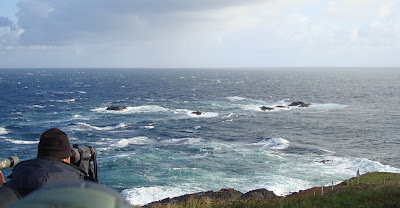 My useful focal points:
The right rock, the middle rock, the left rock and Julian Thomas (many times I was heard to say " it's just coming out from behind Julian now!") 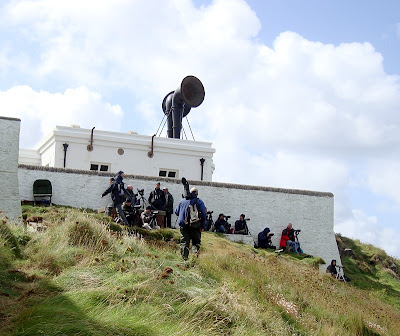 Bun and Gav returning to base after our quick trip to Marazion.
You can see Gav rushing back to reclaim his 'throne', I mean just look at it, it's like a sofa!! 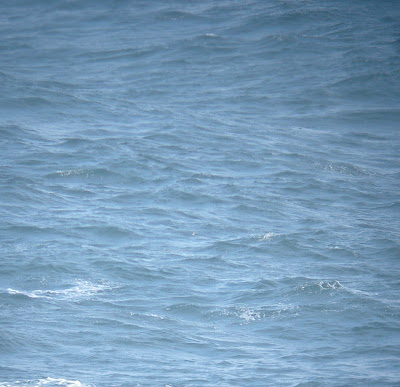 After I helped Gav get some digiscoped shots of a Basking Shark. I got a bit too ambitious. I decided I'd be able to get one of a Grey Phalarope that was sat on the sea all of half a kilometre away!! Gav doubted that I could pull off such a feat, but I did. It is there, smack in the centre of this photo. It really is one, honest. 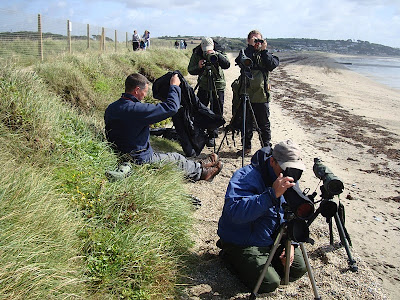 At Marizion beach.
Bun and two others admire the Baird's Sandpiper, while Gav admires...his coat!?

The Baird's Sandpiper was very difficult to digiscope because it was so active, I even struggled to keep a video in focus. 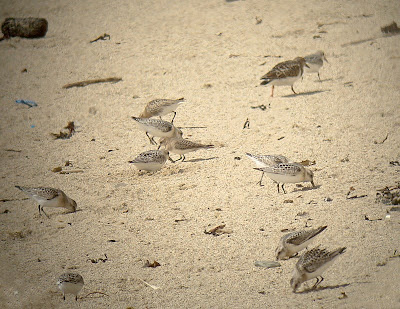 Baird's in amongst Sanderlings et al. 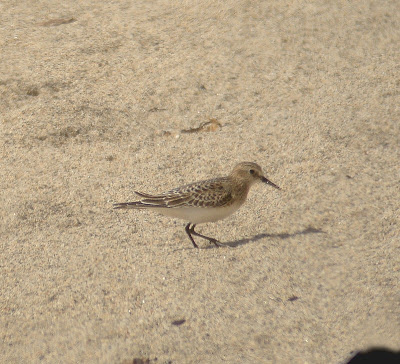 On it's own, and still for a nanosecond.
Tonight was Seaton Carnival, a big event in the town's calender. I'd never experienced anything like carnival until we moved to East Devon, they don't seem to have them in't Midlands. I've seen Colyton Carnival a few times, but it's not really my sort of thing, I woudn't travel to one. Last year and this though I've been almost forced to watch Seaton Carnival because it starts off down our road. The start time is 8pm but floats and 'stuff' arrive all afternoon and rehearse from about 5pm, spoiling my afternoon nap! 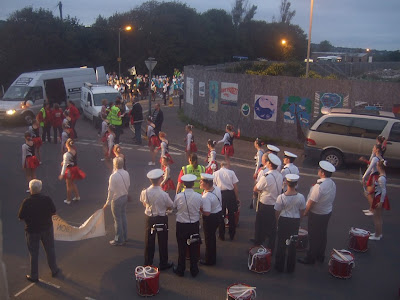 Out the side window
The British Legion and Majorettes as far as the eye can see!! 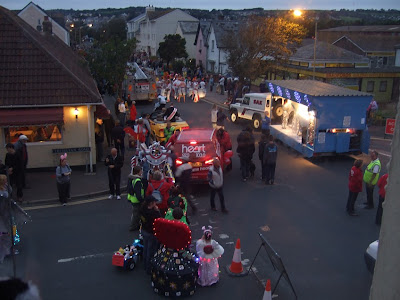 Out of the front. 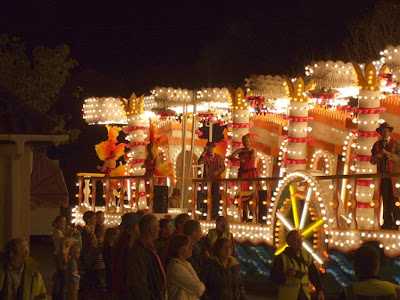 The mighty Sid Vale Carnival Club, who win every year!
Posted by Karen Woolley at 9:54 pm

Looks like you had a good trip,good ticks.
Well done.
John.