It's one whole year today since I started my blog, I can't believe I've been blogging for that long, I really thought it wouldn't last. Today's post is number 178, so over the year I've published exactly 0.48767 posts per day. Because I'm such a mathematical genius I know that's very, very nearly one post every other day, so I've been pretty prolific really, haven't I!?

I have thought about stopping a few times, for example when I've suffered from temporary 'blogger's block' or an attack of low self esteem, but I'm pleased I've stayed with it. Where else can I offload the 'Niagra of naffness' which emanates from my small collection of digital cameras?

I was hoping to have something to blog about today other than my anniversary but I haven't been out and about much due to spraining my foot while on Axe Cliff yesterday. I took Rex for a walk though and whilst crossing a field full of grass and clover mix I casually looked down to see if I could spot a four leaved clover and after finding two in a matter of minutes I came to the conclusion that they can't be nearly has rare as they are made out to be. 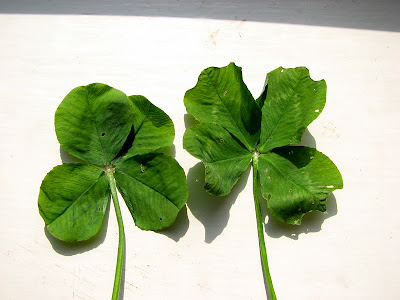 Rare as rocking horse droppings? I think not!

It has been estimated (I'm not sure who by though) that they occur at a rate of 1 in 10,000, and hence their rarity makes the finder lucky. Well I'm either very lucky or they're really pretty common. I wish I found it as easy to spot rare birds! Some people may say "Yes, but to do that you'll need to stop staring at the ground!" I can't help it though, it's just covered with great stuff, waiting to be found.

A lot of drivel I know. And guess what? There's more where that came from, at least another years worth! ;-)
Posted by Karen Woolley at 9:06 pm

Well done for keeping at it, and reaching your first blog birthday, Karen.
Don`t knock yourself by your drivel comment. It`s been a very entertaining read, supported by some wonderful photos.
Here`s to the next 12 months.

PS : that caterpillar in the previous post, has really got me stumped.

Congratulations on the anniversary from me too, Karen. I only recently discovered your blog and am hooked - it's interesting, witty, a real pleasure. All the best for the year ahead.
I haven't found any Quadrifolium for years!

Thanks Rob, I enjoy your blog too, very educational as well as entertaining.

Congrats from this side of the Atlantic, too! That is a wonderful achievment and I hope the first of many. Apologies for being so late to comment; I have only just returned the internet-scarce jungles of Belize and am catching up on what the world has been up to for the past 2 weeks.