I haven't been out and about much this week due to being host to a lovely little virus for most of it. The news from Axe Cliff isn't good, on Thursday the farmer was spaying the stubble fields with crushed lime and by this morning most of them had already been ploughed.

Today the plan had been to go and see the Long-billed Dowitcher at Chew Valley Lake, me having been inept enough to dip the long staying one at Bowling Green Marsh, it was there for all of FOUR months and I only tried for it once! Bun wasn't able to come with me though because he went off to twitch the Sandhill Crane on Friday evening and still hadn't gotten home by lunchtime today. Not to worry though, there's one on the Scillies which may, just, possibly still be there when we go in two weeks time! You may well be thinking "Why couldn't I just go for it on my own?" Well that's because I'm far too much of a wimp to venture forth to the wild uncharted shores of Chew Valley Lake alone. I'd be scared! ;-)

Therefore plan B had to be implemented.

TodayRadipole Lake was playing host to another example of its specialty 'allegedly un-tickable, exotic floating eye candy' First Hooded Merganser and now Ruddy Shelduck! Great! A lifer for me too in a 'not in a zoo' kind of way. I was there in a flash but unfortunately hadn't got enough change for the carpark and could only pay for a measly hour. Long enough to look at a few ducks you may think but they were showing from the North Hide, a good fifteen minute walk from the carpark, which would only give me 30 minutes to see them. When I got there they were hiding behind some reeds, eek! The minutes ticked away, anxious beads of perspiration appeared on my brow, amongst the vegetation tiny glimpses of bright ginger tormented me, until finally a brief tickable view through a small gap in the reeds as each one sailed briefly into and back out of view. It looked a bit like this. 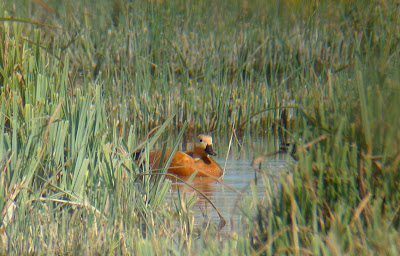 When my time was up and I was just about to leave they sailed serenely out into full view and showed really well. From where I was standing they were showing on the far edge just to the right of Julian Thomas! Yes, again! They were really. 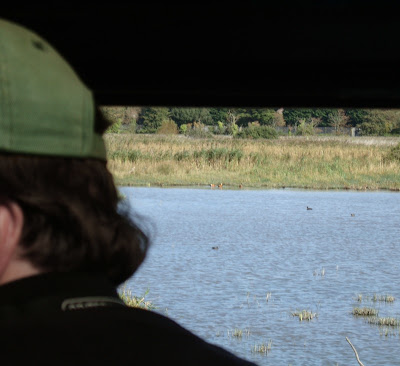 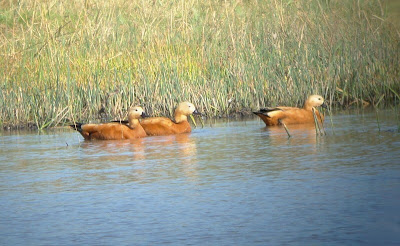 Cor! Look at them beauties. Tick, Tick, Tick!!
They're on my list. :-)
I spent much too long admiring them and getting a photo, leaving myself far less than the required fifteen minutes to get back to my car. Chances were that it'd be OK, but If I did get a £30 parking fine would it have been worth it? In all honesty, I think not. So I had to run! Well I only ran for a bit, mostly I just walked really, really quickly. All the people I passed were just out for a leisurely Sunday afternoon stroll in the glorious warm sunshine and looked quite amused to see this gasping, heavily laden( scope, bag, two cameras, bins, snickers bar) 'woman' storming past. Even though I am a woman I can't get away with saying that I was 'gently glowing' because by the time I reached my car, one minute late, I was in fact gently glowing like a horse! No ticket though. Just a big fat tick! :-)
Posted by Karen Woolley at 6:59 pm