At twenty past six this evening I was just lounging around on the sofa, well nodding off actually when I received two simultaneous and almost identical texts from Steve and Bun " Wilson's Phalarope - Bowling Green Marsh." Steve's had the word 'pants' attached to the beginning of it. He was just miffed that it wasn't on our own Black Hole Marsh, but I figured Bun would be thinking of twitching it, I certainly was because normally I wouldn't have been able to go due to work but I have a week off - alright that's just a feeble excuse, I was, because I am a twitcher! Ten minutes later we were on our way. The weather was atrocious but was due to clear from the west very shortly, and sure enough, even before reaching halfway, the rain stopped and the sun came out. Bowling Green Marsh looked fabulous in the evening sun, and the Wilson's Phalarope was still there. We were just setting up our scopes to get a good view when a couple of gunshots rang out. Oh no! Widfowlers! Every wader on the marsh took to the air in panic and it seemed an age before the Phalarope stopped gaining height and decided to return to the marsh. Phew! It landed quite distantly (as is the norm here) but we had some good views when it periodically came out from behind other waders. A very smart little bird, I'm very pleased we decided to go! :-)

It was miles too distant for photos but it's never stopped me before. 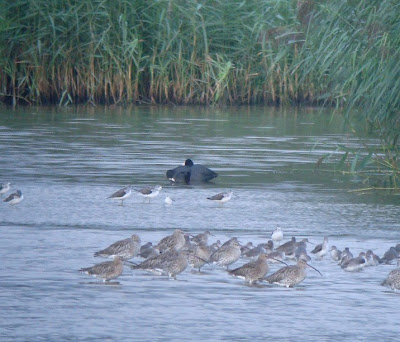 I can't even really say "you can tell what it is though" coz you most probably can't.
That's it in front of the Coots between the Greenshank, yes, that's right that speck!

EDIT: I've found a slightly better photo of it now, a bit less of a speck but mighty blurry! 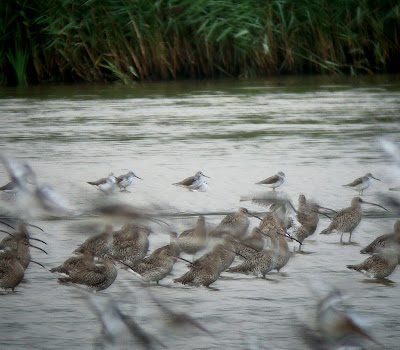 It's there in front of the centre Greenshank

Perhaps you can see it better in this video, or not. It is moving though, that should help. :-)

Posted by Karen Woolley at 9:41 pm

Lounging on the sofa? When you could have been at the Yacht Club getting blown to bits and soaked while putting together a fine count of Gannets?