Had a frustrating couple of hours on Beer Head yesterday morning, when Ian M and I both had brief unsatisfying glimpses of a Hippolais warbler, Ian had a good but brief view of the head and I saw the body. We both had a couple of flight views as well. The yellow tinge to the plumage suggested Icterine or Melodious (most likely anyhow) but it just wasn't seen well enough for long enough. Bun and Steve came to help try and relocate it but it had vaished. Either would have been a nice lifer for me too, oh well that's birding!

Today I didn't do any birding but instead 'twitched' my last butterfly of the season, a real goody too, the elusive Brown Hairstreak. I've never seen one before and was aware that they can be very difficult to see 'perched up' and even more difficult to photograph. So when I set off for a site in South Devon I wasn't that hopeful because even though the weather was nice and sunny there was quite a keen wind blowing, which isn't good. I took my son George with me for company and an extra set of eyes.

After being on site for just over an hour we'd only had a very brief flight view or two. I was beginning to think we were going to have to make do with that when one just suddenly appeared out of nowhere and landed on a blackthorn sprig right in front of us, it was a female looking for an egg-laying site. After crawling about in the branches for a while she landed in the grass and sunned herself before returning to the blackthorn once more, all the time giving us excellent views like these. 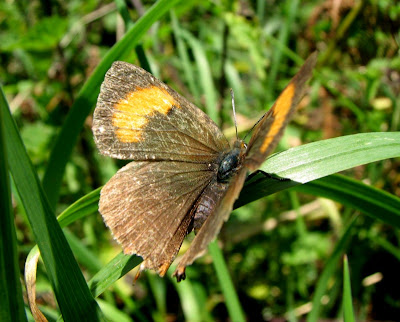 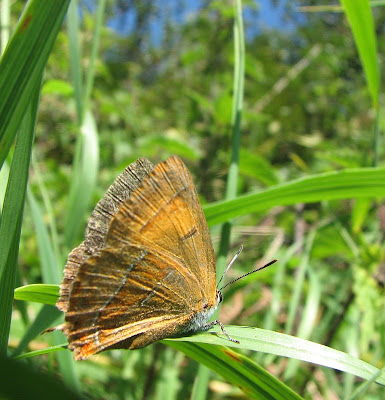 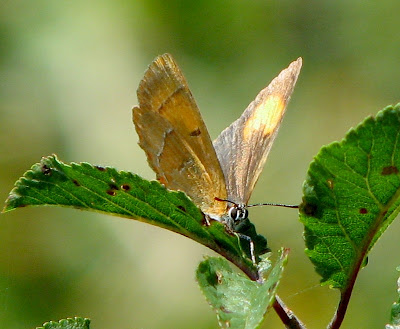 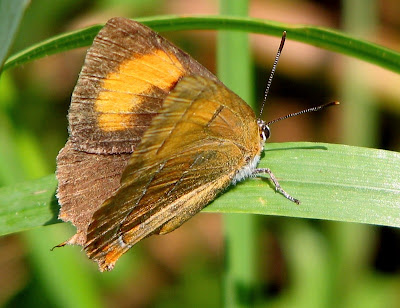 A lovely butterfly, well worth the effort.

On one occasion she was basking in the sun nicely, but there was a small sprig in the way of my camera so I reached up to just quietly push it to one side. While I was doing this she moved, but didn't fly off, instead she landed on my hand!! She stayed put for quite a while too and I was able to get a photo of the 'never to be repeated' (I suspect) event. :-) 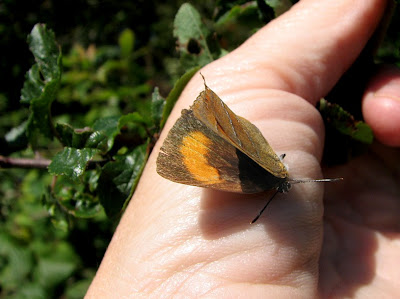 Worth two in the bush!?

As we were leaving George said something which summed up one of the pleasures of twitching (and birding on the whole I suppose). He said " Do you know Mum, if we'd got here and seen the butterfly straight away I'd have just thought 'meh' but because we'd been looking and waiting for so long, when it finally appeared I thought,'yes, wow!" I'll have to get him out of his room more often he might get hooked. :-)

On Wednesday night Bun set up the moth trap for the first time in weeks, the weather was probably too cold though and the catch was small. There were two new moths for the garden though, a Green Carpet (too faded to be worth photographing) and a couple of Light Emeralds. This one was really fresh and quite exquisite. 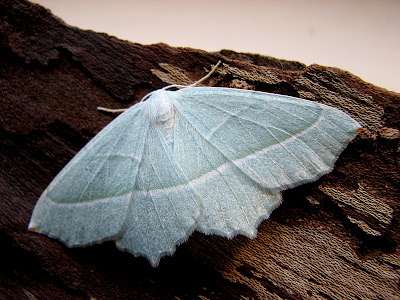 Posted by Karen Woolley at 9:53 pm

A cracking butterfly, Karen. Well captured.
Regards George : it sounds like there`s a naturalist in the making.

A great experience with the Brown Hairstreak, Karen - I'd love to see one of those.
The Light Emerald moth has such a beautiful hue and texture.