I started off today with a look at the sea, it was rubbish and I only stayed 15 minutes or so. Then it was off to the Farm Gate to see if Colyford Common was worth a closer look and also to look for the elusive Cattle Egret. You know the one that's been on patch now for over a week and I still haven't clapped eyes on it!! Well that didn't change this morning and it remains elusive to me at least! I hadn't really seen much of interest and had resorted to looking at the Egyptian Goose (pretty desperate I know) which actually paid off handsomely because as I was following it flying south with my scope it suddenly veered off and I lost it. I scanned back and forth with my scope and what should cruise straight into my field of view, a Marsh Harrier a superb adult female. I watched her hunting over the marsh and at the same time tried to send out a few texts. I know women are reputed to be good at multitasking, but not me!! Well not when it comes to texting and keeping one eye on a bird, because as soon as I looked away for a nanosecond it vanished. I didn't think it had departed though, it hadn't had time, it must have landed. I decided to stick it out and wait for an encore. Fifty minutes later I got one, Ian M also got to see it from the Colyford Hide. Steve had phoned me earlier and because he could see my car from Beer Head thought he might be able to see the Marsh Harrier too! I like his determined optimism!! I hadn't got my super-zoom camera with me, so foolishly had a stab at digiscoping it. It was a tad on the fast side. I got this blurry conglomerate of assorted shapes and colours, some of which vaguely resemble a Marsh Harrier, Well they do! Don't they? 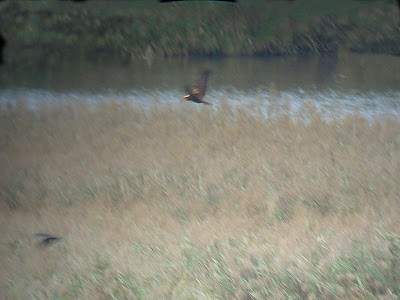 At 2:45 I was at home when Steve called, he'd seen a Sabine's Gull heading my way, he was at the Spot On (of course) and had seen it way off to the east. "You'd better hurry" he said. I did. I grabbed my scope, forgot my bins and ran, yes RAN to the yacht club. Before I'd reached the seafront he phoned again " It's heading up the river" I looked towards the river. I saw nothing. That's because it was directly over my head, lower than the yacht club roof, just metres away!! It flew around the boats a bit and then back to the beach and along the shore towards Steve, who was waiting to get the 'famous' photo! It landed on the sea close in but way to the west, I rushed down there to try and get a photo, having not had my camera with me earlier. It flew further out to sea though. After it had seemingly left I thought I'd go and sit in the car on the yacht club car park in case it came back. After all it had taken a couple of good looks at the river already. I set my scope up and started to look out over what was really a very quiet sea, a few Gannets were 'toing and froing', I wasn't expecting much if anything, and certainly not what I did see. Coming from the east and well above the horizon was a a Tern or Skua. As it got closer and lower and I could see it was definitely a Skua, I could also see it was definitely a LONG-TAILED SKUA! I say definitely because although I've never seen one it was so obvious!! It was an adult, it didn't have any long streamers but it did have an obvious black cap, white neck and breast, the belly and underwings were all dark and the upper wings and mantle again all dark, I couldn't see any white on the wings at all! It was very tern-like in flight too and slim. Just so-o different to an Arctic Skua! I tried to phone Steve without success, I got in touch Bun but he was too far from the sea and I knew Ian was on the school run. So single observer record I'm afraid. I'm absolutely sure it was one though. Unbelievable!! :-)

Obviously unbelievable, I notice it is already being considered 'stringy' as only my Marsh Harrier sighting as made it onto Birdguides this evening!! Oh, well it's only to be expected I suppose :-(

I had to go home and have a lie down, what a day! I'll probably not see another good bird for months now....
Posted by Karen Woolley at 8:26 pm