Not much in the way of birds to look at at the moment. Admittedly it hasn't helped that I've had a couple of massive lie-ins the last two mornings instead of getting out there and looking! What I have been out looking for though are Bears, the sort that live down in the local woods too! Firstly yesterday I went to Ox HIll Woods near Colyton because I knew that there was an area of ideal habitat within them, here it is: 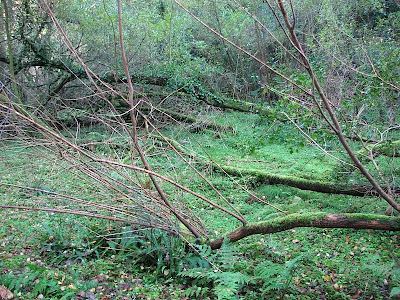 This is at the bottom of a steep slope and is in fact a bit of a mire. I sank almost over my wellies a couple of times. The kind of bears that I was looking for live in lots of wet places but especially in waterlogged moss. They are called Water Bears the scientific name is Tardigrada, which translates to slow- walkers and with four pairs of stumpy legs with claws at the ends and a slow lumbering gait they do look like microscopic bears!! I think (with a little imagination) they look a bit like Haribo 'Gold Bears', really cute!! I really wanted to find one of these little beauties, not having seen one for donkey's years. Here's some amazing facts about them from a web page:

Tardigrades are a fascinating group, and have an ability to withstand extreme conditions in a desiccated barrel-like form called a 'tun'. In this form they are one of the most resilient types of animal known. Temperatures as low -272ºC (i.e. almost absolute zero) or as high as 151ºC; X-ray radiation 1000x times the human lethal dose; high vacuum - conditions are all taken in the stride of the not so humble water bear. They have been proven to survive dessication for over a decade and recent research has notched up another feat of endurability, apparently they can withstand 6000 atmospheres pressure, which is nearly six times the pressure of water in the deepest ocean trench.

Here's a close up of their preferred habitat. It's not surprising that they are also sometimes called 'moss piglets'. They're in there somewhere and it's going to take much patience to winkle them out. 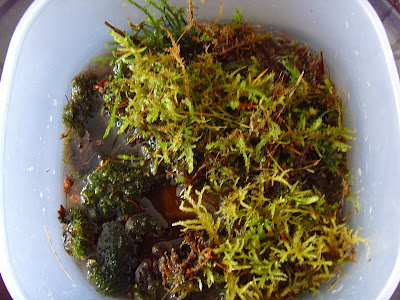 After many hours of looking, and burning far too much midnight oil, I eventually found a single one but before I could take a decent photo I lost it! Not that difficult with something one tenth of a millimetre long, believe me!!

While in the vicinity of the River Coly I popped down to Heathayne Lane hoping that the Hornet's that were around there last year would be back again. They certainly were with around a dozen or so milling around. I waited for a photo opportunity and one individual eventually obliged posing beautifully in the gentle autumn sunlight and I'm really pleased with the result: 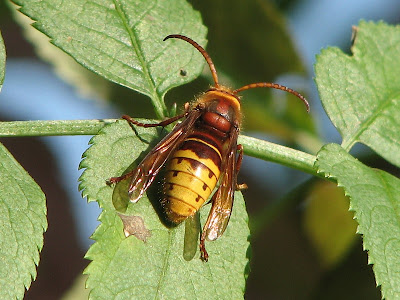 Along the Coly there wasn't much bird activity except that I could hear a Green Sandpiper calling. I couldn't locate it though and quite frankly it wasn't worth trying, with the dog in tow I wouldn't get within 500 yards of it anyway!!

Today I had a second attempt at finding and filming a Water Bear. The woods at Colyton had been a disappointment, I needed to look elsewhere. I decided on Shute Woods, there are always loads of wet mossy areas there! Shute Woods are slightly different to other local woods in that apart from being truly fascinating in their own right, they also have an historic building in them and here it is: 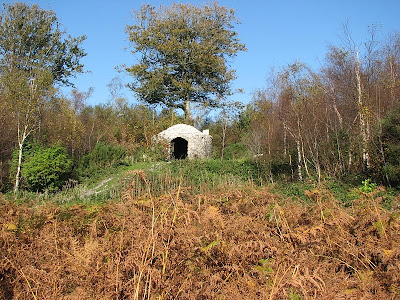 Shute Beacon House
I can't be bothered to tell you all about it but you can read it here (if you enlarge photo): 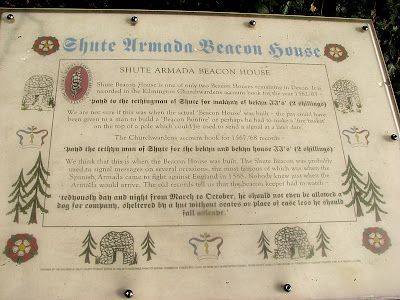 Poor beacon keeper, not even allowed a dog for company eh... (you'd know that if you'd read it) that makes me one up on him then. Here's the view the beacon keeper would have had, if you imagine no trees in the way that is. Oh, and he wouldn't have the dog in it either would he?

Unfortunately the sun was too bright to allow the distant view to be visible in this shot so here's one showing it: 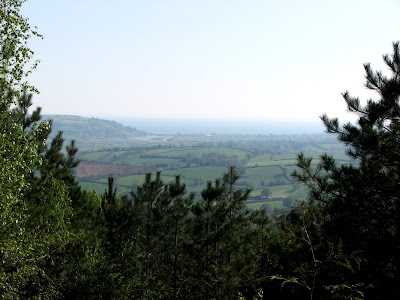 View from Shute Beacon of Axe Estuary and Seaton Bay

There were plenty of the usual suspects in the woods bird wise and 2 flyover Lesser Redpolls were slightly noteworthy, I suppose. The moss I collected from here was far superior to the Colyton rubbish and was literally teaming with tardigrades, I found one within the first hour!!

So whether your itching to see one or not, after all the effort I've put in, I'm going to show you one anyway and here it is!! The Water Bear:

Posted by Karen Woolley at 7:38 pm