Then There Were Two

It appears that I am even more observant than I thought because yesterday I didn't notice that there were in fact two Black Redstarts on the Trevelyan Road rooftops, the other one being a gorgeous adult male. I had planned on getting up early this morning to look at the sea but managed to fail miserably again. When I did finally drag myself out I saw the male Black Redstart almost immediately; on my own roof too!! It appeared to be spending a lot of time on the next door neighbour's roof, giving me a great oppertunity to digiscope it from my bedroom window. The weather conditions were not exactly ideal, but I tried anyway, coz you never know it may not be around much longer, it could move on, or something worse!? More on that in a mo....

Here are some of the 'stunning' shots I managed to get, he really was a stunner, just a shame about the dull weather. 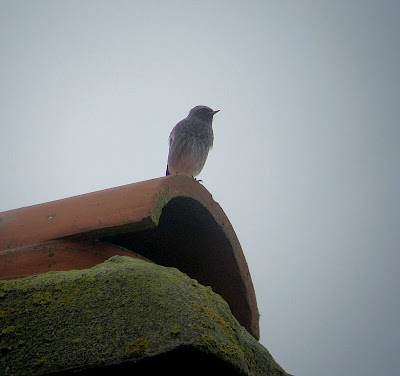 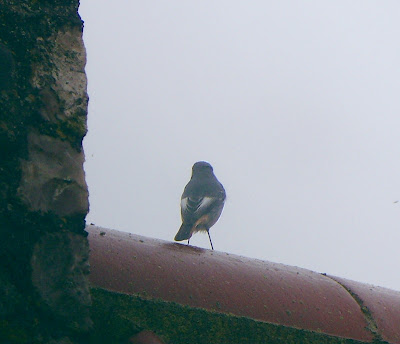 Err.. Back View (worth seeing I think) 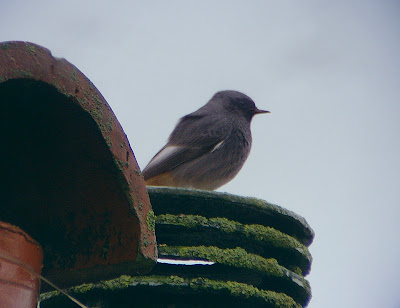 He really is very nice! 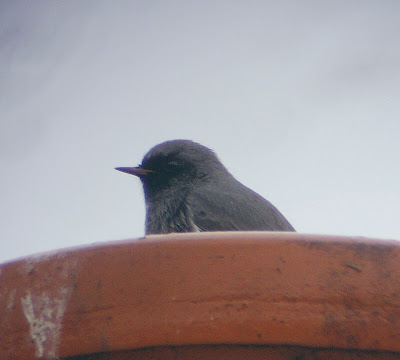 That's right hide!!
Why hide? Well because while I was admiring this lovely little chap, this lovely big chap arrived on the scene. Here he is : 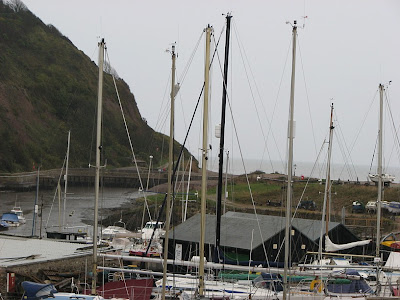 Waiting for lunch
It was a Sparrowhawk. Can you see it in the picture? It's right in the centre halfway up the gold coloured mast. I was a bit worried that one of the Black Redstarts would be on the menu, because they tend to be rather conspicuous when they flitter about on the rooftops. The hawk stayed put for ages surveying the boat park for a quick snack. Fortunately the Black Redstarts and almost every other bird sensibly made themselves scarce, leaving me to digiscope the Sparrowhawk, and here he is: 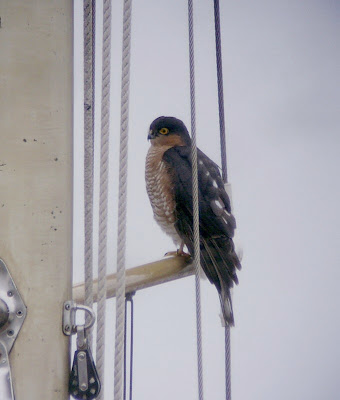 I spent the last hour or so of daylight down at Colyford Common with Gav, we were hoping to see plenty of Gulls and Egrets passing but didn't. There were a couple of Green Sanpipers around and a possible Water Pipit had a little fly about before landing, very frustratingly, out of view. It was also nice to see (well hear) several Water Rails in the new reedbed, it would be nice to see them nesting in there in the not too distant future. When the Tawny Owls started calling we guessed it must be time to call it a day. Totally dark by half past five!! Winter's well and truly here.

There was an awful lot of tram activity tonight too. A kind of 'rush hour' of sorts. One tram coming from Seaton stopped. "Strange" we thought. The driver got out and climbed onto the top deck to adjust the, erm, er, 'thingy' that attaches it to the overhead powerline. This it transpires was so that it could reverse, because shock! horror! another tram was coming the other way!! What high drama. We were literally only a matter of hours away from seeing a high speed tram crash!!
Posted by Karen Woolley at 6:50 pm