Brightening up a Dull Day

It continues to be uneventful in the backwater at the moment, to give you some idea of how slow the birding has been, yesterday my highlight was, wait for it!!... 123 Pied Wagtails at Colyton 'waste water treatment works' (which is the PC way of saying sewage farm these days), I was obviously bored to have counted them, no?

This morning I went down to Colyford Common at high tide but it was all much of a muchness again. I didn't think it would pay off to take Rex for his walk up on Axe Cliff either, because while at Colyford Common the wind began to get up somewhat and it's far from the best place to be when it's windy. So I resorted to my old faithful spot, Morganhayes Woods. It was dreary and trying to rain when I arrived, almost dark in fact. I thought about taking my scope in with me, just in case the Crossbills put in one of their erratic appearances but experience has taught me that they NEVER show when I take it along on the off chance. So I didn't!

The trees were 'almost literally' dripping with Goldcrests today, migrants no doubt, and their euphonious little calls filled the air. They were soon interrupted and overpowered by a familiar 'chupping' as several Crossbills obligingly flew in. The two males perched in the topmost branches of a spruce, not feeding, just posing! I could almost hear them saying "Who wishes they weren't too bone idle to carry their scope now eh!?" Pants! I whipped out my faithful old S3, it tried it's best but it was just too dull and overcast to get anything less than mega-naff. Like so: 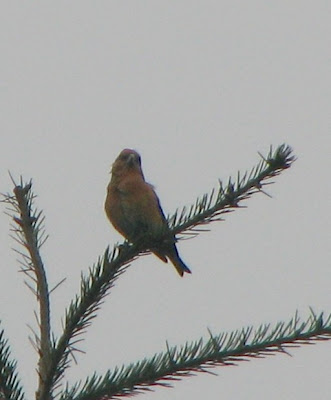 Nafftastic!
I wasn't going to to stand there and take their mockery, my scope and camera were in the car waiting, and it was only 2oo metres or so away. I got to thinking, that's not so far, Usain Bolt can run that in 19.30 seconds, so it stands to reason I could easily run there and back before their little bird brains even have chance to think about flying off!! The run to the car went well, the run back with my scope..... Well, the less said the better!! When I arrived back, all 'rosy cheeked' and invigorated, they had indeed not even had time to register my fleeting absence and were still sitting there as smug as ever. I hastily took some snaps, then I realised I'd left the white balance setting on sunny and it wasn't sunny, it was almost dark!! Doh! I fumbled around a bit more and just managed to get a few shots on the correct setting before they said. " You've had your chance loser, were off!". As they flew I counted 7 of them. They could be passing migrants I suppose but the flock size and make up was much the same (adult male, young male, females and juvs) as on the previous occasions I've seen them. So I'm leaning towards them being a long-staying family group.

Here are the hard earned photos. The first two I had to lighten due to the white balance error. The second two are a tad brighter (they look a bit better enlarged) but even so, still not exactly surfbirds material, I wish the sun had been out!! You can see just how intensely red the male is though!! In the first one he's looking straight at me defiantly, but I think he looks a bit like a red Orville (if anyone remembers Orville): 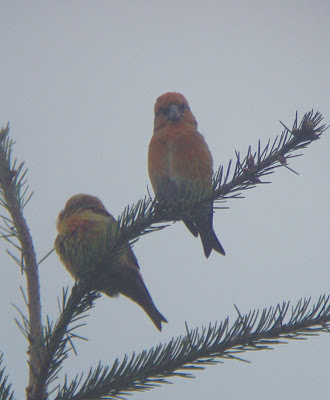 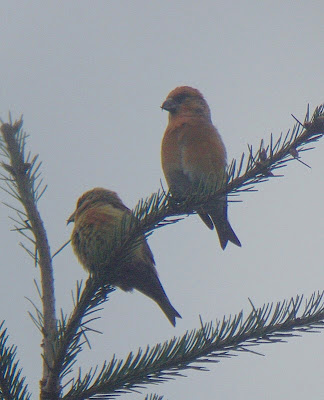 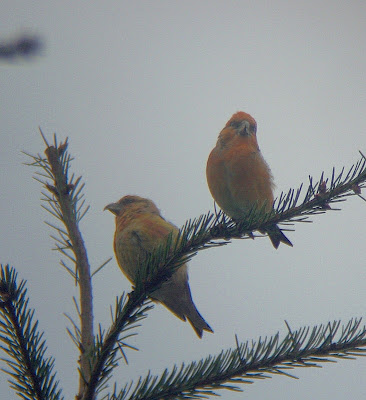 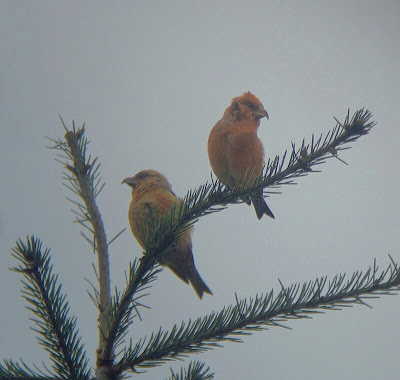 I know they're not exactly rare or exotic but they certainly brighten up a dull day!! :-)
Posted by Karen Woolley at 5:04 pm