Firstly, on Thusday last week I visited Beer Head first thing in the morning, I saw nothing much of note, except I did see what was most probably my last House Martin of the year! Meanwhile, Steve had elected to go vis-miging on Axe Cliff and was quite successful. Here he is in action (he is there honestly, reading glasses probably required!). 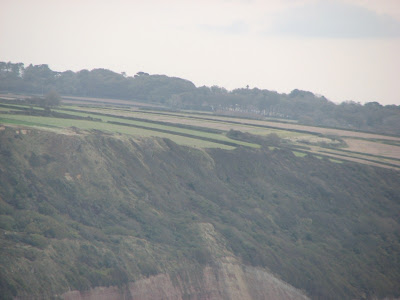 Friday I only had time for a quick walk in Morganhayes where I only saw 12 Crossbills (probably different combos of usual eight). Yesterday I decided to give Beer Head a miss and try Axe Cliff again, and where was all the action, yes Beer Head!! (Dartford Warbler and YBW no less!) There was some 'vis mig' but not in great numbers and to be honest I couldn't ID a lot of it anyway! A nice surprise was a late Wheatear, most likely my last of the year, and therefore my last chance for ages to add one to my blog photo tally. It will be Wheatear number4. It's very bad indeed, but it has to go on, so here it is: 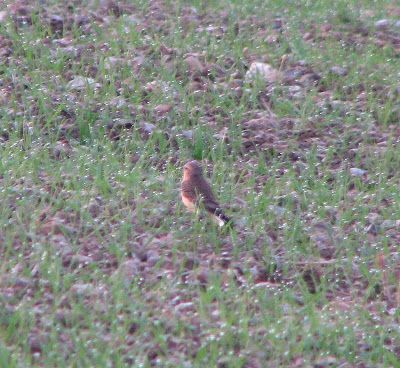 Number4
The sun was just rising as I made the cliff edge and river mist was rolling out to sea like so: 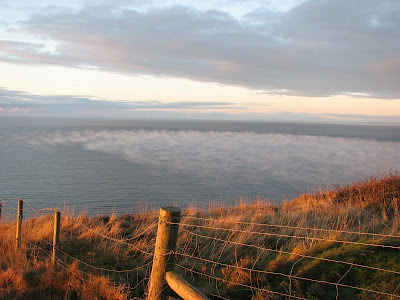 While standing here I got another easy golf ball tick (golf ball list now 22!!) It was just lying on the grass in plain view but was totally covered in mud and looked as if it had been buried for years. I don't know who or what had unearthed it? It was a Maxfli Revolution - 'Multiplayer 100' I can't find any references to this particular species and must therefore conclude that it's another on the 'presumed extinct list'.

Just as I was leaving I got a call from Bun, Clive had seen a Yellow-browed Warbler by the holiday chalets in Branscombe. The location was even narrowed down to a particular chalet called 'Puffin', so should be easy to find. Not for me though! Because I had to go to the Town Hall to help on the Axe Estuary Ringing Group's stand at the Seaton Community Fair first. Here's a photo of our very prominent stand, being expertly manned by Doug and right alongside, the stand of the Axe Vale and District Conservation Society: 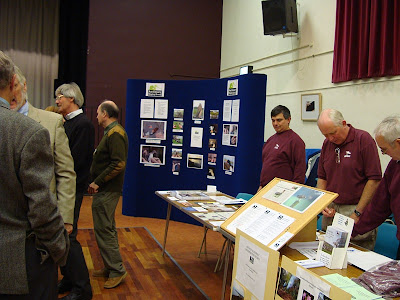 Seaton Community Fair
To Doug's left is Ian Waite, apparently often referred to as 'Steve's Dad', he's standing behind a fine display featuring a newspaper article and a superb Osprey photo! Being the modest type I wouldn't dream of gratuitously displaying my local fame and prowess as a wildlife photographer on my own blog now would I.... 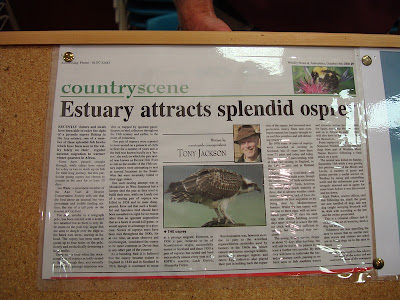 Published in the Pullman's Weekly News- What kudos!!

After I had finished my stint here I met Gav at Beer Head to go and twitch the YBW, Phil caught up with us at Branscombe too. If you've read Gav's blog you know the result, but it was an enjoyable walk non the less. Here's a nice photo of Phil and Gav on Branscombe beach looking for the YBW. 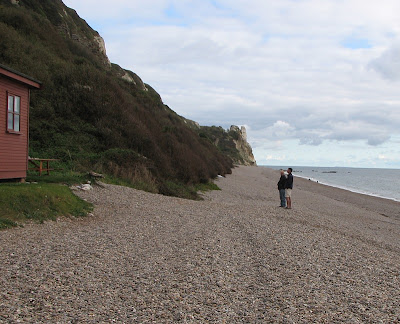 Looking in the wrong place!
We didn't have any luck here, especially as this was the wrong chalet, 'Curlew' NOT 'Puffin'.
We did see a lovely couple of White Wagtails though, one of them looked like this, albeit a bit less blurry! 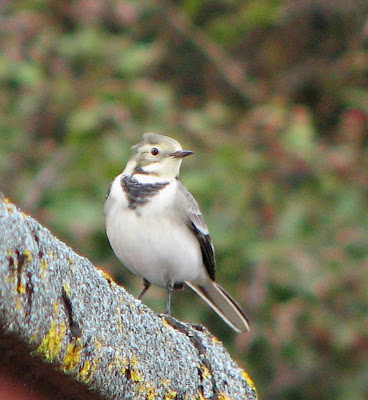 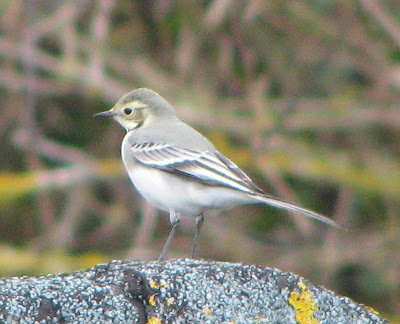 Bird of the day

In reference to my post title, why semi-successful twitching? Well, we did eventually find the 'Puffin' . Although it was a stonking great big holiday chalet it was none the less very elusive, skulking in the undergrowth, there was no Yellow-browed Warbler in attendance. Here's a typically dodgy 'record shot' 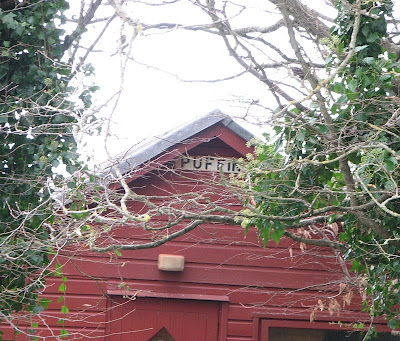 The Elusive 'Puffin'
The low air pressure was allowing superb visibility out to sea and amazingly clear views of Portlad could be had from many vantage points along the coast path. Here's a picture of the northern part of the island taken from Branscombe. You may even be able to see a Short-eared Owl (or better) circling over the lookout!! 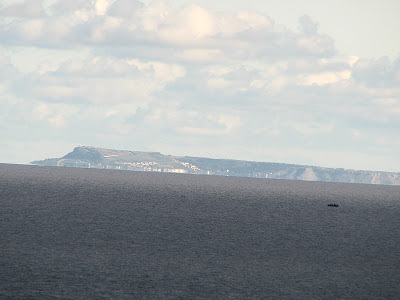 Finally while walking through the chalet/caravan park on Branscombe undercliff we saw a familar looking site and couldn't resist an attempt at recreating a familar tableau. If you have been a regular reader of 'Backwater Birding' you may recognise it!! (if not take a look at Steve's Blog HERE (post no2)) It must be said Phil was quite reluctant at first, for some reason he thought people would think we were nutters!! Look for yourself. What could be more normal behaviour than this!? 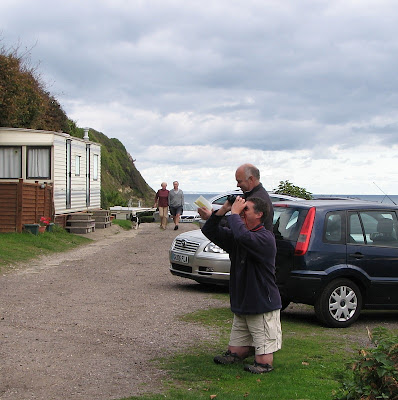 In fact we were in the wrong spot, because in the original scene the backdrop was cliffs. The correct place, I think, is just along the track a bit by the silver Volvo, just behind that very puzzled looking couple and their dog!

Anyway I decided to try and make it look more authentic by importing some of the original background elements and aging it by changing the colour, like so: 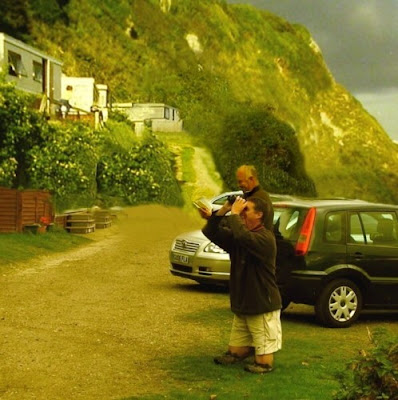 Easily as much fun as Yellow-browed Warblers!! :-)