A Pectoral Sandpiper Sneaks In

After most of what had been a fairly quite day had passed, (you know nothing much, just the odd Cattle Egret (which I missed again) and two Ospreys) I was in work for a course/presentation learning how to ' Live the Brand' and therefore almost comatose when my phone rang, whoops!! I quickly pressed ignore, but to no avail, because soon after, not one, but two text messages came in, it had to be something good!! It would have to wait though because I kept my entire attention on 'the brand' Yeah right!! As soon as I could escape I was greeted by Steve, yes, we both work in the same place, "Did you get my text" he said. He'd seen that I was on the course, I obviously didn't realise that bird gen was allowed during staff training!!! Anyway the bird in question was a Pectoral Sandpiper, it was tucked away in a quiet corner of Colyford Common and had been spotted by Fraser, our East Devon Reserves Manager, the phone call had been from him, which is strange because I didn't think he had my number. I'm glad he did though. I arrived at Colyford where a small twitch was in progress and got superb views, eventually, when the bird emerged from behind some Juncus, which had recently been conveniently trimmed back. Here are some photos of the bird, I took hundreds to get these few, most were rubbish as my camera insisted on focusing on the grass. 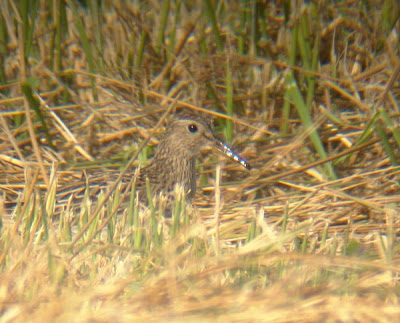 This is the best view we had for a long time.

But after a while, bravado set in and it came out and posed beautifully in the open, though just moving about enough to frustrate digiscopers immensely! 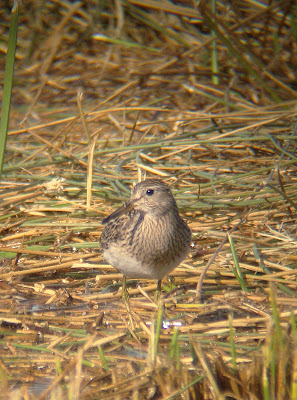 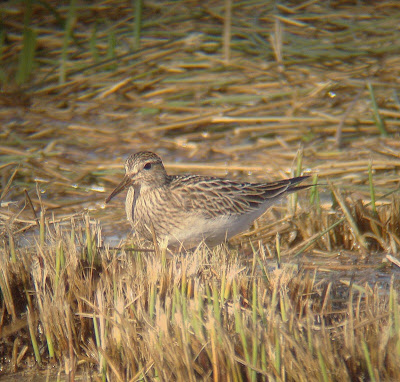 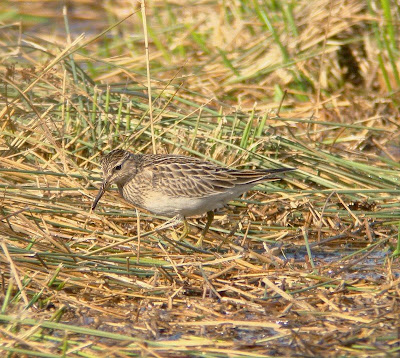 I stayed with the Pec Sand far too long and had to go to work without me tea again! I'll be eight stone wet through at this rate!!

Earlier in the day I was at Morganhayes again for walkies, I saw one Crossbill go over, it would be a real treat to see them come down from the treetops to drink, like one lucky Backwater Birder did yesterday. I reckon I'll be tempted to carry my scope on future visits just in case. While in the woods today I collected some water from a small pool on one of the tracks that I know has been in situ for around a year now. I thought it may harbour a few microscopic goodies and it did! I'm going to bore you with some pictures of a few of them. Now that I know I can micro-digiscope them, there's going to be no end to them I'm afraid!!
This first one's another Water Flea not a Daphnia this time though. I think this one's called a Chydorus sphaericus an acid tolerant species. 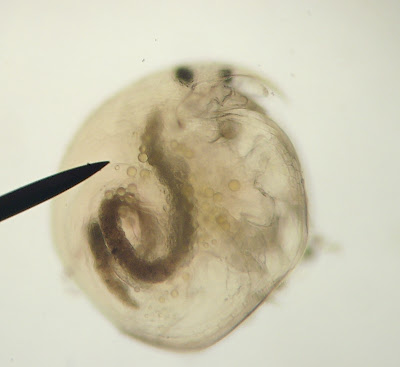 Water Flea
This next one's interesting, well I think so anyway, it looks like a worm or leech but it isn't. Even though it's large enough to see with the naked eye, it's actually one cell!! A Ciliate, which is a unicellular protist ( a protist being neither plant nor animal nor fungi) This one's called Spirostomum ambiguum, one of the remarkable things about Spirostomum is the way it can contract. The organism can contract it's body to 1/4 of it's length in 6-8 millisecs which is the fastest contraction known in any living cell, apparently! 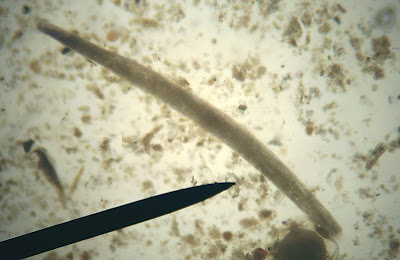 Not a worm
This one is a worm, a flatworm and also in the picture, an algae some of us may remember from A level biology, yes, it's Spirogyra! 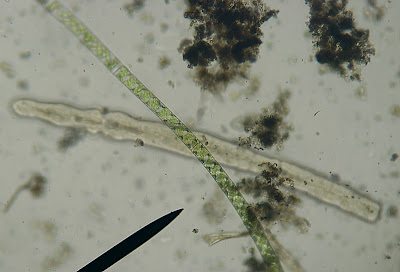 Because Spirogyra is so intricate and beautiful here's a closer view: 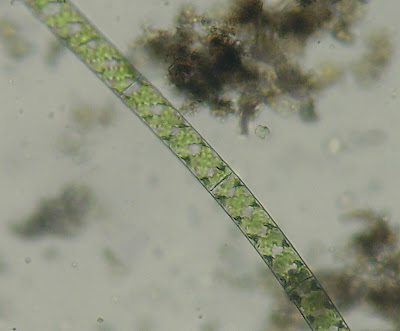 A reminder of biology class, I can't remember the parts though, oh perhaps I can, one anyway, the green bit's the chloroplast.

And finally, this little green 'banana-y thing' is a Desmid called Closterium. "What's a Desmid?" I don't hear you ask! Well it's another type of algae, most are unicellular, and are divided into two compartments separated by a narrow bridge or isthmus. Desmids assume a variety of highly symmetrical and generally attractive shapes. There are more than 5000 different species, so you may be seeing a couple more... 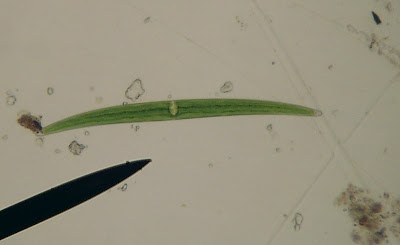