A Small Fall of Stonechats

It was lovely Beer Head weather this morning, but circumstances conspired against my getting there. I was all ready to go either to Beer Head or indeed Axe Cliff (for a change) when I realised I had misplaced my keys. This is not an unusual occurrence in fact it's getting worryingly regular, so I wasn't too concerned at first. After the first hour of searching I began to get slightly vexed. Two hours later, they turn up, they are in Martha's school bag in Axminster!!! They'd fallen into it from the kitchen table! Fortunately during my assiduous search I did find my spare car key at least, so was eventually able to get out and about. Yes I know I could have walked somewhere, it has been known!!

Anyway I had in mind a nice copse of sycamores behind Beer Caves, I thought it may be a good spot for a Yellow-browed Warbler. No luck with that, but along this hedgerow I counted no less than ten Stonechats between where I was standing taking the photo and the large tree. There may have been more further along it. 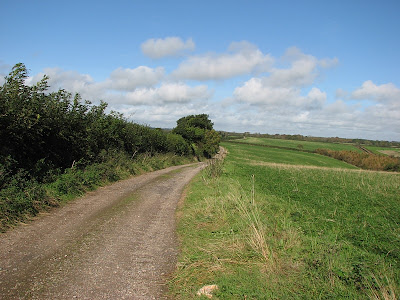 Most were eventually making their way westward towards Branscombe. I wonder how many were on Beer Head this morning? I remember on the 4th of October last year seeing 19 there, I reckon there may have been that many today too. I know they're a bit boring but here's a picture of one anyway: 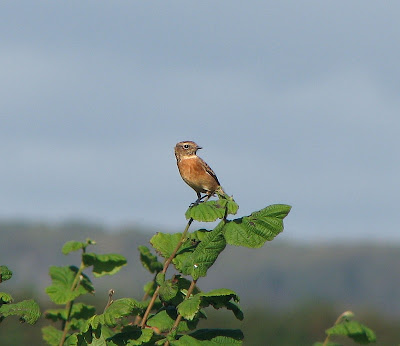 Talking of small falls, there's been one on the Scillies, of Red-eyed Vireos!! I mean, who wants to go all that way just to see a few American LBJs when they could stay on patch and see fantastic birds like this?....Yes, that's right .... I DO!!
Rex often can't jump up onto the sofa at home, poor old soul, but once out on his walk he's usually revitalised somewhat, here he is leaping over quite a high stile with aplomb!! 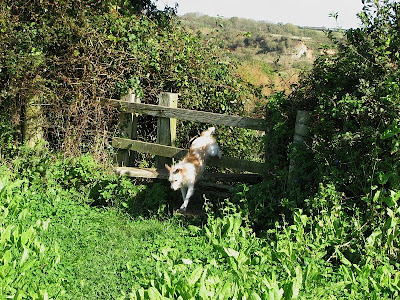 In the background of this picture you can just about see one of my 'favourite' places - Beer Quarry! Come to think of it, I don't like being at Kilmington Quarry either, even though both are disused. I fear that I may suffer from 'Quarraphobia'! The field that Rex is leaping into has been planted with Chicory, I think this is done to break up the soil, because chicory has a very large taproot. What it also has is one of my favourite flowers. They are a beautiful colour and look like this: 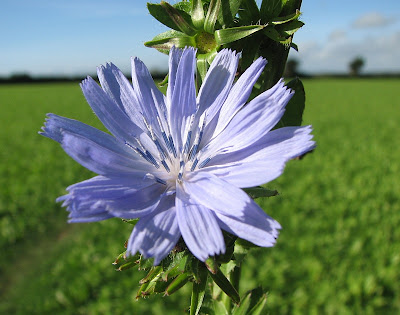 The Borrow Pit water I collected yesterday was rubbish under the microscope compared to the plenitudinous microscopic life in Bruckland Ponds' water.

Here are a few more bits and bobs I've found: 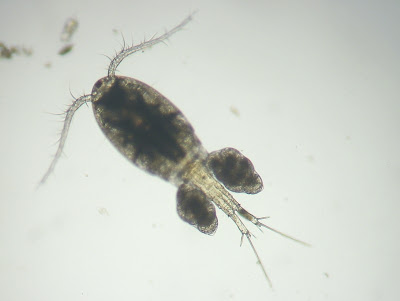 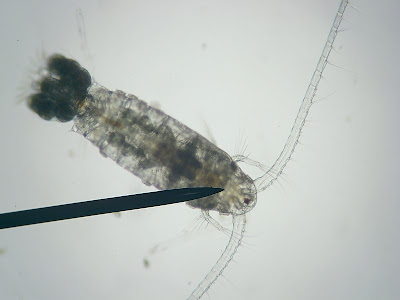 Diaptomus like cyclops is a copepod, it is characterised by it's stupendously long antennae, longer than the whole body length. I couldn't get them in the picture. If you look really closely at the picture you may be able to see lots of small disc-like shapes along it's sides. There's one between the antenna and leg just below the end of the pointer. These are another organism (I don't know what) living on the surface of the Diaptomus. They were 'running' around the outside edge really quickly, reminded me of little cars going around a Scalextric track!! But them I'm weird! I'll have to try and video this if I see it again. 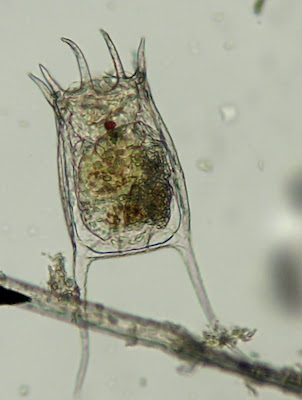 And Finally I attempted some video footage through the microscope, This is Euglena, it's a medium size flagellate protist with very plastic body. It has green, ovoid chloroplasts, and a distinct stigma (a red "eyespot") in the anterior end. They are usually around 60-120 microns in length. This video is at magnification of 400x. I think it may just win first prize for the most riveting video on a blog ever!!