After yesterday's scintillating day on patch I decided to pop to Plymouth this morning to see the Woodchat Shrike, which has been there for a few days now. Call me bonkers but I'd much rather see one of these than a Collard Flycatcher any day. It would be only my second ever Shrike too. Bun hadn't seen a Woodchat Shrike before either, so came along on what would be his third twitch of the week!! The bird was in Ford Park Cemetery, which is huge. When we got there, there was a man dressed in day-glow safety gear, strimming. 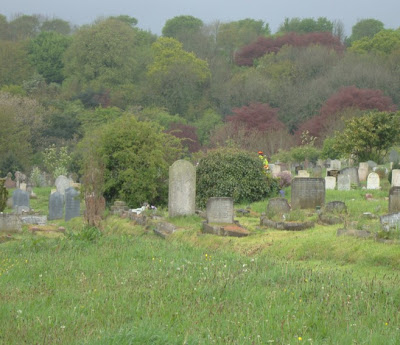 You can just about see the guy strimming on here, although he's half hidden by a bush. Almost as soon as we arrived in the cemetery we could here a Cuckoo calling, our second of the week! It was somewhere in the big trees in the background of this photo, but we couldn't see it, as usual.

We thought the disturbance would put paid to our chances of seeing the Shrike, but on the contrary, it was hanging around near the man and grabbing the insects stirred up by the strimming. It was a super little bird, real 'value for money' and almost always in sight, posing on one or another of the gravestones and monuments. I took a couple of snaps and some video footage of it, like so: 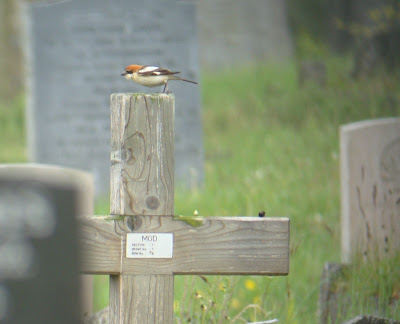 Not one of my better photos but it shows the beginnings of the bird's little' larder' on the arm of this cross. I don't know what the little pale object is but the black one is a Bumblebee, which we saw the bird catch some distance away and bring here. 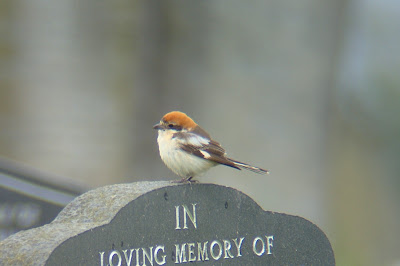 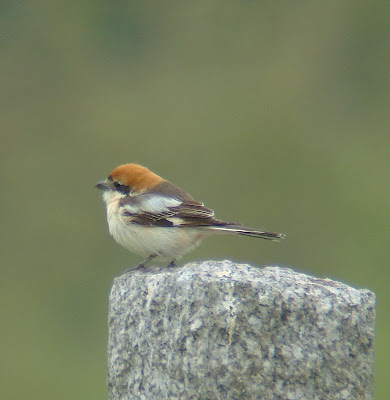 A bostin' little bird in a typical pose, or two.

Turn the sound up on this video and in the second snippet you'll hear the Cuckoo calling.

When we first arrived at the cemetery we were walking around and along the rows of gravestones eagerly scanning for any sign of the bird. This brought to my mind a famous scene from the film 'The Good, The Bad and The Ugly' . The scene where Tuco (Eli Wallah) runs round and round the Sand Hill Cemetery frantically looking for the grave marked 'Arch Stanton' to the soundtrack called 'The Ecstasy of Gold' by Ennio Morriconi. I have a copy of this soundtrack so couldn't help making this little tribute video. Hence, I bring to you...

'The Ecstasy of Woodchat Shrike'


This afternoon I again tried for, and this time actually saw the Whitford Lesser Whitethroat, and got this photo too. I told you to watch this space! Shame it was raining though. 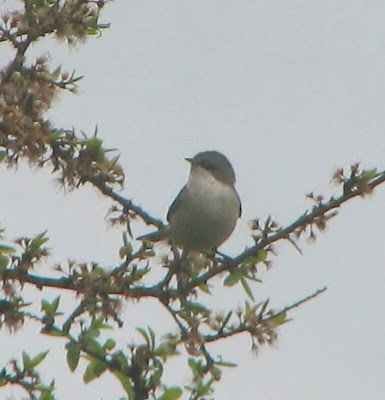 Stunning birds those Woodchats - I'll swap an east to see Cuckoo for one of those. Loved the vid too with one of my favourite pieces of music.

That should be an easy to see Cuckoo - lazy typing!!

I must make the effort to go to Dartmoor where I hear that Cuckoos are not that difficult to see . I'm envious of your seemingly easy Otters and Eagles as well! Some nice photos coming from the new super zoom camera too. It's great to hear there's another fan of Ennio Morrriconi out there! :-)