My early morning alarm call was a text from Ian M telling of a Pied Flycatcher on Beer Head. I wasn't in too much of a hurry to get up there though so leisurely made myself a cup of tea, and generally loafed around a bit. Twenty minutes later another text from Steve (which I'm really pleased he bothered to send) was enthusing about a 'CMF' (if you don't know what that stands for, please don't ask; look in Bill Oddie's 'Little Black Bird Book') I nearly choked on my tea as I realised that that meant, it must be a MALE!! I'd never seen a male Pied Fly before (a visit to Yarrner Woods just hasn't reached the top of my 'things to do' list yet) so I quickly threw on some clothes and rushed up there. I had made a bad choice of clothing, because once there I felt frozen in the bitter northeasterly wind. My mind was soon taken off this little inconvenience when I set eyes on the bird. What a little stunner! Gorgeous, and showing so well too. I wished I'd taken a scope along to try for a photo, I had got my S3 with me but it sulks and refuses to play when the weather's anything but sunny. I firmly insisted that it at least made some kind effort. It didn't try very hard I'm afraid, also the fierce wind prevented me from holding it still, hence much naffness ensued: 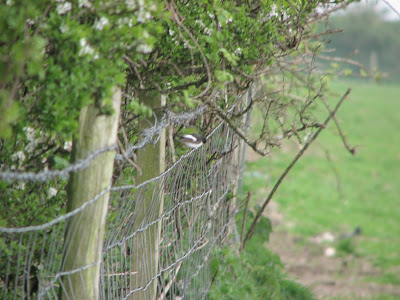 Almost all my efforts were as bad as this, however, I did manage to salvage something from one of them with some very drastic sharpening, just don't look too closely! You can see what a little beaut he was though! 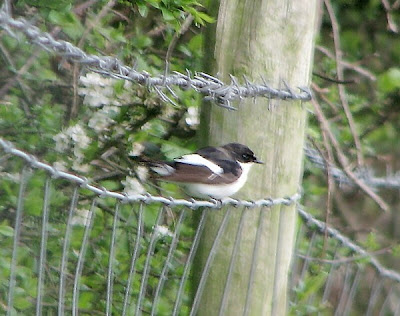 Later I went over to Beer Cemetery Fields, where Bun had seen the patch's first Whinchat of the year. This was a lovely male too and this time I'd taken my scope. Here he is: 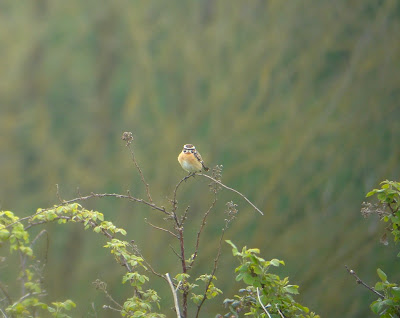 A nice 'complete with habbo ' shot. 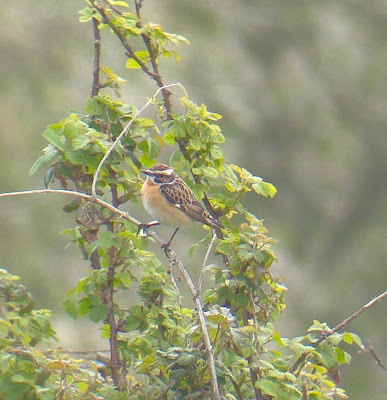 I've also seen two flyover Yellow Wagtails today and and whilst walking with Rex along the River Coly north of Colyton, I counted at least ten Sand Martins back at their usual nesting site, which was nice.

Twittering: The new gadget at the side of my blog shows my Twitter posts. I can make them from the computer or via text message when out and about. Great for if I haven't time to blog properly. So if you find it all quite on here, check out my twitterings. Well, if you like! :-)
Posted by Karen Woolley at 8:38 pm