After yet another long lie in this morning ( still trying to recover from Monday's exertions) I took the dog for a late morning stroll up on Axe Cliff. There was very little in the way of birds to see, I didn't even see the usual pair of Stonechats. In fact, if I was to say that the massive highlight was a couple of Swallows coming in off, then you'll probably get the picture. Even so, the weather was glorious and we had a smashing time. To start with it was surprisingly quiet and tranquil for a sunny day on an Easter weekend, but all that soon changed when the hoards of holiday makers started to appear. I get a bit annoyed when all my favourite places become inundated in this way but I do realize that this is a very selfish attitude and I'm certainly not proud of the way I feel. I should remember that I'm VERY fortunate to live here the whole year round and NOT begrudge people the pleasure of sharing it. Come to think of it, I'm pretty certain that some of the residents of the Scilly Isles will feel the same way about me, when I'm traipsing all over their local beauty spots come October. Actually if my pathetic efforts on Monday are anything to go by I'll be exhausted after the first day. We will be camping, so will have to carry lots of belongings around with us. I better start carrying my scope around everywhere from now on to get used to it. Anyway I digress. If I ever get my scope back from Nikon that is! ( I digress some more!)

I did see a few interesting things on our walk though. Firstly, while I was looking through my bins at something which probably wasn't a bird! Something crawled onto my foot, it was one of these: 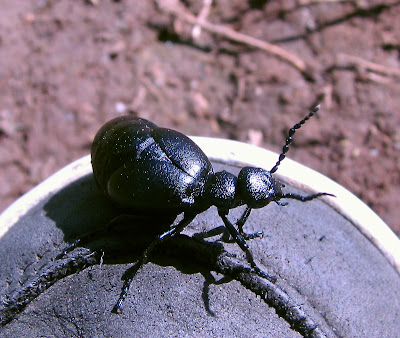 Female Oil Beetle.
There were a fair few of these around, they appear to like coming out onto the dirt footpath, probably to lay their eggs. There was a male too but he was staying in the grass, which proved to be very sensible as it happens. 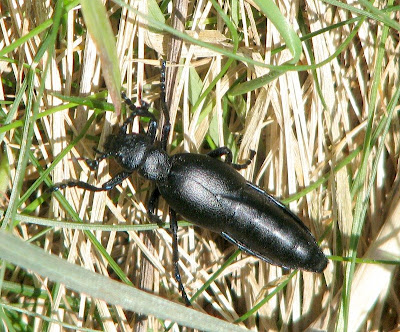 A male: The slimmer model of Oil Beetle.
Why sensible? Well because of the holidaying hoards, stomping along the paths, not really looking at their surroundings , this was unfortunately happening. 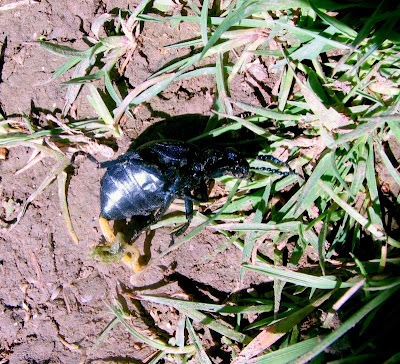 What a way to go - squidged
by a size 9 Gortex boot.

Because this was happening I was returning every beetle I spotted to the longer grass, hoping to save a few of them from the same unfortunate fate. While I was squatting down taking photos of these beetles, it brought to mind a passage I remembered reading in my blog's namesake book 'Wild Wings and Some Footsteps' Where our 'old friend' J Wentworth-Day extols the virtues of entomologists in his own inimitable way!

[Rare beetles and insects are collected assiduously by annual droves of earnest young men and bespectacled women, who arrive in flat-footed multitudes, to gabble priggishly in museum Latin over their collecting boxes, nets and sheets. They cannot call an English bird by it's English name, a grass a grass or a sedge a sedge. It must be labeled with jargon of the museum. A peculiar and irritating snobbery The local village which calls a spade a spade, and a Bittern a 'budleybump' lumps the whole pallid, precious throng under one generic heading - 'Bughunters'. But if can observe a bird, or a butterfly, or a fish, or water beetle, with pleasure; if you can see it as a thing of beauty and name it by it's plain English name, there is still hope for you.] 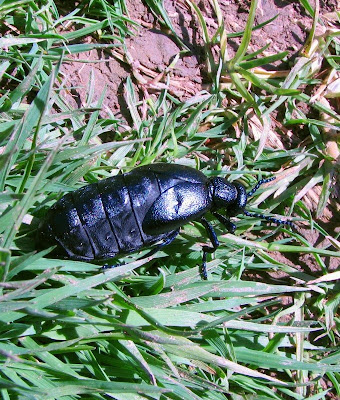 I admire entomologists, more power to their elbows I say! For they have studied seemingly boring beetles like this and discovered that their life cycles are so complex and bizarre you couldn't make it up!
Adult oil beetles, which live for about three months, lay up to 1,000 eggs in a burrow in soft or sandy soil and eggs hatch in the following spring. The young larvae are unusual in being very active and long-legged and are known as triungulins after their three claws.Once they have hatched, the young larvae crawl up on to vegetation, often lying in wait in flowers, where they hitch a ride on mining bees and are involuntarily taken back to the bee's nest.The triungulin then changes into a more maggot-like larvae and devours the bee's egg and also the protein-rich pollen stores that the bee intended to provide for its own larvae. Adults will emerge in the following spring, completing the life-cycle

I didn't make this up! Fascinating eh!?

I also saw a nice Speckled Wood like so. 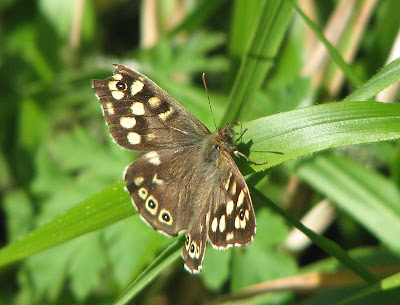 And some lovely wildflowers, I particularly like diminutive flowers, because close up they are often much more, intricate and beautiful than you'd think. Here are a couple of my favourites. 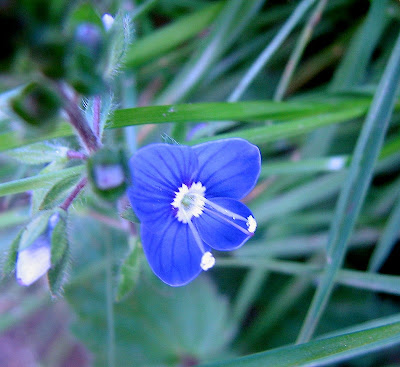 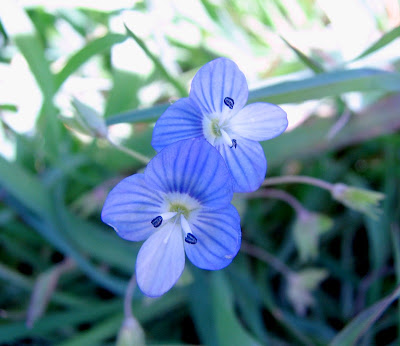 Common Field or Buxbaum's Speedwell (Veronica persica), in my childhood I remember we called these bird's eyes and if you picked them birds would peck out your eyes! We were very stupid indeed!
Before leaving I had a quick gander at the Slow-worm site hoping to see some other herpetological highlight and I did, this lovely Adder, only the second I've ever seen on Axe Cliff. 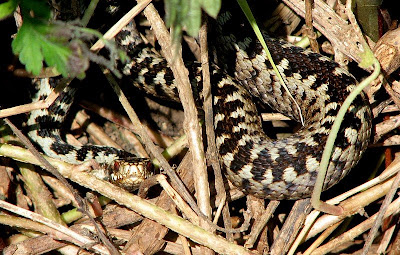 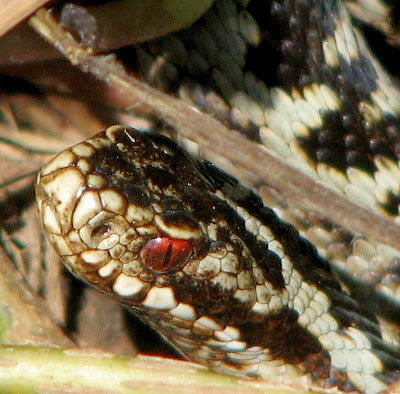 Posted by Karen Woolley at 8:51 pm