It's been a wet and windy couple of days on the local patch which means that quite a few waders have turned up. Yesterday I went down to  Colyford Common where there was a delightful selection of them on the scrape, it was just like the 'old days' i.e. Pre-Black Hole Marsh. There were two lovely Wood Sandpipers, a Ruff, a Little Stint, a Greenshank a few Dunlin and lots of Snipe and they were all miles too far a way to get any photos particularly as it was tipping it down too. Today Steve's seen stacks more waders, sixteen species to be exact, they've been spread around the valley mainly in the flooded fields but I haven't really had time to catch up with any of them. I did get out mid-afternoon just at the right time as it happened because no sooner was I out than I received a text from Steve who'd found a Juvenile Marsh Harrier hunting over Colyford and Axe Marshes. I joined him at the Farm Gate and we watched it for a few minutes before it landed out of view. It was my first Marsh Harrier this year although there's been at least one other on patch if I recall correctly. It was a bit distant for good photos but I managed couple of not so good ones. It appeared to be much nearer to Colyford Common hide than our vantage point so I went down there. I then saw it flying over the Farm Gate, so after a while I returned there only to see it flying really close to Black Hole Marsh and the Tower Hide. I relocated there.... It relocated to several miles east of Axe Cliff via the Farm Gate!! Oh well, you can't win 'em all! 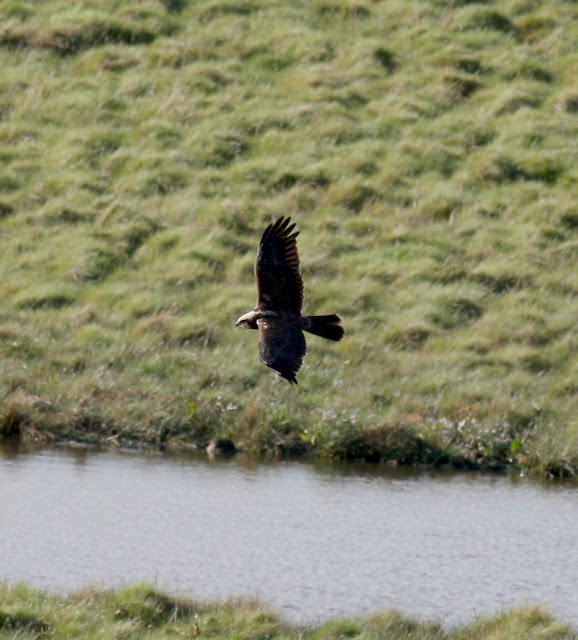 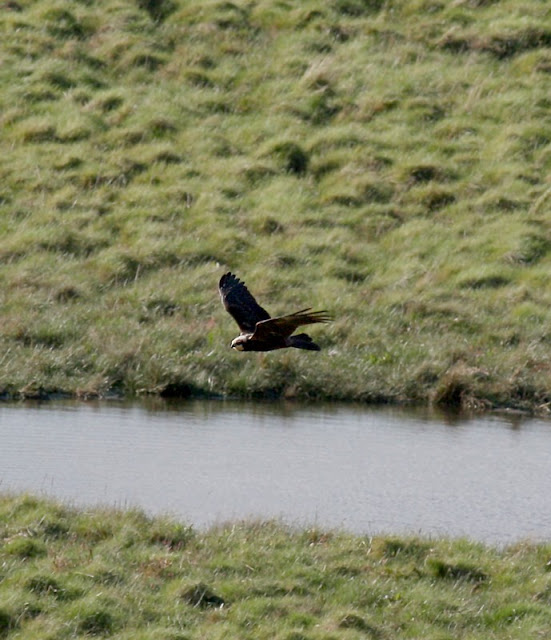 Marsh Harrier over Axe Marsh from the Farm Gate 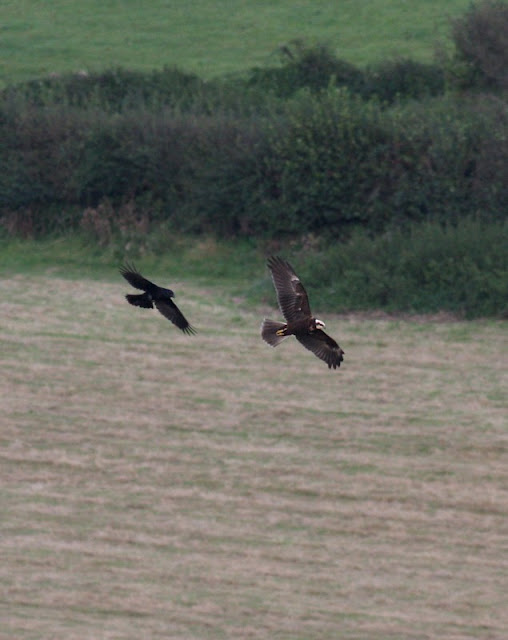 Distantly from the Tower Hide being mobbed by crows over the Farm Gate Field and eventually driven off east.

This Chiffchaff was fly-catching on the tramlines outside the Tower Hide. 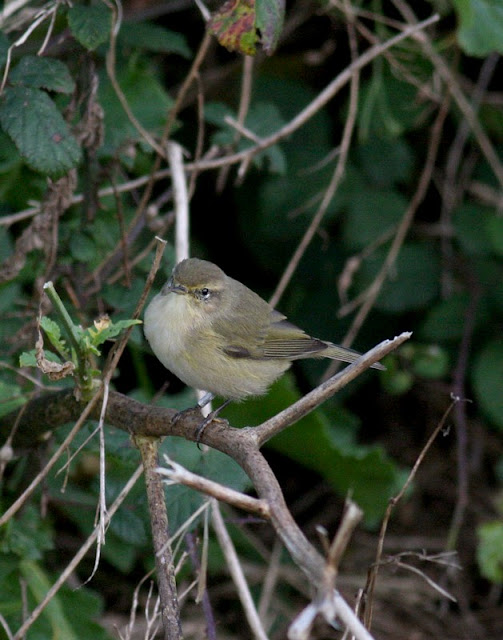 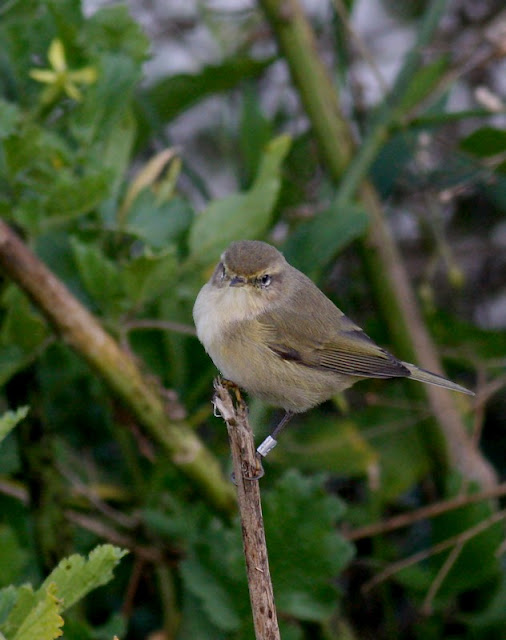 I wonder if it acquired the 'leg iron' here.
I don't know if the ringing group have been active recently.

So back to Sunday, and after I'd been looking at the waders on Colyford scrape I decided to go and have a look at the beach as the conditions seemed ideal for something like a Little Gull. There were some nice big waves but there were virtually no birds to be seen, there were several surfers though. Seaton isn't exactly known as a top surfing venue but in favourable conditions some nice big breakers develop just outside the harbour entrance. I decided to try and get some photos of the action and I'm quite pleased with the results considering it was gloomy, raining and I was taking them from at least 300m away in the car. I reckon I could have got much better results if I'd gone down to the water's edge but I was prevented from doing so because it was raining and I didn't want to get my camera wet. What other reason could there be? It definitely wasn't because if I'd stood down on the beach in plain view I'd look like a sad middle aged woman perving on the surfers! I mean, as if ...!! 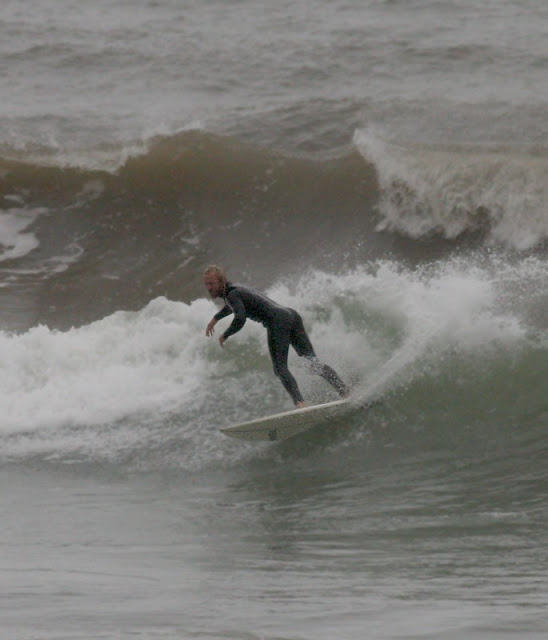 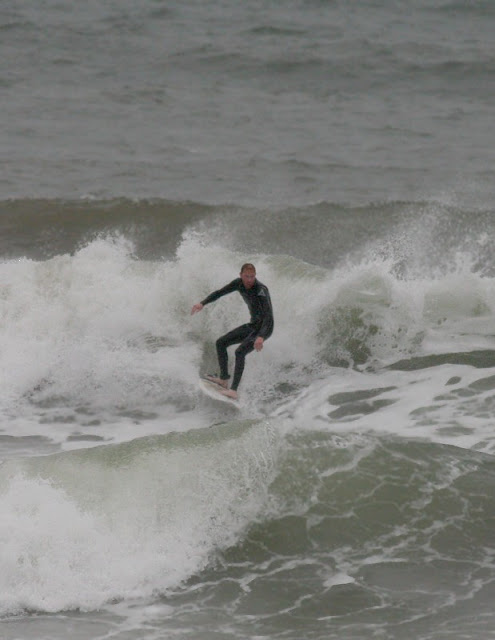 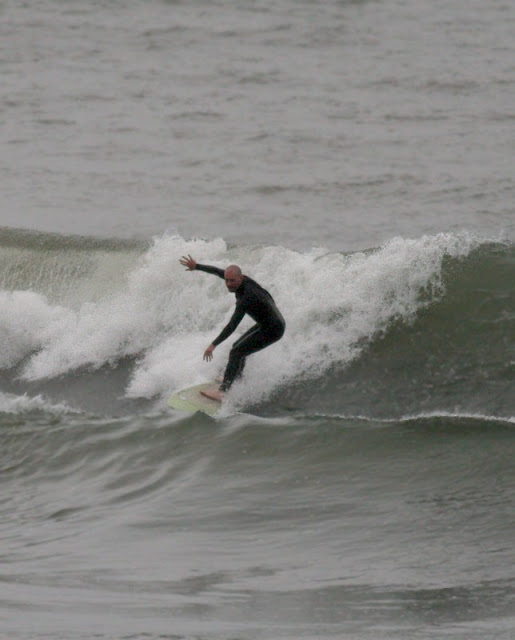 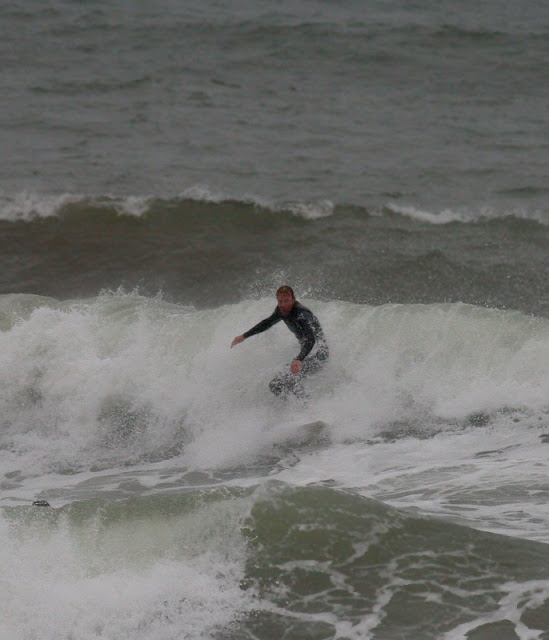 Phwoar!
Not quite on a par with a Little Gull though.

Actually what impresses me most isn't their surfing ability, it's their super-human ability to walk barefoot on the beach and across the yacht club car park. I can't even stand on the beach without shoes on! Perhaps it's just me though.