If I were to tell you my 'Birdy Highlight of The Week' was a Ringed Plover at Coronation Corner on Wednesday, you'll know why I haven't blogged since Saturday. Actually there was another highlight, also on Wednesday, which was ringing a Moorhen, caught in the Abberton Traps along with three Shelduck retraps. I was back out with the AERG this evening at Seaton Marshes, where we were 'whoosh netting' for the first time this year. We only had a small catch of 5 Shelduck and amazingly a massive 60% of them were fresh birds, that's three of them (just to prove what a great mathematician I am). Terry from the Radipole Lake Ringing Group had joined us hoping to get to ring a few Corvids, these stayed well away for the most part though, probably something to do with the immense Burmese cat that frequents Seaton Marshes, creeping about in the bushes overlooking our catch area.
Here are a few photos of the 'action'. Not very good quality I'm afraid due to the rapidly fading light, I resorted to flash on a couple. 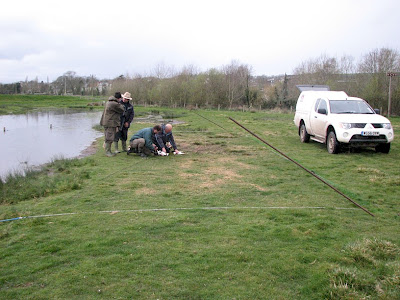 The small team only just outnumbered the ducks. 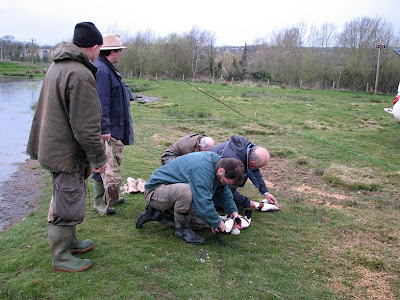 Fraser and Terry removing the catch.... 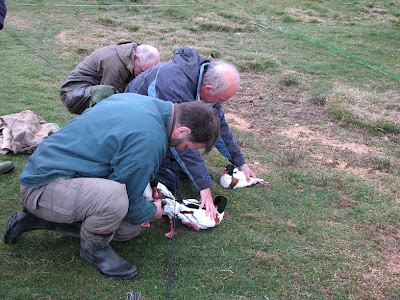 ... And a closer view. At the back is the only female we caught, I got to 'process' her (which incidentally means fit a ring, measure the wing, head /bill, tarsus and weigh her, not put her in a blender, which is what 'process' always calls to my mind) , she was very petite indeed, a real cutie. 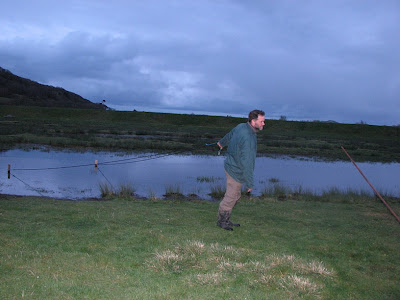 After processing all the birds we re-set the net so that those who hadn't seen it in action before could do so. Here Fraser's pulling one of the bungees into position. 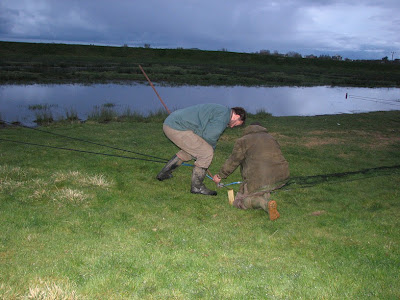 Securing bungee to the net and trigger mechanism. 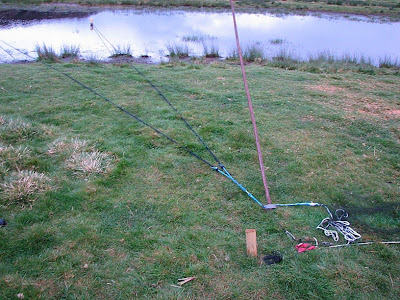 This shows one side of the net set and ready to go, when the trap is sprung the bungee pulls the net out and height is gained by the net being attached to rings which slide up the angled pole.

If that's not clear then take a look at this little video of it in action. It's fast, blink and you'll miss it! Have the sound on and you will hear the sibilant sound it makes, hence the name 'Whoosh Net'.

Posted by Karen Woolley at 8:45 pm