I haven't been out for long today after spending most of the morning in Exeter, but as soon as I got back I joined Nick, who was really keen to be shown the delights of Kilmington Quarry, and who better to show him than a self confessed quarraphobe! He was actually keen to see a Jack Snipe too, as was I obviously, but we'd really left it much to late and will just have to forget about one until next winter now.

After this I still needed to take Rex for a walk so decided to try my luck on Beer Head. Bun had seen three Wheatears here late in the morning and I was hoping they may still be around. Happily two of them were. I wanted to get a photo of them, the first Wheatears on patch this year, what a scoop that would be! I couldn't get very close though, possibly due to Rex's presence, but more than likely due to the overpowering aroma of Ralgex which has been accompanying me today, (my arthritis has flared up for the first time in eleven months) My scoop wasn't to be, however, because a while later I told Gav that the Wheatears were still showing well on Beer Head and naturally he popped up there to see them, and take some photos, which he's posted on his blog, they are much, much, MUCH better than my abysmal effort. Oh yes, you haven't seen it yet have you? 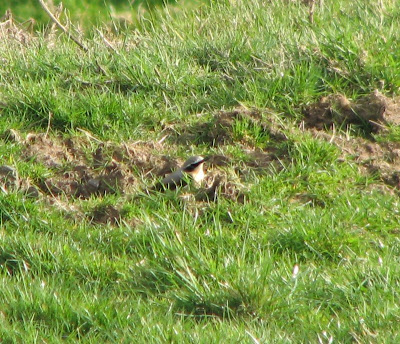 See! Abysmal.
Taken without the aid of a scope obviously! Note how he's crouching down trying to escape the noxious fumes!
The above photo is Wheatear number 5 of the 100 I promised to put on my blog when I started it in September, so plenty more to come, yippee!! I promise most will be better ( but not necessarily any more interesting) than this one, hopefully starting soon, as I have been lent a scope by someone who has kindly overlooked my reputation for clumsiness! A big THANKYOU, you're very brave! I WILL be careful. :-)

I did get one scoop though, with the first Adder of the year. I thought the fairly warm conditions may tempt one or two out today. I didn't have time to look in many of the usual spots but a regular spot in 'The Dell' came up trumps with this nice big female, there was also a Slow Worm here, unusually basking out in the open. 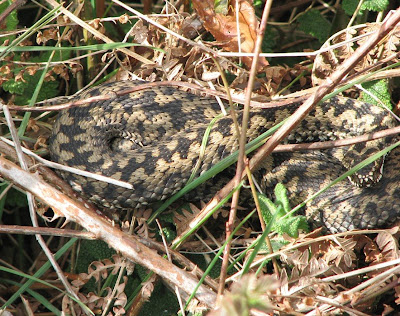 I've somehow managed to cunningly avoid all of the numerous Sand Martins seen on patch over the last few days...Tomorrow for sure.
Posted by Karen Woolley at 11:00 pm