I haven't seen 'much to write home about'* over the last few days, the cold northerly wind keeping me inside a great deal. I did venture up to Trinity Hill on Sunday morning and by doing so missed out on the spectacle of 2000 or so masochists running around a large part of our house, (The Grizzly- See Gav's Blog for full description) I distinctly remember the floor vibrating as they thundered past last year! I was a bit worried about the integrity of the plaster, so thought it best to employ the old out of sight out of mind tactic. Trinity Hill was as lovely as always, trees, heather, wind, trees and trees. It looks a bit like this: 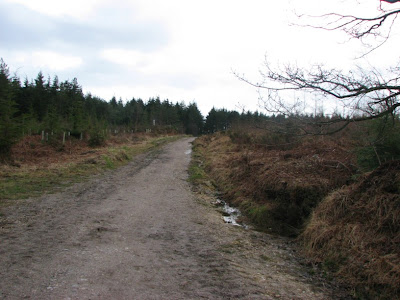 Just Heavenly...Well Rex likes it at least (note the trees!)

It wasn't all trees and wind though I did manage to see a small flock of Crossbills on two separate occasions, once in flight over this clearing (the one pictured above that is). There were six of them and they were all females/youngsters. I thought I'd seen exactly which tree they'd landed in but on getting there they were nowhere to be seen. I did get a superb view of a Woodcock though, which Rex discovered underneath a fallen tree, he flushed it and it flew right past me just a couple of feet away! Steve and I saw another Woodcock there today and Steve was quite relieved to hear the Crossbills 'chupping' too, (I'd wandered off and missed them) meaning he probably only has to visit once more this year to see Nightjar and feed the midges!

These two photos will make it all 'as clear as mud' I'm sure: 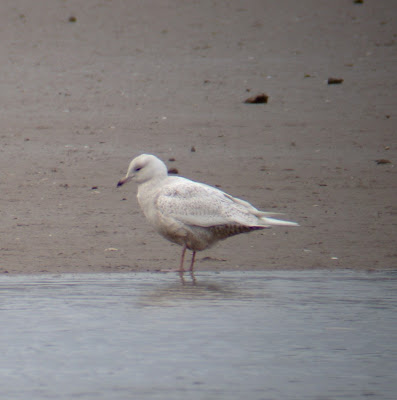 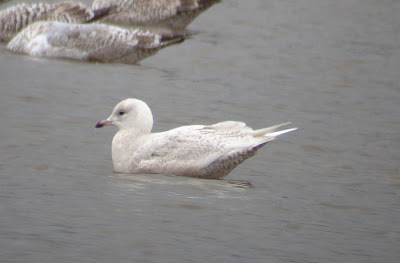 Here's a better view. I'm pleased with this photo, one of my better efforts I think. A really lovely looking specimen too!

Later on I bumped into Gav. He was looking at an Iceland Gull, "Is it new?" I asked. He replied " No, it's Derek" and so it was. Derek was on the tram shed roof, the new one had gone. After talking about the finer points of Iceland Gull ID for a while we decided to go to Colyford Common and look for a Sand Martin. Although I'm pretty sure we must have been there by 17:45 when Steve saw two of them fly up river, we didn't see them, not even with the aid of four eyes, two sets of bins and two scopes. Perhaps some of our optical equipment is past it's best!! :( We got the Little Egret total of 27 correct though, so at least we can still count.

The resident Barn Owl was still visible in it's nestbox, and as the evening wore on it kindly emerged and sat just outside the entrance, my second patch yeartick in as many days, ( the other being Crossbill of course.)

Here's another picture I took yesterday, when I saw this it made me smile because I remembered when we visited the Blue Cross animal shelter and picked out Rex ( we took an instant liking to him because he looked like a shredded wheat on legs). The staff there were a bit concerned that he wouldn't be able to get along with cats. 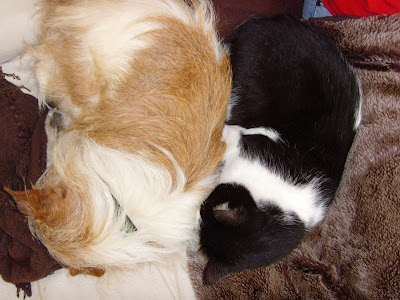 * This idiom is totally inappropriate because even if I saw a Caspian Tern and ' wrote home' about it, as it were. No one would give a monkey's. They'd say " A Caspian what? Oh, a Caspian Tern, what's a Tern?"
Posted by Karen Woolley at 9:20 pm

I've just dug out my sheaf of Iceland Gull prints...and it's Norman. Slightly more worn than nearly 4 weeks ago, but quite recognisable. Who said naming them was silly? 'Norman' - what could be more succinct and unambiguous? Well, I suppose a number would be shorter.