A Day of Mixed Emotions

This morning the Abberton Traps at Seaton Marshes ended in frustration when, with well over a dozen Shelduck feeding in the trap, it failed to activate properly and we caught nothing. Still it was a lovely morning to be on the marshes and the ducks were bound to be the same reckless bunch we caught on Saturday anyway.

After getting home it was time to feed the Skylark, she gobbled up her worms with relish but she was trying to tell me something, I got the feeling she was ready to go. I'd had her held captive now for 19 days and she was much, much better. Her flying wasn't exactly A1 yet but I figured she needed to be able to fly freely and more often so as to strengthen the wing up. She had been trying to fly within the confines of her small cage, which could do more harm than good. So before I changed my mind I put her in a small box, took her to Axe Cliff and gave her her freedom. I'd like to say she flew off strongly, but adequately would be a better description. She flew around 30yards or so before landing in the field, I got my bins from the car but failed to relocate her. I was happy to see her go but also worried it may all have been in vain. Oh well, I tried...

It was such a glorious morning I took the dog for a nice long walk along part of the coast path I was hoping to see a very early Wheatear, (not beyond the realms of possibility) but didn't. I was however very fortunate to get some superb views of a pair of these. 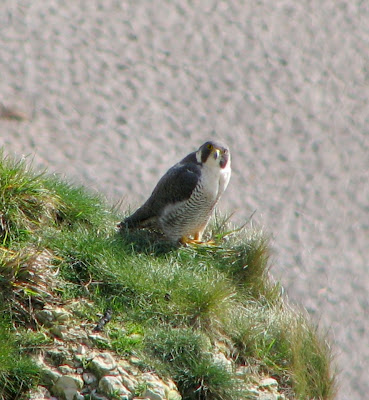 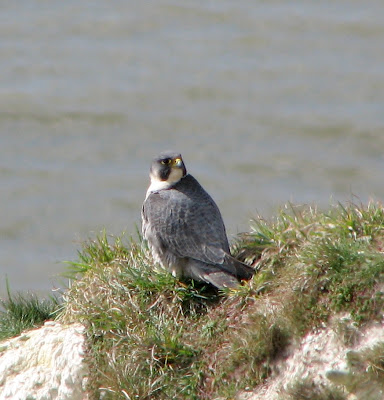 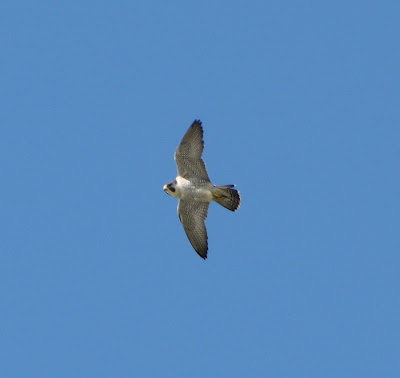 Magnificent! I felt really privileged that they allowed me such close views. They were a joy to behold!

I haven't mentioned where they actually were, obviously anyone with local birding knowledge will know already. I'm also not going to mention what they are either ( coz you can see that can't you?) so as to stop any persons with questionable motives from finding this post via a Google search. I've no doubt they're out there...

The real low point of the day occurred as I drove home from a visit to Colyton, during a small sleet storm. I was driving down a lane worrying how the Skylark would fair in this abrupt change of weather when I spotted a dejected looking Black-headed Gull squatting at the edge of the road. I stopped the car and approached it but it flew (rather weakly) further down the lane and just out of sight. I got back in the car and drove into a nearby lay-by, I was just getting out to go after the gull when a vehicle came towards me, a four by four with a young man at the wheel. It stopped and reversed rather urgently. 'He's seen the gull' I thought, 'Hope he's not hit it' Seconds later he came back and drove on. I drove back down the lane fully expecting to see the worst, But it was WORSE even than that!! He'd clearly run over it ON PURPOSE!! I was shattered. I know it's only one of millions of BHGs but it just made me ashamed to be part of the human race. Just to show I'm not exaggerating look at the evidence: 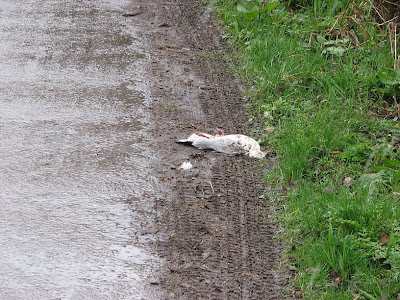 See how the tyre tracks show the vehicle swerved off the road in order to run over the helpless thing. I despair :(
After stopping in a lay-by for a little cry ( a bit (lot) pathetic I know), I pulled myself together and went to have a look at the handful of gulls on the river on my way home. I saw this nice Iceland Gull, quite a dark one, possibly the 'dark one' or 'Derek' if you prefer Gav. :p 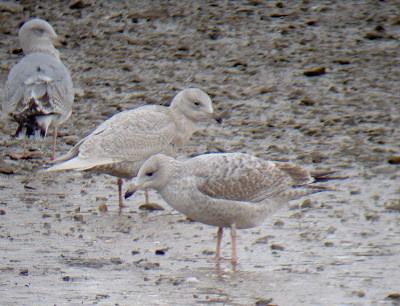 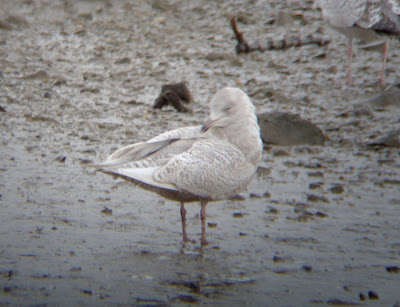 Is this Derek? Poor photos due to hand held camera AND scope!
Posted by Karen Woolley at 3:40 pm

I had a similar thing happen a few years back when someone deliberatly swerved to hit a pigeon I was trying to rescue from a dual carriageway. The only consolation is that 'they' are in the minority.

Thanks for the comments:)

Alan -I know your right. Fortunately 'they'ARE in the minority, which does make me feel better. I can only hope I don't encounter another one anytime soon that's all!